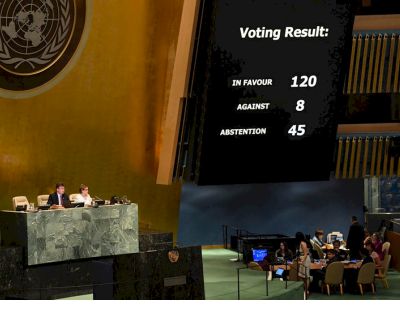 “It is disappointing that Canada was unable to take this simple stand for the sanctity of human life,” declared Thomas Woodley, president of CJPME.  Over the past several weeks, Israel’s violent repression of Palestinians in Gaza has led to the death of at least 129 Palestinians and injuries to over 13,000.  “Regardless of our relationship with Israel, we must be willing to condemn its senseless violence against civilian protesters,” continued Woodley.  However, CJPME acknowledges with appreciation that Canada broke a pattern of voting at the UN that typically puts it in a camp with Israel and the US.

Palestinians in Gaza have been protesting Israel’s historic confiscation of their lands and livelihoods, as well as the hardships resulting from Israel’s 12-year blockade on the territory.  Israel has been roundly criticized by human rights organizations around the world for its use of excessive and lethal force against Palestinian protesters.  Sarah Leah Whitson of Human Rights Watch suggested that Israel’s actions may amount to war crimes, adding, “Israel’s use of lethal force when there was no imminent threat to life has taken a heavy toll in life and limb.”

Israel and its supporters argued against the UN resolution, claiming that the country is being “singled out” by the UN.  CJPME counters that, rather than being singled out for criticism, Israel is repeatedly shielded from criticism and sanctions at the UN.  While the UN Security Council has imposed sanctions and punitive measures on other countries for far less, the UN repeatedly fails to intervene against Israel’s ongoing and illegal colonization of Palestinian territory in the West Bank, not to mention Israel’s many other human rights violations.  CJPME points out that the UN is simply holding Israel to the standard of international law it has set for itself.  “Israel cannot claim to be a liberal Western democracy,” states Woodley, “Yet expect to carry on like a rogue state violating human rights at will.”