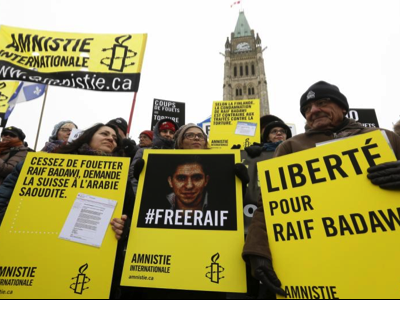 Montreal, August 6, 2018 — Canadians for Justice and Peace in the Middle East (CJPME) urges Canada to hold firm to its critique of Saudi Arabia, maintaining a principled stand for human rights activists who have been wrongfully imprisoned by the Saudi monarchy. Late last week, Global Affairs issued a statement calling on the Saudis to release arrested civil rights activists, including women’s rights activist Samar Badawi – the sister of imprisoned Saudi writer Raif Badawi. The Saudi monarchy has reacted by expelling Canada’s ambassador and freezing new trade deals between the two countries. CJPME urges the Canadian government not to back down on its criticism of Saudi Arabia’s human rights record.

CJPME points out that Riyadh’s aggressive reaction to Canada’s criticism reflects the increasingly erratic foreign policy pursued under Crown Prince Muhammad bin Salman’s (MbS) rule. While Canadian media has superficially portrayed MbS as an agent of reform, MbS has taken many aggressive actions to consolidate his power.  For example, MbS has ordered the arrests of dozens of dissenting scholars, ministers, and human rights activists. In fact, while the West has praised MbS’ move to allow Saudi women to drive as of June 2018, many have failed to note that a large number of women’s rights activists who originally pushed for the right to drive are still imprisoned by the Saudi regime.

Thomas Woodley, CJPME President stated, “It is time for our government to put human rights above commercial interests in its dealings with Saudi Arabia. If Canada wants to portray itself as a beacon for human rights around the world, the government will have to stick to its word.” CJPME notes that Amnesty International has called Saudi Arabia “one of the worst of the worst” in terms of human rights abuses.   Following the Saudi announcement, spokesperson for Foreign Affairs Minister Freeland, Marie-Pier Baril, asserted: “Canada will always stand up for the protection of human rights, very much including women’s rights, and freedom of expression around the world.”