CJPME Letter to University of Toronto Faculty of Law, re: Dr. Azarova 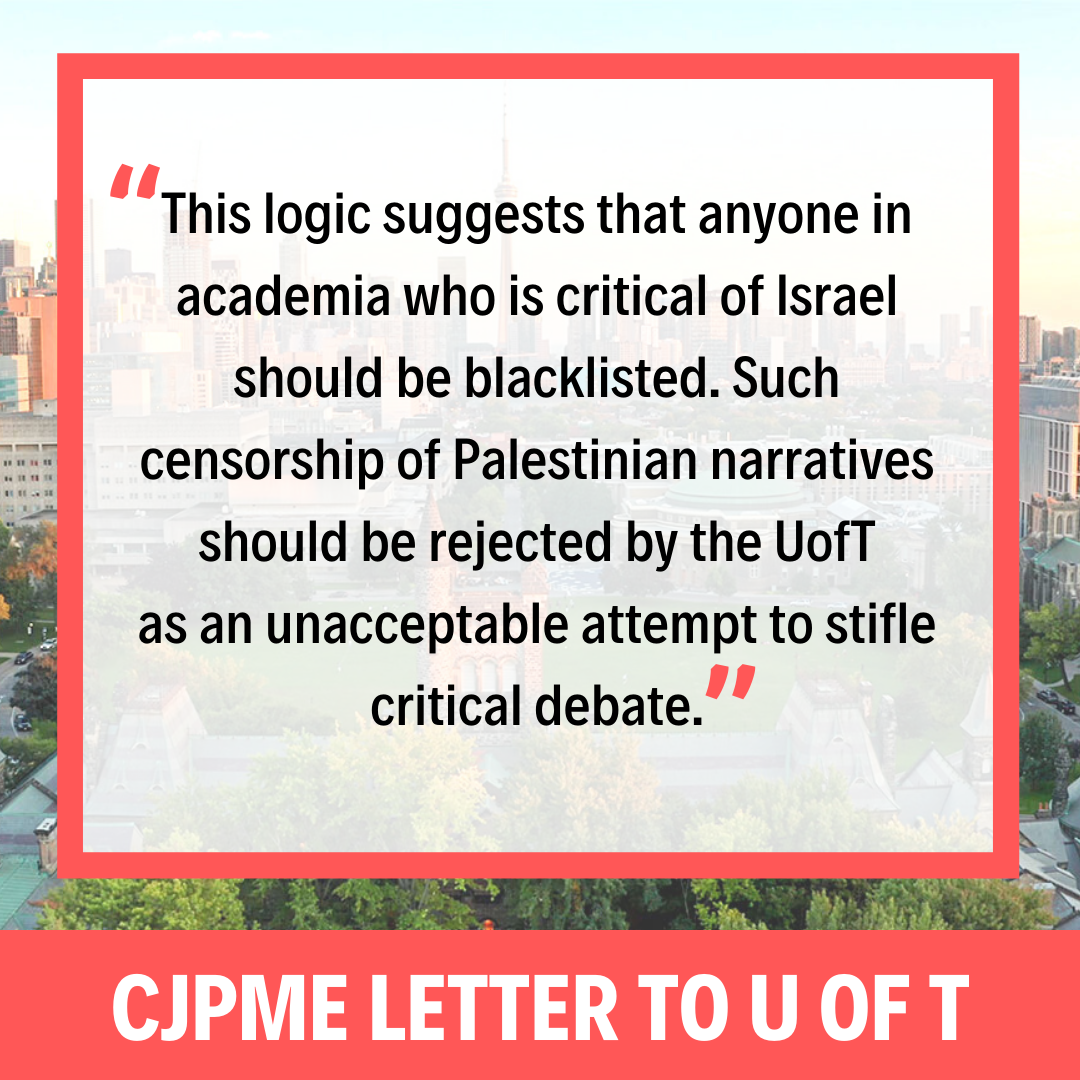 Letter to the University of Toronto Faculty of Law regarding the revocation of a job offer to Dr. Azarova due to her scholarship on Israel's occupation of Palestine, September 25, 2020.

I am writing to you as President of the Canadians for Justice and Peace in the Middle East (CJPME), a non-profit organization concerned with issues of justice, development and peace in the Middle East. We have been following the case of Dr. Azarova with great concern, and we alarmed by allegations that she may have been denied a job offer due to her scholarship critical of Israel’s occupation of Palestine. We are also disturbed by the suggestion that the revocation took place after a prominent donor complained to the school’s fundraising team.

If it is true that the university submitted to external pressure and effectively punished a scholar due to their research on human rights issue in Palestine, then action must be taken to correct this injustice. Whether it was your intention or not, the effect of such actions is to put a “chill” on academic research and conversations around the issue of Israel and Palestine, making it much harder to study and debate the human rights situation in Israel-Palestine. Ultimately, this will discourage and silence the discussion of Palestinian narratives within academia. The fact that the job was for director of the International Human Rights Program (IHRP) makes the incident particularly offensive, as it gives the impression that researching Israeli human rights violations disqualifies one from doing human rights work more broadly.

There are certain additional elements to this case which raise the plausibility that Dr. Azarova was dismissed for political reasons. According to the Globe and Mail, the judge in question who intervened about Dr. Azarova’s candidacy was Justice David Spiro. Spiro is a former board member of the Centre for Israel and Jewish Affairs (CIJA), the largest pro-Israel lobbying organization in Canada. CIJA has been open about its intent to combat what it considers “anti-Israel bias” in schools. In doing so, it frequently conflates criticism of Israel with antisemitism. Even more disturbingly, the revocation was praised as a “sound decision” in the Toronto Sun by the CEO of the pro-Israel lobby group B’nai Brith Canada, who argued that Dr. Azarova’s critical scholarship should have disqualified her from being considered in the first place. This logic suggests that anyone in academia who is critical of Israel should be blacklisted.  Such censorship of Palestinian narratives should be rejected by the UofT as an unacceptable attempt to stifle critical debate.

Finally, I would like to bring your attention to an open letter in support of Dr. Azarova which has been signed by over 1,000 lawyers and academics in Canada and around the world. CJPME fully endorses this letter and its demands. Alongside this group of esteemed colleagues, I demand that University of Toronto’s Faculty of Law immediately restore Dr. Azarova’s employment offer and issue an apology.

Should you wish to consult me further on this matter, I can be reached by phone or by email. I hope that this matter can be resolved quickly.