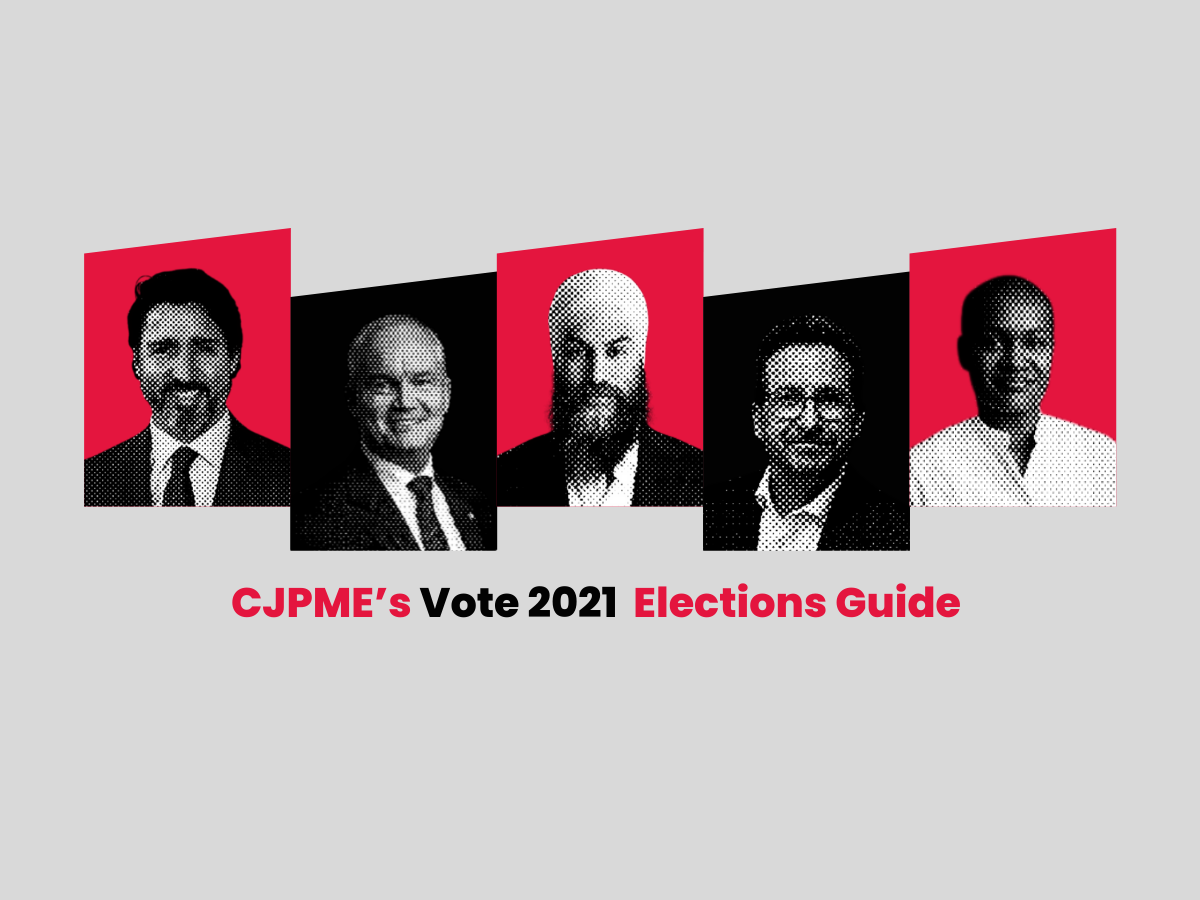 Montreal, September 8, 2021  — This week, Canadians for Justice and Peace in the Middle East (CJPME) issued its “Vote 2021 Elections Guide,” evaluating the record and promises of the five largest federal parties on Palestine-Israel and other Middle East issues. The guide evaluates the parties on ten different Middle East issues according to a number of different criteria, including 1) their support for international law; 2) their consistent application of international law; 3) their eschewal of armed violence; 4) their humanitarian concern; 5) their support for representative governance; and 6) their sense of urgency in responding to crises.

Among other issues, in its 50-plus page report, CJPME rated the parties according to how they responded to the escalation of Israeli violence in May of this year, as well as their positions on Canada’s pro-Israel voting pattern at the United Nations, humanitarian aid to Palestine refugees, the sale of weapons to Saudi Arabia, and six other key election issues.

“In this federal election, it is important that Canadians are aware of the important differences between the parties when it comes to advancing human rights in the Middle East,” said Thomas Woodley, President of CJPME. CJPME believes that principled international leadership will be critical for the Middle East in the coming years if the region is to see an end to some of its most contentious issues. “We hope that Canadians will use this guide as a resource for thinking about how to vote, and to challenge their local candidates on their parties’ positions,” added Woodley.

The Elections Guide covers the period since the last federal election in 2019. In its summary evaluation of the parties, the guide awards a mediocre C- to the current Liberal government, while the Conservative Party gets a failing grade. Meanwhile, the NDP receives a respectable A-, with the Greens and Bloc Quebecois not far behind (B and B-, respectively).

The Elections Guide is one of several resources that CJPME has prepared for the ongoing election. Notably, CJPME is also a coordinating partner in the non-partisan civil society “Vote Palestine” campaign, which recommends human rights-based policies on the issue of Palestine-Israel and asks candidates and their parties to endorse them.