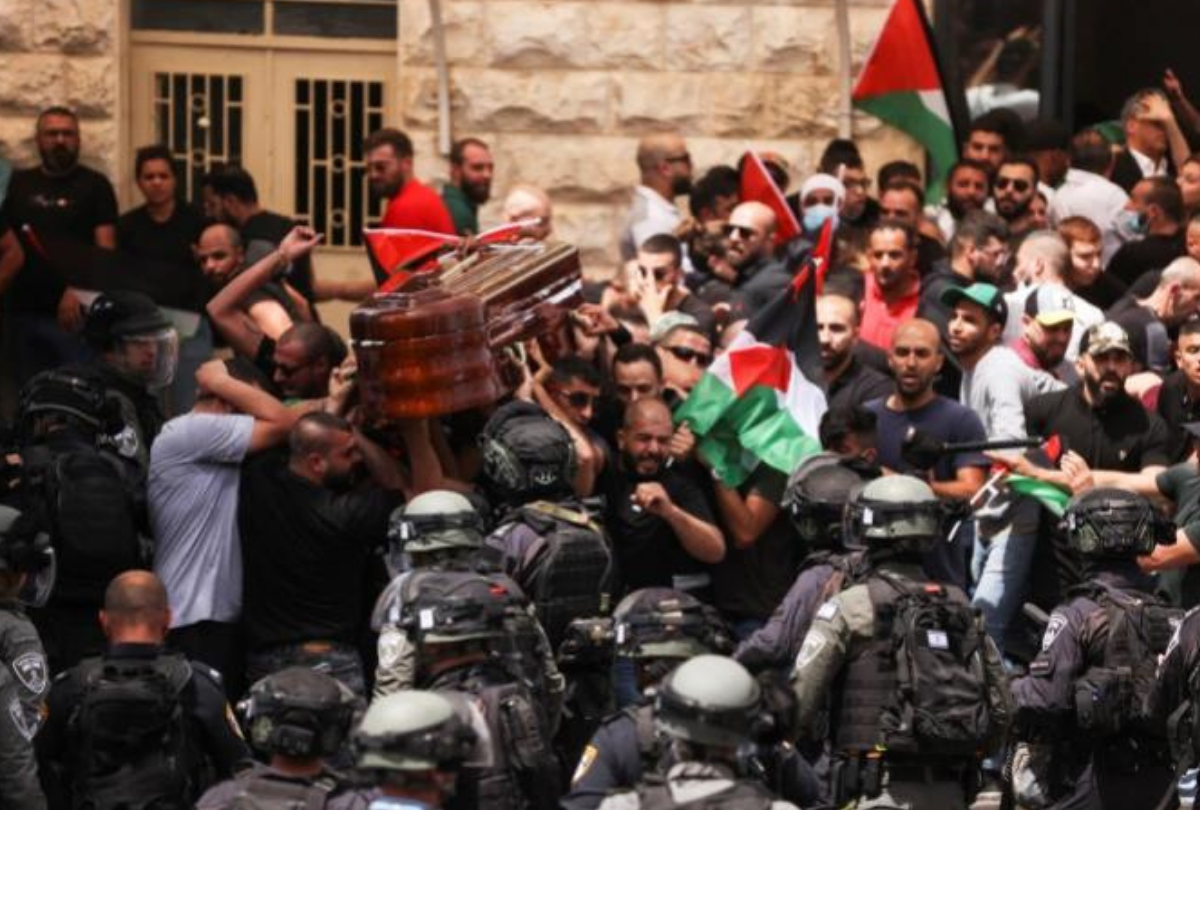 Montreal, May 13, 2022  — Canadians for Justice and Peace in the Middle East (CJPME) is calling on the Canadian government to condemn Israel over today’s attack on the funeral procession for Shireen Abu Akleh, an Al Jazeera journalist who was murdered by Israeli forces this week. During a funeral procession through occupied East Jerusalem today, Israeli forces invaded a hospital ground and attacked worshippers and pallbearers using batons and stun grenades, nearly causing the casket to fall to the ground. CJPME argues that Israel’s willingness to attack funeral mourners further demonstrates the need for an independent and international investigation that can hold Israeli officials accountable.

“This is a horrifying attack on the right of Palestinians to grieve, following the deliberate killing of a respected journalist,” said Michael Bueckert, Vice President of CJPME. “Canada must condemn Israel in the strongest terms and move immediately to refer Shireen Abu Akleh’s case to the International Criminal Court (ICC),” added Bueckert.

Video streamed by Al Jazeera from today’s attack on the funeral procession for Abu Akleh show Israeli occupation forces violently attacking the crowd of mourners, and firing stun grenades in the hospital courtyard. Videos show Israeli forces deliberately targeting and beating pallbearers with batons as they carry Abu Akleh’s casket, in an apparent attempt to make them drop the casket to the ground. Israeli forces also broke into Abu Akleh’s hearse to remove a Palestinian flag, and similarly arrested at least two people for raising the Palestinian flag. “This campaign of repression against Shireen Abu Akleh’s family, friends, and mourners, adds grave insult to injury and demonstrates Israel’s utter contempt for Palestinians in both life and death,” added Bueckert.

Today’s attack in Jerusalem comes only two days afters after veteran Al Jazeera journalist Abu Akleh was assassinated in the city of Jenin, by a bullet to the head. Her producer Ali Samoudi was also shot in the shoulder from the back. Reports from multiple journalists who were with Abu Akleh on the ground said that they were deliberately targeted by Israeli forces despite wearing press vests and helmets. On Thursday, May 12, a preliminary investigation by leading Palestinian NGO Al-Haq indicated that the crime was committed deliberately by Israeli soldiers.

Today, UN experts said that Abu Akleh’s death “may constitute a war crime,” and urged her case to be incorporated into the ongoing ICC investigation of alleged war crimes in Occupied Palestinian Territory (OPT). Only weeks ago, the International Federation of Journalists (IFJ), the Palestinian Journalists’ Syndicate (PJS) and the International Centre of Justice for Palestinians (ICJP) submitted a joint complaint to the ICC alleging Israel’s "systematic targeting of journalists working in Palestine," and recently announced that they will seek to add Abu Akleh’s case to their complaint.