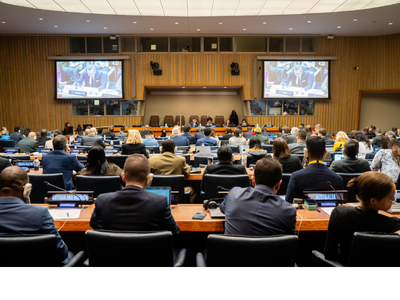 Montreal, November 15, 2022 — Canadians for Justice and Peace in the Middle East (CJPME) is angered by Canada’s opposition to a draft United Nations motion which would request a legal opinion on the illegality of Israel’s occupation. Last Friday, the UN’s Fourth Committee voted 98-17 to request the International Court of Justice (ICJ) to render an advisory opinion on the legal consequences of Israel’s “prolonged occupation, settlement and annexation of the Palestinian territory” occupied since 1967, with Canada voting in the minority against the resolution. CJPME considers Israel’s de facto “permanent occupation” over Palestinians to be inhumane and brutal, and urges Canada to support this necessary resolution when it comes to a final vote in the UNGA plenary before the end of the year.

“It is reprehensible that Canada should try to block a legal opinion on Israel’s actions in occupied Palestinian territory,” said Michael Bueckert, Vice President of CJPME. In 2003 and 2004, Canada abstained on similar motions regarding an ICJ advisory opinion on the construction of Israel’s separation wall, which found the wall to be illegal and ordered it to be torn down. In comparison, Canada has welcomed a recent ICJ ruling on Russia’s invasion of Ukraine, demonstrating a clear double standard. “Canada pretends to care about upholding international law across the board, but its overriding priority in this context is to provide diplomatic cover for Israeli crimes,” added Bueckert.

The draft resolution responds to a report by the UN’s Independent Commission of Inquiry which found that there are “reasonable grounds to conclude” that Israel’s occupation “is now unlawful under international law.” CJPME notes that international law does not outlaw temporary military occupation under certain conditions, although this comes with certain legal obligations per the Fourth Geneva Convention. The UN report, however, suggests that given Israel's intent to permanently maintain the occupation and its actions to effectively annex parts of the land, Israel’s occupation may now be illegal. Given these findings, a legal determination by the ICJ is a key step in holding Israel accountable.

The vote on Friday was part of a series of draft resolutions on Palestinian human rights adopted by UN committees, including motions to condemn Israel’s illegal settlements and to support the UN agency for Palestine refugees (UNRWA). According to internal documents obtained by CJPME through ATIP, many of these resolutions were identified by Global Affairs officials in 2019 as consistent with Canadian values and interests and thus worthy of support. Earlier this month, the Canada-Palestine Parliamentary Friendship Group chairs urged the government to vote in support of them. Nonetheless, CJPME is dismayed to note that Canada once again voted against them, continuing an unjustified pro-Israel voting record which began under former Prime Minister Stephen Harper. CJPME’s report reveals that Canadian foreign affairs experts believed that this approach was never based in “merit” and that it harms Canada’s reputation on the international stage.