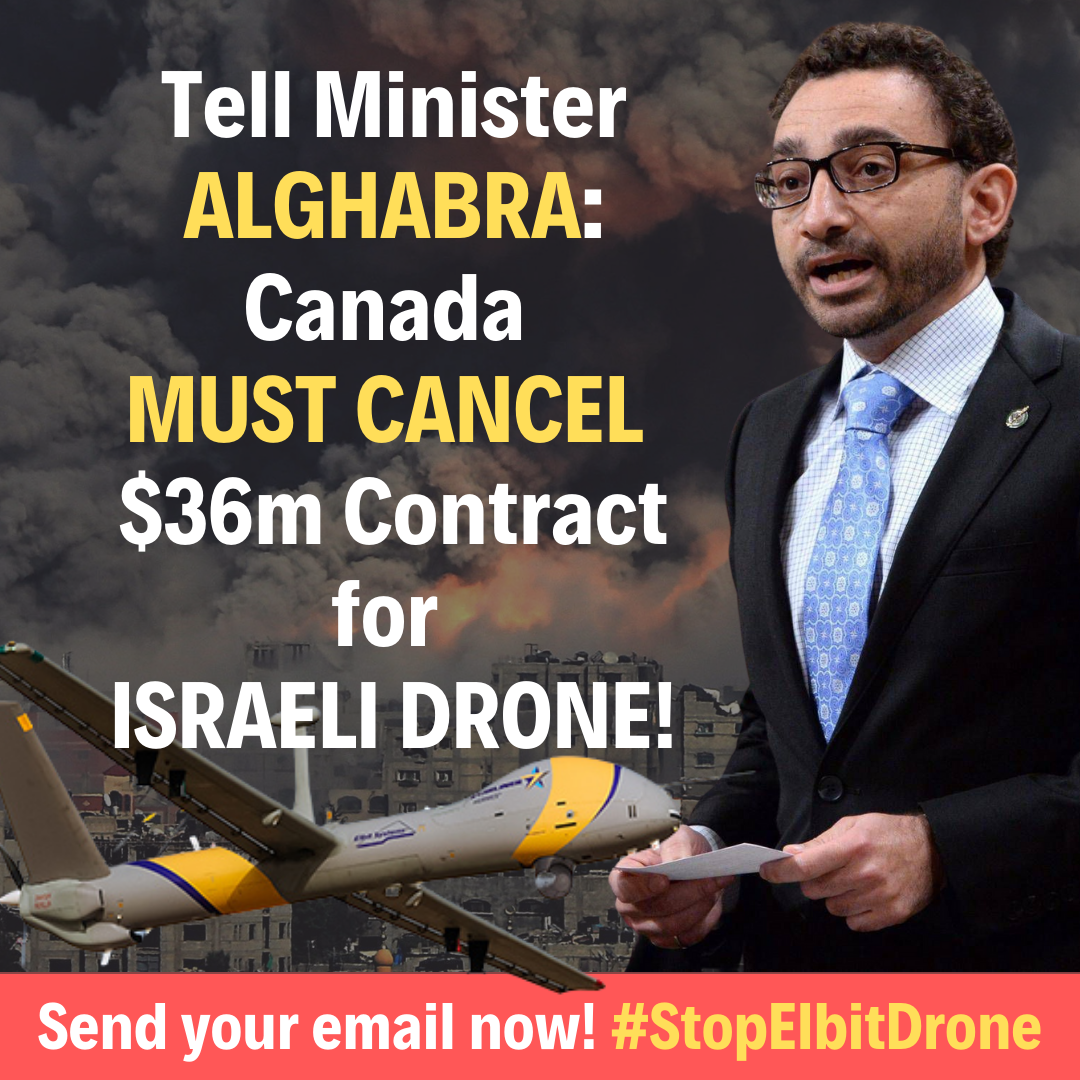 This page features additional information on Canada's drone contract with Israeli weapons company Elbit Systems. Click here to return to the signature page for this campaign. Click here to read about Myths and Facts about the campaign.

In December 2020, Canada signed a $36m contract with Elbit Systems, Israel's largest weapons company. The contract is for the Hermes 900 StarLiner, a “civilian” version of Elbit’s lethal military drone the Hermes 900. The contract also includes services such as communication links, ground control stations, sensor packages, and more. The purpose of the drone is for surveillance in the arctic.

The contract was announced in December 2020 by then-Transport Minister Marc Garneau (now Minister of Foreign Affairs), and the drone is expected to be delivered by December 2022. As it falls under Transport Canada’s national aerial surveillance program, the Minister of Transport Omar Alghabra is now responsible for the contract. To date, Alghabra has not made any public statements about the drone.

Despite the supposedly "civilian" nature of the purchased drone, the Hermes 900 StarLiner is reportedly “suitable for military and commercial applications” and can carry “electronic warfare payloads to provide airborne electronic attack capability.” Some of the optional Elbit payloads that can be added to the drone boast of being "battle-proven."

Elbit Systems proudly claims that the drone Canada has purchased draws on the “legacy” of its military drones. In fact, Elbit supplies 85% of drones used by the Israeli military to monitor and attack Palestinians in the West Bank and Gaza. The Hermes 900 was first tested during Israel’s assault on Gaza in 2014, when Israeli drone strikes alone killed 840 Palestinians, including 164 children. Famously, it was a missile launched by a Hermes 450 drone which murdered four children playing soccer on a beach that year. During the bombing, Elbit’s profits skyrocketed.

In May 2021, during Israel's attack on Gaza ("Operation Guardian of the Walls") which killed at least 253 people including 66 children, Elbit technology played a major role in the violence. Elbit's command and control technology system was used by the Israeli military to "accelerate the targeting process" that Israel used to coordinate its attacks on Gaza. Elbit's armed Hermes 450 and 900 drones were also used by the Israeli military to bombard Gaza with missiles. During this assault, 22 Palestinian civilians were killed by Israeli drone strikes.

During Israel's 3-day assault on Gaza in August 2022 ("Operation Breaking Dawn") which killed at least 49 people including 17 children, Israeli commanders boasted of hitting "dozens" of targets, "mainly using the Elbit Hermes 450," in addition to the role of the drones in performing extensive surveillance for the purpose of military targeting: "The whole of Gaza is ‘covered’ with UAVs that collect intelligence 24 hours a day."

In December 2021, Canada also awarded an $8.6m contract to Elbit Systems for its Torch X "battle management" technology, which is marketed as "field-proven" and had been used in Gaza in 2021 (see above). This will be used to support Canada’s “air missions” and “joint-task force operations.”

Elbit Systems has a Canadian subsidiary in Dartmouth, Nova Scotia, which produces equipment and technology for defence and surveillance.

Return to the campaign page to send an email to Minister Alghabra now!