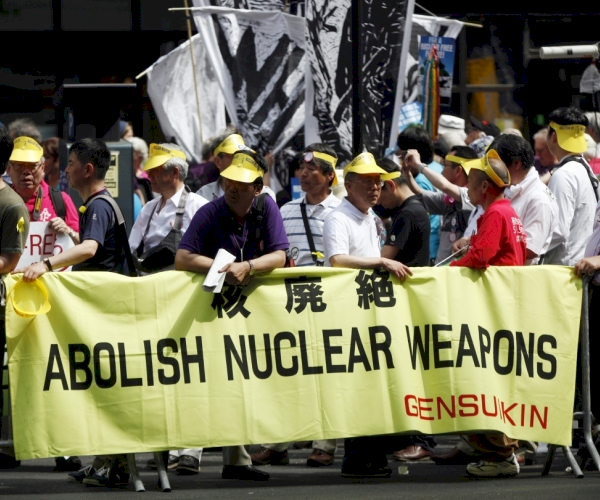 CJPME is pleased to publish the next of a 15 part election series analyzing the positions of Canada’s political parties. CJPME hopes that, by revealing what parties have said and done on key Middle East issues, Canadians will be better informed voters in the upcoming elections. The current analysis studies each party’s position on Canada's vetoing of the Nuclear Non-Proliferation Treaty at the UN in May, 2015, out of deference to Israel's opposition.

In May of 2015, the Harper government helped block an important UN plan to rid the world of nuclear weapons, entirely out of deference to Israel’s concerns about the plan.  While many Canadians may not have noticed this story, it had important and direct implications for the future stability of the Middle East regarding nuclear weapons.  Kowtowing to the interests of the Israeli government, the Harper government reneged on a years-long commitment to address the question of nuclear arms in the Middle East.  While the NDP was critical of this move by the Harper government, the NDP made no attempt to address the Israel-oriented motivation of the government.  As such, the NDP seemed to want to score points on the government’s shortcomings without demonstrating any moral or political leadership itself.  Despite its importance, the Liberals, Bloc and Greens did not weigh in on this issue.

In 2015, Canada helped block a UN plan to rid the Middle East of nuclear weapons while citing Israel’s security concerns, a move that was met with widespread international disappointment. Both Canada and Britain supported the United States in opposing a document at the United Nations calling on the UN to hold a disarmament conference on the Middle East by 2016. Such a conference could have obliged Israel to publicly acknowledge that it is a nuclear power – something it has never done.[i]

The 2015 decision added a new chapter to a long dysfunctional history relating to the NPT, described as follows: [ii]

On Canada’s refusal, Minister of Foreign Affairs Rob Nicholson issued a statement on 23 May 2015 declaring, “Canada can support only a legitimate Middle East WMD conference process that addresses the concerns of all states in the region, including Israel’s, and ensures their participation based on consent… It was with deep regret that Canada, alongside its close allies the United States and the United Kingdom, was unable to support consensus on today’s 2015 NPT Review Conference outcome document”[iii]

The question that first comes to mind is why would three NPT member states (Canada, the UK and the US) prioritize the interests of a non-member state (Israel) over those of all the other member states combined. More specifically, it is incredibly ironic that Canada would insist on trying to block a motion because a non-treaty member had not been consulted. As an analogy, imagine an international sporting association holding a conference to discuss rule changes to an international sport, and being told it can’t finalize a decision because a country which had chosen not to be a member had not been consulted.

Beatrice Fihn, spokeswoman for the International Campaign to Abolish Nuclear Weapons, a coalition of 400 non-governmental organizations in 95 countries, questioned the logic behind this move by asserting, “Three countries take their cue from a non-state party — Israel isn’t even part of the treaty — and thereby have this final say.”[iv] Canada’s move to block the UN plan and reach the required consensus, after four weeks of negotiations, means nuclear disarmament efforts in the Middle East have been blocked until at least 2020.[v]

Aside from comments and statements by Foreign Affairs Minister Rob Nicholson, Canada’s role in breaking consensus at the 2015 NPT Review Conference was welcomed by Conservatives. Speaking to the House of Commons on 3 June 2015, Conservative MP John Carmichael stated:

“Mr. Speaker […] We remain committed to upholding and strengthening the Nuclear Non-proliferation Treaty. However, like the U.S. and the U.K., we could not support consensus at the conference. We will never support any policy whose sole purpose is the isolation or the embarrassment of our greatest ally in the region […] Unlike the NDP, this Conservative government not only recognizes Israel’s right to exist but its inherent right to defend itself by itself.”[vi]

Also addressing the House of Commons on 3 June 2015, Chris Alexander, Minister of Citizenship and Immigration, concluded:

“Mr. Speaker […] Canada remains fully committed to upholding and strengthening the nuclear non-proliferation treaty. Under this Conservative government, Canada will only support a legitimate Middle East weapons of mass destruction conference process that addresses the concerns of all countries in the region, including Israel.”[vii]

The Harper government’s approach to the NPT continues its policy of “Israeli exceptionalism,” where the rules that are applied to everyone else are not applied to Israel.  By blocking the 2015 conference, Canada works to ensure that Israel remains the sole nuclear power in the Middle East for another five years.  Of course, such exceptionalism goes over badly with other countries in the region, which therefore have no incentive to respect the treaty themselves.

As the Official Opposition, the NDP was outspoken against the Canadian government’s role in breaking consensus at the 2015 NPT Review Conference. In fact, the only statements CJPME could find against this move by the Harper government came from the NDP.

In May 2015, NDP Foreign Affairs critic Paul Dewar stressed the importance of the NPT Review Conference for stability in the Middle East:

“When it comes to the Middle East, many have said this is the most dangerous place in the world to have nuclear weapons,” said Dewar. “If we can get other countries to abide by nuclear non-proliferation in the Middle East, then that can advance the cause globally.”[viii]

Speaking to the House of Commons on June 2nd, 2015, Dewar accused “Conservatives [of playing] the spoiler role by blocking consensus at the nuclear non-proliferation.”[ix] Dewar also questioned Canada’s resolve to rid the world of nuclear weapons:

“Mr. Speaker, while the international community is taking meaningful steps toward a world free from the threat of nuclear weapons, Canada is sitting on the sidelines [...] Why is the government not working with our allies constructively to free the world from nuclear weapons?”[x]

While all of the points made by Dewar are on-mark, it is important to notice how he does not make an issue of the Conservatives’ Israeli exceptionalism.  That is, Dewar decries the outcome of the conference, but fails to address the core issue with the Harper government’s approach: that it was based on a strategy to favour Israeli interests over all others in the region.

CJPME could find no statement issued by the Liberal Party regarding Canada’s role in breaking consensus at the 2015 NPT Review Conference.

CJPME could find no statement issued by the Bloc Quebecois regarding Canada’s role in breaking consensus at the 2015 NPT Review Conference.

CJPME could find no statement issued by the Green Party regarding Canada’s role in breaking consensus at the 2015 NPT Review Conference.