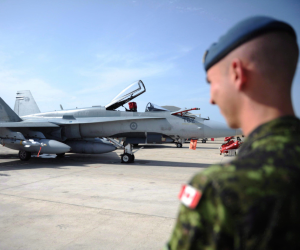 CJPME is pleased to publish the next of a 15 part election series analyzing the positions of Canada’s political parties. CJPME hopes that, by revealing what parties have said and done on key Middle East issues, Canadians will be better informed voters in the upcoming elections. Our next analysis studies each party’s position on Canada's militarily involvement against ISIS and its humanitarian commitment to Syria and Iraq. 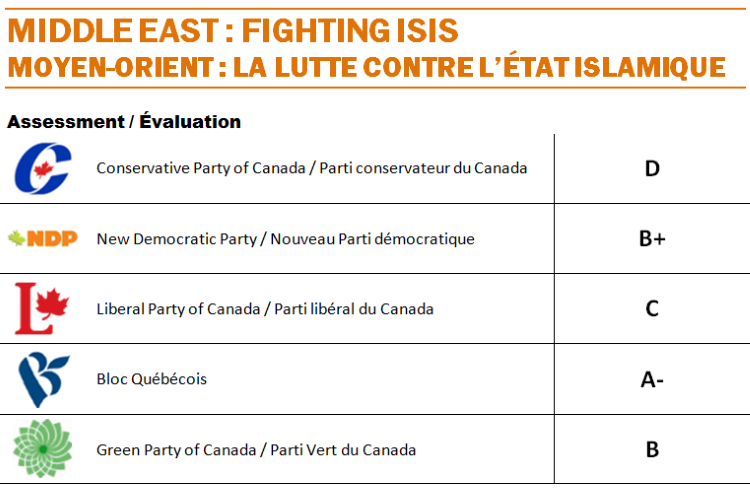 Canadians may have different opinions about whether Canada should be involved militarily against ISIS.  Nevertheless, given its mandate and principles, CJPME has rated parties based on 1) their support for international multilateralism, 2) their support for international law, and 3) their support for non-military (i.e. political or humanitarian) intervention.  Under these criteria, the Conservatives fare badly, as they joined a military coalition which had neither a UN nor a NATO mandate, and they failed to demonstrate much humanitarian commitment to Syria or Iraq.  The NDP, Bloc Québécois and Greens deferred more fully to international multilateralism, and also communicated more humanitarian concern.  The Liberals expressed concern, but wavered in their opposition to the military mission, making their motives for opposing unclear.

Under Conservative leadership, Canada has eagerly contributed to the “fight against terror”, actively engaging in military interventions abroad - even in the absence of a UN mandate. This included an active 12-year military mission in Afghanistan and contributions to the NATO-led mission in Libya in 2011.

Thus, the Conservative government’s willingness to participate in a ‘limited’ military campaign to “halt and degrade” the Islamic State of Iraq and al-Sham (ISIS) is not entirely surprising. The group had gained notoriety in 2014 for its acts of barbarism and meteoric rise in the midst of a power vacuum in the region. In turn, ISIS’ unchecked expansion has generated mass displacement and a humanitarian crisis in Syria and Iraq, and poses a threat to international security.

Under this pretext, the Conservative-dominated House of Commons voted on 7 October 2014 to join an ad-hoc coalition to bomb ISIS positions in Iraq for a period of 6 months. This motion to take military action was passed without support from the Official Opposition party, the NDP – a first in Canadian history.

In effect, the Canadian Armed Forces (CAF) began its military contribution, under the name “Operation IMPACT”, to the Middle East Stabilization Force (MESF) – the US-led multinational coalition currently engaging IS in Iraq and Syria. This includes the contribution of military supplies, military aircraft and fighter jets, as well as 600 military personnel to train Iraqi security forces.[1]

On 30 March 2015, the CAF Mission was extended for 12 months, and expanded its engagement into Syria. Canada’s airstrike campaign, along with its contribution to the fight against the Islamic State, is projected to cost taxpayers more than $500-million by March 2016.[2]

A point of contention is the mission’s expansion into Syria, to which PM Harper stated that Canada’s air force would not seek Syrian President Bashar Assad’s consent to bombard Syrian territory.[3] The shaky legal basis for this motion has indirectly placed Canada among a small list of nations that has broadened legal justifications for its intervention within sovereign nations. In turn, it has sparked a wrangling legal and political debate on the legal framework used by the government – i.e. Article 51 of the UN Charter, which focuses on the right of collective defence.[4]

The vigorous debate in Parliament also revolves around the Mission’s substantial cost and the ill-defined limits of Canada’s engagement in Iraq and now Syria, which has prompted opposition over fears of being embroiled in an open-ended quagmire in the Middle East.

The Conservative government has aggressively pushed for a military role against ISIS, characterizing Canada’s engagement as absolutely necessary in order to protect Canadian citizens. In this light, Prime Minister Stephen Harper’s speech emphasized the security threat that he felt ISIS potentially posed to Canada, as he sought to bring the issue close to home. He stated in his speech to Parliament that ISIS seeks to “specifically target Canada and Canadians, urging supporters to attack ‘disbelieving Canadians in any manner’, vowing that we should not feel secure even in our homes”.[5]

In parallel, the Tories have painted the military campaign as a conscientious undertaking that promotes Canada’s moral values abroad. PM Harper illustrated this approach by stating, “[w]e do not stand on the sidelines and watch [...] [w]e do our part”.[6] According to opinion polls, this strategy had some success in gaining public support, despite clear opposition from both the NDP and the Liberal Party.

Over time, the Conservative Party began altering its position on Canada’s “limited” engagement. Foreign Minister Rob Nicholson stated that the Canadian government is “in this for the longer term to make sure that we do what we can to help”, alluding to Canada’s prior Afghanistan as a reference point.[7] This change in rhetoric had the goal of facilitating a motion to extend Canada’s engagement beyond the limitations of the original mission.

The extension passed Parliament under the same pretext of having a “moral obligation” to combat terrorism – once more without support from the opposition.  Faced with fierce criticism for this extension, Harper has accused both Trudeau and Mulcair of “irresponsible electoral politics” for opposing the mission.[8]

The Conservative Party later undermined its “moral high ground” positioning by later doing a certain amount of fear-mongering that used the threat of ISIS as political capital for a hawkish Tory agenda. This is best exemplified by its controversial ad campaign attacking Liberal leader Justin Trudeau, which unabashedly manipulates ISIS imagery as part of a smear campaign to make the Liberal Party look soft on terror.

PM Stephen Harper has positioned himself as a “man of action,” seeking to uphold Canadian values against the brutality of ISIS. However, the Conservative government has consistently failed to spell out the details of its combat mission, releasing information sporadically, which belies the conditions of the original engagement.

The NDP has consistently opposed Canada’s involvement in the coalition against ISIS, preferring to limit Canada’s role to providing humanitarian aid and supporting minority rights. To that end, it has continuously criticized the Conservative government for its impetuous decisions and eagerness to engage ISIS. NDP Leader Tom Mulcair has also expressed his desire to bring the mission to an end, should he be elected prime minister.

Key among its points of opposition, the New Democrats claim that the objectives of the mission are poorly defined and the mission lacks a clear exit strategy. They have painted the mission as a dangerous endeavour that serves a political purpose at the expense of the Canadian troops that are being deployed. Mulcair specifically stated, “They have no strategy other than a political one, and that is putting our troops in danger”.[9]

The NDP has also questioned the legal basis for Canada’s involvement, given that the mission is not mandated by any authoritative international body. On this issue, Muclair stated that he would support Canada’s involvement in a UN or NATO mission against ISIS, but not an “American-led mission”.[10]

The death of Sergeant Andrew Joseph Doiron by friendly fire reinvigorated NDP’s criticism of the mission. Mulcair asserted that PM Stephen Harper had misled the Canadian public on the true nature of Canada’s involvement in Iraq.  Mulcair also feared that Harper would use the incident with Doiron to obtain an extension to the mission.[11]

As such, the NDP was fiercely opposed to the mission’s extension. NDP Foreign Affairs critic Paul Dewar commented, “We’ve gone from what I call ‘mission creep’ to ‘mission leap’”.[12] The NDP has further expressed its concern over the mission’s expansion into Syria. It holds that activities in Syria against ISIS targets would only serve to strengthen the position of Syrian President Bashar al-Assad to continue violating international law.[13]

Unlike the NDP, the Liberal Party has vacillated in its position towards the Canadian combat mission against ISIS. The Liberals voted against the initial 6-month deployment, arguing that it preferred humanitarian action over military force. Since then, the Party has been shifting its position, apparently in an attempt to garner popular support while opposing the Tory government.

The Party’s opposition to the combat role of the Canadian Armed Forces is clear. Much like Mulcair, Liberal Party leader Justin Trudeau had explained that he would withdraw the Armed Forces from a combat role, should he be elected. Furthermore, he explained that the “Harper government has failed to demonstrate why bombing is necessary and hasn’t been honest about the objectives and the cost of the mission”.[14] This prompted the Liberals to vote against the extension of the combat mission in March.

Where the Liberals differ from the NDP is in their support to train Iraqi troops against ISIS.  Trudeau stated that he would send more military personnel in a non-combat role to help train Iraqi troops, without specifying how many more.[15] When asked how this played into the Liberals’ opposition to the mission, MP Marc Garneau stated, “The part we had a problem with was the involvement of the CF-18s […] there were better ways to use Canadian resources”.[16]

The reason for this subtle shift has to do with maintaining party unity and popular support. On the one hand, former Liberal MPs and senators have criticized the Party’s vote against the mission; this includes past interim leader Bob Rae, former Foreign Affairs Minister Lloyd Axworthy and former Liberal senator Romeo Dallaire. Their criticism points to the Liberal Party’s failure to adhere to the “responsibility to protect” doctrine.[17] In regards to popular support, a March poll by Ipsos Reid revealed that most Canadians, including some 67% of Liberals, support the mission.[18]

Ultimately, given its ‘flip-flopping’ on the issue, the Liberals have failed to demonstrate that any particular principle drives their policy.  Publicly, the Liberals project a very ambiguous position on the intervention: one that backfire politically on them.

The Bloc has opposed the extension of the combat mission. The Bloc has seemed to follow the lead of the other opposition parties in criticizing the Conservative government on its decision to deploy Canadian forces without the approval or the UN. Former Bloc leader Mario Beaulieu acknowledged the need to act against the depraved barbarity of ISIS, but urged that any response should be relayed through the Security Council.[19]

Beaulieu criticized PM Stephen Harper directly for what he characterizes as a “blank cheque” motion to combat terrorism – alluding to the calamitous pre-emptive policies of the Bush administration – which he deemed ineffective.[20]

The Bloc has been even more vocally opposed to the expansion of the mission in Syria. The Deputy of Bas-Richelieu-Nicolet-Becancour, Louis Plamondon, criticized the motion and the Conservatives’ appeal to Article 51 of the UN Charter. Plamondon argued that using the principle of collective defence to bombard Syria is an “erroneous interpretation” that would set a precedent for Canada to intervene wherever it sees fit.[21]

In essence, the Bloc has advocated a course that promotes multilateralism and international law. It has expressed fears of becoming embroiled in a conflict that could be morally questionable and may end up aggravating the situation in the Middle East.

Like the other opposition parties, the Green Party is opposed the combat mission, claiming that the bombing campaign is likely to do more harm than good. Green Party leader Elizabeth May has expressed concern over the shaky legal framework for a military campaign that does not have UN approval. She pointed to Canada’s “betrayal” of the Responsibility to Protect in Libya, suggesting that this mission could lead Canada to pervert the principle further.[22]

The Green Party claims that the Tories have a misguided foreign policy, which will put into question Canada’s adherence to international law. It has also admonished Canada’s involvement in Syria, claiming that any efforts against ISIS in Syria would only serve to strengthen the Assad regime.