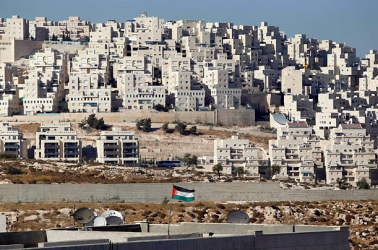 CJPME is pleased to publish the next of a 15 part election series analyzing the positions of Canada’s political parties. CJPME hopes that, by revealing what parties have said and done on key Middle East issues, Canadians will be better informed voters in the upcoming elections. Our next analysis studies each party’s position on the Palestine-Israel conflict and the negotiation process. 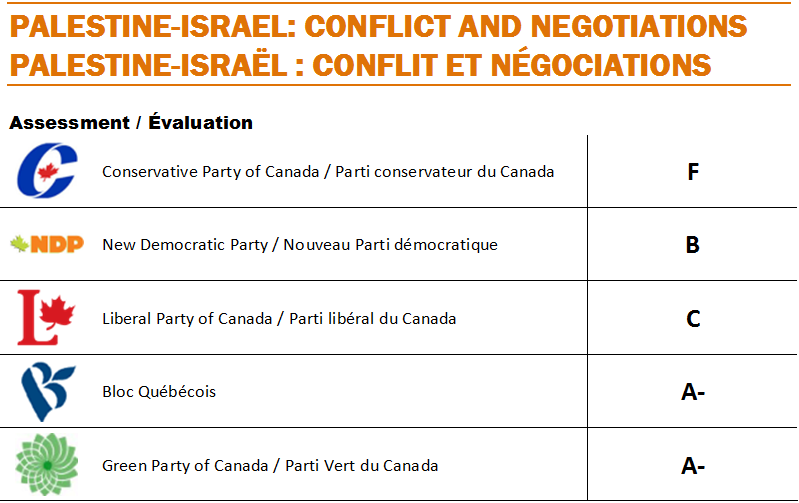 The Harper government seems content with the violent status quo in Israel-Palestine as much as the Israelis themselves. In every respect, it has taken its lead from Israel’s leadership vis-à-vis this conflict. The NDP continues to support the international consensus for a two-state solution, although its clarity on this point has been undermined in recent years. The Liberals, as with so many Middle East issues, repeatedly give a mixed message. The Bloc Québécois and the Greens have been most specific on the primacy of international law, and UN resolutions on the Israel-Palestine conflict. CJPME looked at the parties’ statements relating to their 1) urgency for a solution to the Israel-Palestine conflict; 2) alignment with the two-state solution; 3) Palestinian statehood, and other pronouncements. CJPME judged the parties’ positions based on 1) adherence to international law, and 2) alignment with the two-state solution. CJPME itself does not take a position on the viability of the two-state solution.

On July 29, 2013, US-sponsored talks between Israeli and Palestinian representatives resumed after a four-year hiatus. The preconditions for the talks included a settlement freeze and a prisoner release by Israel in exchange for the Palestinians holding off on seeking further memberships in UN bodies.  The meetings began in the summer of 2013 with the issues to be discussed including: land, borders, “settlements,” the future of Jerusalem, refugees, and security.

Settlement Expansions: The single most significant factor preventing progress during the talks was Israel’s intensification of “settlement” construction in the occupied Palestinian territories (oPt), in violation of international law, official US policy, and one of the preconditions for the talks.

Palestinian actions at the UN: The US and Israel allege that Palestinian accession to various UN bodies undermined the peace talks and violated one of the preconditions.[3]

In November, 2013 the UN General Assembly passed a resolution calling for two democratic states, Israel and Palestine, living side by side in peace within secure and recognized borders by 165 votes to 6, with 6 abstentions. Despite its professed support for the two-state solution, Canada under Harper was among the six countries that voted against the UN resolution.  Unfortunately, Canada’s Liberal party might have cast the same vote.

Despite Israel’s continued illegal settlement building in the West Bank and East Jerusalem and its refusal to accept a Palestinian state on even 22% of historic Palestine, the Conservative-led Canadian government has opted for a pro-Israeli rhetoric when discussing the Israeli occupation, the Peace Process and the latest Gaza War of 2014. Canada has repeatedly sided with Israel against world opinion and common sense, becoming, at least diplomatically, the most pro-Israel country in the world.

In one example, in July 2011, Chris Day, spokesman for Foreign Minister John Baird stated, “Our government's long-standing position has not changed. The only solution to this conflict is one negotiated between and agreed to by the two parties. One of the states must be a Jewish state and recognized as such, while the Palestinian state is to be a non-militarized one.”[4]  While the demand that Israel be recognized by the Palestinian leadership as a “Jewish state” is one that Israeli leader Netanyahu had imposed, it is not one that the international community has embraced as part of the two-state solution.  That Canada would ape this demand of Netanyahu’s demonstrates how far the Harper government has deviated from the international consensus on the two-state solution.

The Conservatives endorse a two-state solution in theory but the Harper government opposed the Palestinian statehood bid in 2013. Canada also plays down Israeli settlement criticism, failing to acknowledge that land grabs and Israeli colonies represent the most serious obstacle to peace. In December 2012, for instance, Canada stood apart from some major allies, the U.S. included, in refusing to condemn Israeli plans to build 3,000 settler homes in the West Bank and east Jerusalem to punish the Palestinians for winning greater recognition at the United Nations General Assembly. While Canada’s Foreign Affairs website declares that settlements are “not legal,” Harper refuses to say so publicly.[5]

Even when Israeli Prime Minister Benyamin Netanyahu said in a televised interview the day before the 2015 Israeli general election that there would be no Palestinian state under his watch,[6] Prime Minister Stephen Harper congratulated Netanyahu and reaffirmed that “Israel has no greater friend than (Canada),”[7] while failing to mention the two-state solution, or Netanyahu’s other promise to continue expanding what most of the international community considers illegal settlements on land claimed by the Palestinians, and constitute the most serious obstacle to achieving a comprehensive, just and lasting peace.

It is fair to say that the NDP has been nominally supportive of the international two-state solution consensus over the past several elections. The NDP’s 2011 election platform stated (Section 6.3), “We will work with partners for peace and justice in Israel and Palestine, within a framework of respect for United Nations resolutions and international law. This includes recognition of the right of both Israelis and Palestinians to live in peace in viable, independent states with negotiated and agreed-upon borders.”

While the NDP has demonstrated a long-time recognition of the UN institutions and international law, it is worth mentioning that its 2011 election platform dropped some key specifics as compared to the official NDP position of 2008. The 2008 NDP platform read: “Work with partners for peace and justice […] with negotiated, agreed-upon borders; no settlements remaining in the Palestinian state; an end to Israeli occupation of Palestinian land; an end to loss of life of innocent civilians; and an international peacekeeping presence.”

Unfortunately, the 2011 NDP statement is clearly weaker than the 2008 one, and the reasons for this increased ambiguity are unclear.  Worse, the NDP has yet to release any Middle East platform for the 2015 election.  Nevertheless, the party has been more consistently supportive overall of the international two-state solution consensus than the Conservatives or Liberals.

Officially, current Liberal Party policy on the Middle East has not changed dramatically since the era of Mike Pearson, Pierre Trudeau, and John Turner. A Liberal platform available at the beginning of 2013 indicated that “[...] Liberals believe in a two-state solution and that the region will only be genuinely stable when a safe, secure and democratic Israel exists in peace beside a viable, secure and democratic Palestinian state. […] We should facilitate dialogue between Israel, the Arab world and Palestinian leadership.”[8]

Nevertheless, during Bob Rae’s tenure as Liberal leader, the party did not distinguish itself much the Conservatives’ position on Palestinian statehood, or the two-state solution.  When the PLO successfully bid for recognition of Palestine as a state by the UN General Assembly in November, 2012, Liberal leader Bob Rae stated that he opposed the motion.[9]  Days later, Liberal Foreign Affairs critic Dominic Leblanc stated on CBC’s Power and Politics programme that the Liberal Party disagreed with the government’s “volume” in opposing the Palestinian move, but “we don’t necessarily disagree with the way the government voted” at the UN.

As Liberal party leadership candidate, Justin Trudeau was critical of the Harper government’s approach, saying in September 2011, “Certainly from what is public … I don’t get the impression that this government is trying to bring the two sides together.”When asked if he thought the Harper government was too favourable towards Israel, Trudeau was harsh in his criticism of the political strategies of the conservatives – their way of “polarizing the debate” domestically and using it as a “political football” – to pressure other parties, though he never said he was opposed to their positions. In actuality, he has never publicly declared support for a solution to the conflict that would be fair to the Palestinians, while he has repeatedly stated his strong support for Israel.[11]

Nevertheless, in a more positive note, Trudeau did clearly express the need for a “safe and secure” Palestinian state in speeches and interviews in August, 2014 during the Israel-Hamas-Gaza conflict.  “It is only through negotiation and co-operation with the international community that we will arrive at the two-state solution that so many believe is key to ending hostilities in the region. A safe and secure Israel can only exist when it exists next to a safe and secure Palestinian state – one with an economy that creates jobs, a social safety net that protects the vulnerable, food that gets to the people who need it, infrastructure that meets people’s needs, and a government that is responsive to its citizens. Then, Palestinians and Israelis will be free to enjoy the kinds of freedoms that we are so fortunate to enjoy here in Canada.”[12]

So, again, mixed messages from the Liberals, with both encouraging and disappointing moments.

During Israel’s latest attack on Gaza in 2014, Mario Beaulieu, Leader of the Bloc Québécois, denounced the Canadian government’s unilateral position fueling the conflict, with the silent complicity of NDP and Liberal’ leaders, Mr. Trudeau and Mr. Mulcair.[13]

“We demonstrate for a durable ceasefire and for a real and peaceful solution to the [Israel-Palestine] conflict.  The Bloc’s participation in this demonstration does not suggest any support for Hamas, which does not recognize the existence of Israel, but we denounce the violation of international law by the Israeli government.  A permanent end to the violence and a return to peaceful negotiations requires that all parties respect applicable UN resolutions, those calling for the self-determination of the Palestinian people, as well as those calling for a lifting of the blockade of Gaza and those calling for an end to the illegal colonization under Israel’s military occupation.”[14]

Article 11 of The Planet Needs Canada (and Vice Versa), Part 5 of Vision Green, the Green Party platform, underlies the party supports of a two-state solution to the Israel-Palestine conflict that addresses the security, economic, and religious concerns of both sides.[15] The party also passed a resolution during its 2014 Convention, and coded G14-P58, “[adopting] a posture of engaged neutrality, opening all available diplomatic avenues in both Palestine and Israel to press for a peaceful resolution to the conflict.”[16]

[3] Wilner, Michael. “In major speech, Indyk opens up on 'breakdown' of Israeli-Palestinian peace talks,” The Jerusalem Post. May 9, 2014.

[11] “CJPME Assessment of the Liberal Leadership Candidates on Middle East Policy,” Canadians for Justice and Peace in the Middle East, April, 4 2013