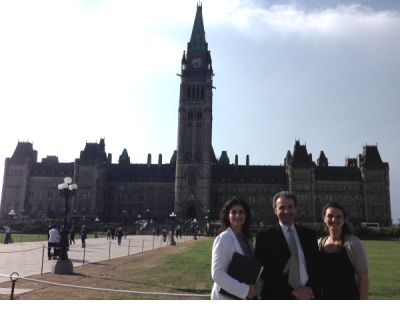 Unless you look back once in a while, you forget how far you’ve come. That’s the way we feel about the first eight months of 2017. It’s been an adventure, but with many big strides forward. As we launch our fall activities, please check out our accomplishments already this year!

CJPME Talks to Dozens of MPs on Parliament Hill.

CJPME delegates met about 60 members of Parliament through the Spring months, talking to them about what Canada needs to do vis-à-vis the Israel-Palestine conflict, the Syrian civil war, the international arms trade treaty, and other issues.  We gave all MPs a map of the West Bank showing Israel’s illegal “settlements,” our survey results (see above) and other position papers and factsheets.  We do our best to make sure MPs get the facts, whether about Israel-Palestine, or on other human rights issues.

This past Spring, CJPME consulted with the Bloc Quebecois to help finalize the wording of a Bloc parliamentary motion supporting Palestinian statehood. CJPME was invited to a launch ceremony on Parliament Hill to commemorate this courageous step.

CJPME was thrilled to host Prof. Tariq Ramadan for a series of five talks across Canada: Calgary, Edmonton, Mississauga, Toronto, and Montreal in January.  Ramadan is a Muslim philosopher, writer and academic currently at Oxford.  His talks on how to creating thriving multicultural communities in the West were extremely well received, and attracted crowds of hundreds everywhere he spoke.

Left: CJPME hosted Prof. Tariq Ramadan in six cities across Canada in January; Centre: CJPME made several trips to Parliament Hill in May and June to meet with Members of Parliament; Right: CJPME supported the Bloc Quebecois before it announced its motion in support of Palestinian statehood in May.

For years, Canada’s pro-Israel lobby groups have argued that most Canadians sympathized with Israel. Thanks to an EKOS Research poll co-sponsored by CJPME in February, we now know what Canadians really think! And the pro-Israel lobby is not happy with what we found. The results were striking: Far more Canadians have a negative view of Israel; but they perceive the Canadian government as biased toward Israel. Canadians overwhelmingly believe that criticizing Israel is not anti-Semitic, and believe that government sanctions on Israel would be reasonable. And those are just a few of the findings! See the full results on our Website.

The EKOS Research Survey co-sponsored by CJPME revealed the strong support among Canadians for greater political and economic pressure on Israel.  Above are the results of two of the eight survey questions.  All the results are on the CJPME Website.

CJPME Campaigns Against Islamophobia in Canada.

CJPME was very active this past year combatting the rise of Islamophobia in Canada.  CJPME helped to bring attention to the issue in a number of different ways, foremost in a campaign to push MPs to support motion M-103 condemning all forms of racism in Canada, including Islamophobia.  The Quebec City mosque attack early this year reminded the country how deadly Islamophobia can become, and CJPME and its allies are working hard to oppose the spread of this insidious ideology in Canada.

Just last month, CJPME published its assessment of the four NDP leadership candidates based on their positions on Middle East issues.  As a testament to CJPME’s credibility, each of the candidates had responded to a questionnaire on ten urgent issues that CJPME and IJV had prepared.  Based on this questionnaire, and CJPME’s additional research on the candidates, CJPME issued its comprehensive assessment.  The assessment received very good feedback, with candidates posting the assessment to their social media accounts.

CJPME has supporters of all different political beliefs, and tries to serve all its supporters by pointing out opportunities and providing useful analyses.  With this in mind, we strongly encouraged progressive supporters to get involved in choosing the next NDP leader.  First, when pro-human rights leadership candidate Niki Ashton was attacked by pro-Israel B’nai Brith, we encouraged our supporters to reach out and defend Ashton.  Second, we encouraged Canadians whose values align with those of the NDP to vote in the upcoming NDP leadership race.

Left: CJPME representative Grace Batchoun challenges NDP leadership candidate Jagmeet Singh on his Middle East policies; Centre: CJPME issued a comprehensive analysis of the Middle East positions of each of the four NDP leadership candidates; Right: In its analysis, CJPME scored Niki Ashton as A+, Jagmeet Singh as A-, Guy Caron as B=, and Charlie Angus as B.

In 2015 and 2016, CJPME co-sponsored almost 10 Syrian refugee families.  Many of our supporters gave money to enable this support – and we thank you.  Imagine our pleasure and excitement when the first of these families arrived in Canada earlier this year.  So far, two families have arrived, and we still await many more.  While CJPME is not a “refugee resettlement” organization per se, we could not ignore the obvious need for Canadians to do all that they could for Syrian refugees.  Thanks to our like-minded supporters who helped make this possible.

Since the beginning of the year, CJPME has been following up with the Trudeau government to ensure that Canada’s funding to the UN aid agency for Palestinian refugees (UNRWA) continued in 2017.  We met with well-placed MPs and officials at Global Affairs Canada.  Our follow-up was rewarded in August when the government announced $25 million for UNRWA programs.  CJPME’s president was thank for our support by an UNRWA official, who wrote, “Thanks… for your support to UNRWA, especially in recent days which has been noticed and appreciated by… UNRWA.”

Right: The first Syrian family co-sponsored by CJPME arrived in Montreal in June. Six more families are due to arrive in the coming months; Left: CJPME's efforts helped ensure another $25 million in Canadian funding this year for the UN agency for Palestinian refugees.

In an evolving media landscape, organizations like ours must be extremely agile to reach as many people as possible.  For this reason, CJPME has become increasingly involved in producing semi-professional videos that can be shared on cell phones, YouTube, Facebook and other platforms.  Our video series, “50 Years of Occupation” reached hundreds of thousands of Canadians via Facebook, and covered issues such as Israel’s illegal “settlements,” Israel’s Wall, Palestinian political prisoners and more.  These were just a few of the powerful videos that CJPME produced.

CJPME leaders have published dozens of op-eds on Canadian media platforms since the beginning of the year.  Whether on Huffington Post, rabble.ca, Ricochet, the Toronto Sun, or more, we find that this is one of the best ways to make progressive, pro-human rights positions made known to the Canadian public.  Average Canadians may not come to our Website, but they’re reading articles on the Web, and that where they’ll find our important perspective.  Here are just a few recent examples:

CJPME has issued Position Papers, Press Statements and Factsheets on many key issues since the beginning of the year.  Some of the highlights are below: