CJPME Political Blog, March 19, 2015: There was no shortage of surprises and last minute twists with the recent Israeli elections.  Many on the left were disappointed to see Netanyahu’s Likud party come out on top again, with the likely result that Netanyahu will form the governing coalition.  Despite the overall bleak outlook for Palestinian human rights under Netanyahu, there are some otherwise important observations to be made. 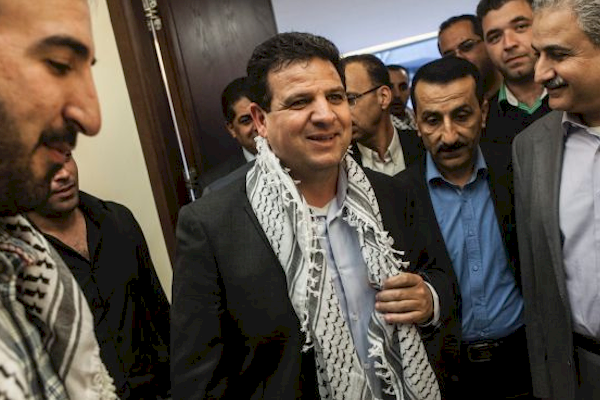 1) Netanyahu won, in part, because he formally ditched the two-state solution:

The day before Israelis went to the polls, Prime Minister Benjamin Netanyahu stated in an interview that there would be no Palestinian state while he was in office. His statement is in stark contradiction to his supposed support of the two-state solution, which he advocated for very publicly in a 2009 speech at Bar Ilan University. [i]

The world diplomatic community has pinned its hopes on the “two-state” solution, so Netanyahu’s flat rejection is a shocking game-changer for everyone.

Before his comments, polls from late last week had Netanyahu’s Likud Party projected to win anywhere between 21 and 23 seats, while the opposing Zionist Union was expected to hold between 24 and 26. [ii] With a final total of 30 seats[iii] for his victorious Likud, Netanyahu’s abandonment of the two-state solution appears to have been a key factor in his party’s win.

It is interesting to note that the rejection of a Palestinian state has been the official Likud platform for years, although this fact was rarely discussed.  It is perhaps a sign of Netanyahu’s pre-election desperation that he so vocally admitted – in front of international community – his opposition to a Palestinian state.

2) Netanyahu now has a decision to make: anger the Israeli right, or anger the international community:

Netanyahu’s remarks may have done wonders when it came to winning over the right-wing vote, but they will likely be unpopular with the international community. If Netanyahu tries to soften his rejection of the two state solution, he will anger right-wing parties in any governing coalition he may form.  On the other hand, if he doesn’t obfuscate his comments about the two-state solution, he is sure to face a strong international backlash.  Merely one day after the election, CJPME observed instances of Likud supporters pursuing the second strategy.  Bottom line: Netanyahu will either have to answer for his remarks in his dealings with Washington, Ottawa and the EU, or face accusations of flip-flopping on a major security issue from voters at home.

Ideally, Western governments will see Netanyahu’s comments as “the last straw” in terms of Netanyahu’s lacklustre pursuit of a settlement with the Palestinians.  Many on the left are hoping that European governments may pressure Israel by formally recognizing Palestine, and taking tougher diplomatic or economic measures, potentially even embracing elements of BDS.

3) Likud’s also owes its win to a racist appeal against the Palestinian citizens of Israel:

Even as election day unfolded, Prime Minister Netanyahu was urging Israeli Jews to get out and vote – not necessarily because of civic duty, but because the Arab vote needed to be countered. In a video posted on his Facebook page, Mr. Netanyahu declared, “The right-wing government is in danger. Arab voters are heading to the polling stations in droves. Left wing NGOs are bringing them in buses.”[iv] It’s no secret that the Israeli far right has consistently appealed to Jewish nationalism as a means of garnering votes. However, Netanyahu’s policies and his behaviour during the campaign have led many to accuse him of “incitement and racism”[v] when it comes to the relationship between Israel’s Jews and its Arab minority.

4) Israeli politicians raised the Knesset’s electoral threshold to keep out Arab parties – but it backfired when the Arab parties formed a joint list:

In 2013, Prime Minister Netanyahu and Foreign Minister Avigdor Lieberman reached an agreement that would raise the Knesset’s electoral threshold from 2% of the vote to 3.25%.[vi] Political opponents and pundits alleged that the move was a cynical attempt to keep Arab parties out of parliament, since many of them had previously been incapable of reaching the 3.25% threshold.

Instead, however, 5 of the Arab parties decided to coalesce under the Joint List, despite their political differences. The result was that the Joint List came in third, winning a total of 14 seats, 2 more than its individual members had held in previous elections.

5) If Likud were to form a coalition government with the Zionist Union, the Arab Joint List would become the official opposition:

In the unlikely event that Netanyahu would seek to form a coalition government with the 2nd place Zionist Union, this would create a very interesting twist. The Arab list’s leader, Ayman Odeh, would become the official leader of the opposition. This would mean Odeh and other opposition leaders would be privy to classified security briefings and information, a development which would have huge political and societal implications both for Israel and for Palestinians in the West Bank and Gaza.  While such a scenario is highly unlikely this time around, it is clearly an ominous possibility for those who see Israel’s Palestinian citizens as a fifth column.

6) The Arab Joint List will have its own internal challenges:

While the Joint List did well in the elections, the real challenge will be finding a common political ground and a consistent voice on an ongoing basis. Though all of its member parties nominally represent Palestinian citizens of Israel, their policies vary widely, including everyone from the Islamic Movement to the communist Hadash, which advocates for gay rights.[viii] The Joint List’s electoral platform centered mostly on providing Arabs with a stronger voice in government. But now that the election is past, the coalition’s ideological diversity will continually pose a challenge to its unity. There are high expectations of party leader, rising star Ayman Odeh, and his ability to create common ground for all the diverse views of his political partners.

7) Most Palestinians are unrepresented in Israel:

The 600,000 Israeli colonists in the West Bank can vote, but sadly, the 2.7 million Palestinians surrounding them cannot.  Israel’s current population stands at around 8.1 million, with 20.7% of its citizens (or 1.67 million) identifying as Arab. Given the 2.7 million Arabs living in the West Bank and the 1.8 living in Gaza, if Palestinians were able to vote in Israeli elections, it would provoke a major shift in the country’s polity. With the “two state solution” off the table with Netanyahu, it is natural to think of one alternative: the “one state solution.”  Under a one-state solution, Palestinians would no doubt aspire to a one-person-one-vote system, but such a vision would be anathema to Israelis who desire Israel to be a state of Jews alone.  Indeed, such is the paradox of Israel’s “Jewish and democratic” dream: If it wishes to be Jewish, it cannot be democratic; and if it wishes to be democratic, it cannot be Jewish.

[i] Rudoren, Jodi. “Netanyahu Says No to Statehood for Palestinians.” The New York Times. March 16, 2015. http://www.nytimes.com/2015/03/17/world/middleeast/benjamin-netanyahu-campaign-settlement.html?_r=1