CJPME Political Blog, December 21, 2016: The Green Party convention this past weekend offered a win for everyone. Sort of. The convention was held to clarify the Greens’ position vis-à-vis economic pressure on Israel for its human rights abuses.  Green leader Elizabeth May was so opposed to an August resolution condemning Israel’s human rights abuses that she had threatened to resign.  Influential party activists sought to preserve their August win while maintaining party unity. 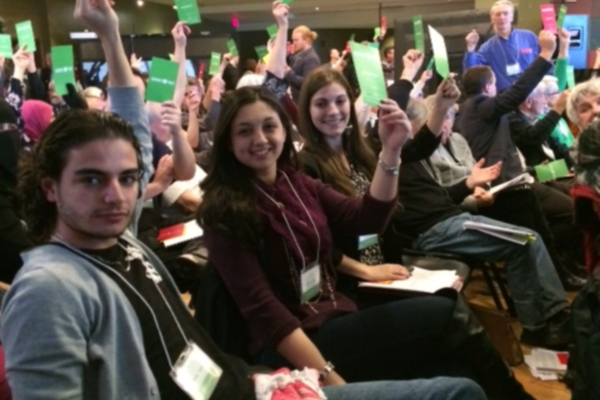 A “compromise” resolution endorsed in advance by both party brass and influential grassroots activists suggested that everyone could have what they wanted. Green leader Elizabeth May got her wish to remove reference to the international “Boycott, Divestment and Sanctions” (BDS) movement, while human rights activists were able to retain strong language censuring Israel’s human rights abuses against Palestinians.

But even though the compromise resolution passed with the support of 84 percent of the members, the message coming out of the convention was anything but clear.

The resolution which passed states that the party “supports […] consumer boycotts, institutional divestment, [and] economic sanctions” in the face of Israeli human rights abuses.  Yet the official statement issued by the party immediately after the vote stated that “[t]he Green Party explicitly rejects the notion of boycotting the state of Israel.”

Anyone confused?  If you’re not clear as to whether Canada’s Greens support a boycott of Israel, you’re in good company. Postmedia news published an article the day of the vote which totally missed the point of the resolution, citing instead the denunciation of boycotts and BDS in the Greens’ official statement.  Not surprisingly, Postmedia decided to run a second story on the convention result the next day.  The second story finally revealed that the revised Green policy maintained support for key facets of BDS.

The CBC, for its part, initially published an article on the convention result suggesting that the Greens had rejected economic sanctions on Israel.  Shortly afterwards, the article was updated to lead with the sentence, “The Green Party voted this weekend in Calgary to continue to call for consumer boycotts, institutional divestment and other sanctions to pressure Israel…”  The mea culpa at the bottom of the revised article reads, “An earlier version of this story had a number of errors that required correction and clarification.”

It’s hard to blame our overworked mainstream media: the Green’s hyperlink to the resolution that passed is buried in the last sentence of their 770 word statement.

So to be clear, pending on-line ratification, the Green Party policy on the Middle East conflict approves of boycotts, divestment and sanctions to pressure Israel to respect international law.  If the on-line ratification fails, the August resolution – which endorses the international BDS movement – will remain in force.  So either way, official Green policy will support boycotts, divestment and sanctions on Israel.

Of course, given the misleading message of the statement, such confusion may be exactly what May and the Green Party leadership wanted from the outset.  Conspicuously, May’s sound bytes coming out of the convention also do nothing to stem the confusion.  In fact, May’s comments on the resolution seem obsessed with BDS and her disdain for it.  She refers to BDS derisively as “a wolf in sheep’s clothing,” and warns, “You don’t understand why it’s so dangerous until you dig in deep.”

Her opponents in the party point out how BDS aligns 100 percent with both official Canadian policy on the Mideast conflict, and international law.  Call it BDS, or call it boycotts, sanctions and institutional divestment, the human rights activists in the party simply want to improve the lot of impoverished Palestinians.  But strangely, in a party which touts itself as a champion of social justice, such realities don’t seem to register with the party leadership.

Late Tuesday, following complaints from influential party members who supported the resolution, the party agreed to modify the wording in the Green statement slightly.  Yet even the updated statement still asserts that the Green Party rejects a boycott of Israel.  And coming two days after the convention ended, the change will hardly qualify as a media scoop.

There was another curious and misleading sentence in the Green Party statement that was also picked up in the mainstream coverage of the convention.  The BDS movement, the Green leadership complained, does not support “the right of the State of Israel to exist.”  Of course, such language mimics that used in negotiations between Israel and the Palestinians, whereby each side imposes “pre-conditions” on the other before negotiations can begin.

But the humble Palestinian grassroots movement that has been debated in Canada’s parliament has no authority to either recognize a state or enter into negotiations.  The movement’s founders simply seek respect for their human rights.  And as a party which claims to emphasize social justice, the Greens should recognize that with human rights, there are no pre-conditions.