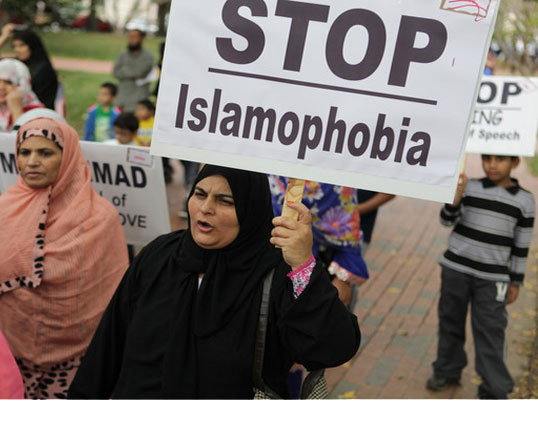 CJPME is pleased to publish the next of a 13 part election series analyzing the positions of Canada’s political parties. CJPME hopes that, by revealing what parties have said and done on key Middle East issues, Canadians will be better informed voters in the upcoming elections. Our next analysis studies each party’s position on Islamophobia in Canada.

Since their election in 2015, the Liberals have issued many symbolic statements in support of Canadian Muslims and against Islamophobia. Nonetheless, the Liberals have repeatedly failed to take steps to truly combat Islamophobia. Because of this, Liberals received a B.  Meanwhile, since the last election, the NDP has worked quite hard to raise the issue of Islamophobia in Canada – receiving a strong grade in our evaluation as a result. While the Greens purportedly oppose hatred and discrimination writ large, they have not prioritized the fight against Islamophobia. Similarly, the Bloc Québécois has also failed to elevate the issue of Islamophobia in Canada and have even expressed support for Quebec Premier François Legault’s Islamophobic Bill 21. Likewise, the Conservatives have sought to deflect much-needed attention away from the problem of Islamophobia, with many CPC MPs continuing to refuse to use the term ‘Islamophobia’ at all.

Islamophobia – an unfounded hostility toward Muslims and individuals who may be perceived as Muslim[1]– is a form of racial discrimination that remains pervasive in Canada.  While Islamophobia has existed in various forms for many years, it has especially increased following 9/11 and with fear of jihadist groups like al-Shabaab and the Islamic State (ISIS). Meanwhile, right wing parties and organizations in Canada have increasingly engaged in identity politics, using Islamophobic and xenophobic rhetoric to mobilize inwardly-focused segments of the electorate. This type of rhetoric only serves to worsen perceived and imagined threats of minority growth.

There are numerous ways in which Islamophobia may be manifested, whether that be through the media’s portrayal of Muslims or through hate crimes. Perhaps the most well-known manifestation of Islamophobia in Canada was the Quebec City mosque attack, which took place on January 29th, 2017. In this case, six Muslims were killed, and many others were injured. Indeed, mosques and Islamic community centres across the country have increasingly become targets of vandalism and hate crimes.[2] Statistics Canada’s recent police-reported hate crimes report revealed that of all targeted groups, Canadian Muslims have experienced the highest increase in hate crimes over the 2016-2017 period.[3] In February 2018, the Standing Committee on Canadian Heritage released the M-103 report, replete with recommendations. One of the recommendations in the report was for the government to develop a national, concrete action plan to tackle Islamophobia in Canada. Additionally, many Canadian Muslims continue to face discrimination from government institutions in terms of access to employment. In June, for example, the Quebec government passed Bill 21, formally banning individuals in the public sector from wearing religious symbols or clothing[4].

The Liberal Party under Justin Trudeau has acknowledged Islamophobia as an important problem and has proven supportive of efforts to tackle it. Trudeau himself has consistently condemned hate crimes against Muslim Canadians. For instance, in 2015, following a rise in incidents of racial abuse and discrimination towards Muslims, Trudeau stated that “these recent acts of intolerance have no place in our country and run absolutely contrary to Canadian values of pluralism and respect.”[5] Liberal MPs also voted in favor of two separate motions condemning Islamophobia in 2016.[6]

While the Liberals’ swift condemnation of Islamophobia is laudable, the Trudeau government has been slow to take substantive, meaningful action on this file. For example, while Liberal MP Frank Baylis sponsored Parliamentary petition E-411 against Islamophobia[7], it was in fact then- NDP leader Thomas Mulcair who introduced the petition in Parliament on October 2016. Only months later did the Trudeau government pass a similar motion – motion M-103 – condemning Islamophobia and all other forms of systemic racism. The following year, the Standing Committee of Canadian Heritage released the M-103 report and its recommendations. The report encouraged the government to develop a national, concrete action plan to tackle the problem of Islamophobia in Canada. It also recommended that the government commemorate January 29th as a National Day of Action and Remembrance on Islamophobia. The Liberals, however, have failed to implement these recommendations—even the symbolic ones, such as the commemoration of January 29th.

Finally, while Trudeau’s rhetoric against Islamophobia should recognized, it must not be forgotten that Trudeau supported the Conservative government’s “anti-terrorism” bill, known as Bill C-51.[8] This intrusive law disproportionally affected Muslims and Middle Eastern people, the main groups accused of terrorism in the West. Despite Trudeau’s promises to make substantial amendments to this bill, he failed to adequately correct portions of the law that disproportionately affect Muslim Canadians.

The Conservative Party has long been unsupportive of efforts to tackle Islamophobia and has even consistently denied the pervasiveness of Islamophobia in Canada. Under Stephen Harper, the Conservatives routinely engaged in dangerous rhetoric that merely served to amplify Islamophobic sentiments. Harper opposed niqabs (a veil that some Muslim women wear over their face) at citizenship ceremonies, even declaring on multiple occasions that the niqab “is rooted in a culture that is anti-women.”[9] He also set up a hotline for individuals to report the “barbaric cultural practices” of their fellow Canadians, which clearly targeted Canadian Muslims and those perceived to be Muslim.[10]

Following a mass shooting at a mosque in New Zealand in 2019, Conservative Leader Andrew Scheer failed to use the word ‘Islamophobia’ in his condemnation of the attack. Scheer was largely criticized for his banal characterization of the situation as an attack on “freedom,” rather than an attack on Muslims. [14]

In April 2019, Conservative MP Scott Reid introduced Motion M-153, which sought to designate January 29 as a “National Day of Solidarity with Victims of Anti-religious Bigotry and Violence.” While his motion appears to honour the victims of the Quebec City mosque attack, it instead fails to address the Islamophobia that motivated the attack in the first place. Rather, the motion dilutes the significance of January 29th by grouping it with several dissimilar violent incidents from Canadian history. Overall, this motion is disappointing as it appears to intentionally detract from the threat of Islamophobia in Canada.

The NDP has remained consistently supportive of efforts to address Islamophobia, and has repeatedly acknowledged the need to tackle Islamophobia through concrete action. Under the leadership of Thomas Mulcair, the NDP presented an anti-Islamophobia motion in the House, and the motion was passed on October 26, 2016. When Conservative MPs prevented unanimous consent on a previous motion condemning all forms of Islamophobia in 2016, Mulcair expressed his dismay, stating: “I can’t see how anybody can speak out against a motion that seeks to condemn a form of hatred.”[15]

The NDP voted in favor of M-103 and even came out in support of CJPME’s campaign to commemorate January 29th as a National Day of Action and Remembrance on Islamophobia. In parallel, the Party's Immigration, Refugees and Citizenship Critic Jenny Kwan has repeatedly pointed to the rise in hate crimes towards Muslims since 2014.[16] For his part, NDP leader Jagmeet Singh has personally condemned Islamophobia on numerous occasions and has been quick to issue statements in the wake of Islamophobic attacks in Canada, such as the arson attack at the Alberta’s Edson Mosque in 2018.

‎Although former Bloc Québécois leader Yves-François Blanchet has condemned Islamophobia on multiple occasions, he has admitted to having reservations about the importance of a “National Day of Remembrance and Action on Islamophobia.” He stated that all hate crimes must be denounced and that it was not rational to highlight hate crimes towards a particular religion. In adopting this rhetoric, the party fails to acknowledge the well-documented rise in hate crimes towards Muslims and thereby minimizes the increasing threat of Islamophobia. Yves-Francois Blanchet further stated that the word Islamophobia is “now loaded with a toxic political weight” given partisan division on the matter He has claimed that a national day against Islamophobia risks sewing more division.[17]

Most significantly, the Bloc Québécois has declared its support for the Quebec government’s discriminatory and Islamophobic Bill 21, which bans teachers, police and other government employees from wearing religious symbols. [18]. The Bill violates the Canadian Charter of Rights and Freedoms, and unfairly persecutes religious minorities, especially Muslim Canadian women wearing a hijab. Blanchet went so far as to write a letter to fellow MPs in which he explained the supposed merits of Bill 21, claiming the bill will protect Quebec’s secular identity.

In January 2018, the Green Party of Canada expressed its support for a National Day of Remembrance and Action on Islamophobia on the anniversary of the Quebec City Mosque massacre.[19]

Green Party Leader Elizabeth May also acknowledged the increasing threat of Islamophobia: “The growth of far-right movements across North America and in other Western countries threatens the safety of anyone deemed – through the colour of their skin, their accent, their attire, or their beliefs – to be unwelcome.”[20]

In general, however, Elizabeth May has not made it a point to prioritize condemnations of Islamophobic hate crimes occurring throughout Canada. For example, May voted for the Conservative amendment to M-103, which sought to dilute the motion by removing the term "Islamophobia."  In this way, though Elizabeth May clearly opposes religious discrimination, she has been hesitant to dedicate attention to combatting the specific challenge of Islamophobia in Canada.[21]

[9] Stephen Chase. “Niqabs rooted in a culture that is anti-women: Harper says.” The Globe and Mail. March 10, 2015. https://www.theglobeandmail.com/news/politics/niqabs-rooted-in-a-culture-that-is-anti-women-harper-says/article23395242/.