As the Harper era ended and Trudeau’s term began in late 2015, a collective sigh of relief could be heard from ethnic communities all across Canada, especially from Muslim Canadians. From opposing niqabs at citizenship ceremonies to setting up a hotline for individuals to report the “barbaric cultural practices” of their fellow Canadians - which would have undoubtedly targeted Muslims and those believed to be Muslim - Steven Harper’s Conservative government proved to be highly intolerant of certain minority communities and certainly aided in the heightening of tensions against ethnic and religious groups in the country. 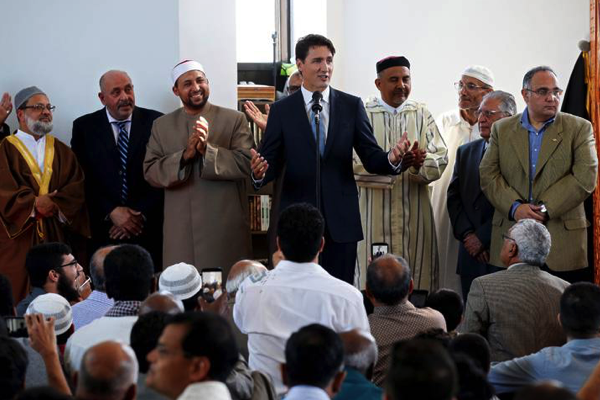 It is no surprise, then, that Trudeau’s comparatively progressive stances and charismatic personality have been so enthusiastically embraced by Muslim Canadians. As a Muslim Canadian myself, I have witnessed the raw enthusiasm within the community over our new Prime Minister. I can’t tell you the number of times my Muslim friends have posted selfies with our “dreamy” Prime Minister on social media. Many others have either proudly shared posts of the PM doing some pretty quirky things, like practicing yoga moves on a desk or showing off his Bhangra dancing skills.

A year has gone since Trudeau fist came into office, offering a welcome message of change throughout his campaign. Yet, although Trudeau has had some accomplishments in office so far, Muslim Canadians must remain skeptical of his government and must be prepared to hold him accountable on issues that directly or indirectly impact our community. If we make the mistake of idolizing him, we risk granting him the freedom to disregard our interests. And many of his actions do indeed deserve to be critiqued.

On the question of Islamophobia, for example, many Muslims like me were initially encouraged when Trudeau publicly condemned hate crimes against Muslim Canadians. Following the surge in incidents of racial abuse towards Muslims after the Paris attacks in late 2015, Trudeau stated,  “These recent acts of intolerance have no place in our country and run absolutely contrary to Canadian values of pluralism and respect.”

However, the Trudeau government has been slow to take meaningful actions that live up to our PM’s words. It is true that Liberal MP Frank Baylis sponsored a Parliamentary petition against Islamophobia, which garnered almost 70,000 signatures – more than any other Canadian petition on this issue. However, it was NDP leader Thomas Mulcair who introduced the motion in Parliament on October 6. Given that it was a Liberal MP – Baylis – who sponsored the petition, it is quite puzzling and rather disappointing that it was not Trudeau who introduced the motion at the House of Commons.

“Progress” on Islamophobia by Trudeau at the Federal level has been far outpaced by measures, albeit mostly symbolic, taken by provincial parties. For instance, an NDP private members’s bill was recently unanimously passed by the Ontario legislature, making October Islamic Heritage Month in that province.  Furthermore, a resolution condemning all forms of Islamophobia was initiated by the Liberal Party in Ontario and was later passed successfully just this past summer. Yet, the Liberal Party has failed to raise a similar motion at the federal level. Trudeau’s federal Liberal Party has thus proven to be slow to act on issues of Islamophobia. As Muslim Canadians, what we need from Trudeau is substantive action, not just encouraging words.

The Trudeau government’s relationship with Saudi Arabia should also give pause to Canadian Muslims. The Liberal government continues to carry on a “business as usual” attitude with Saudi Arabia despite horrific human rights abuses. In addition, with its $15 billion arms deal with the Saudis, the Trudeau government enabling violence against Muslims abroad must not be overlooked, either. Liberal Foreign Affairs Minister Stephane Dion’s signature gave the contract the final approval necessary for it to be finally implemented.

Unsurprisingly, Saudi Arabia has a history of using Western-provided arms in attacks against Muslims in the region. In one poignant example, fragments of American-manufactured bombs were recently discovered at the horrific scene of a Yemeni funeral that was targeted in Saudi Arabia’s latest bombing campaign.

Instead of fawning over Trudeau’s “Eid Mubarak” video messages, Muslim Canadians should be outraged by our government’s nonchalant dealings with a country that has so little respect for human rights. Given the Middle East origins of many Canadian Muslims, we understand the ruthlessness with which such arms may one day be used against the broader Muslim community.

Finally, we cannot forget that Trudeau supported the Conservative government’s intrusive “anti-terrorism” bill, known as Bill C-51, despite public protests. Let’s face it: this law mostly targets Muslims and Middle Eastern people – the main groups accused of terrorism in the West. Despite Trudeau’s promises to make substantial amendments to this bill, he has yet to do so. While the PM may have many other pressing issues, we must keep a close eye on this bill that disproportionally affects the Muslim community.

I’m not suggesting that Trudeau has failed the Muslim Canadian community. He has shown great openness when it comes to reaching out to communities formerly marginalized by Harper’s government. However, as Muslim Canadians, we must be wary to hold our Prime Minister accountable, or risk being taken for granted by Canada’s federal Liberals.