CJPME Factsheet 16, published October, 2006: This Factsheet provides basic information about cluster bombs and their use in Lebanon in 2006--their effect on civilians and their legality. 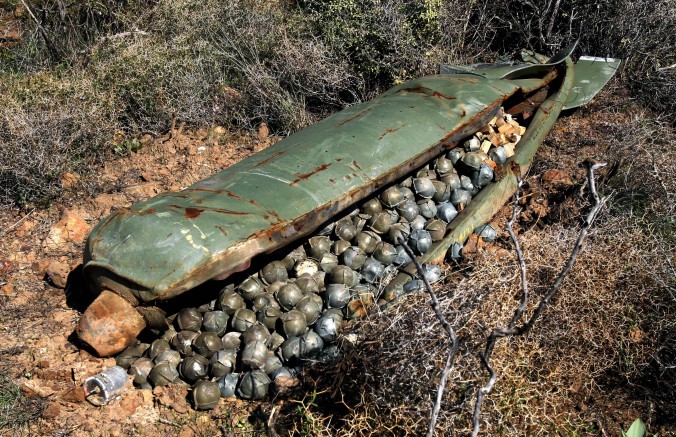 Factsheet Series No. 16, created: October 2006, Canadians for Justice and Peace in the Middle East
View factsheet in PDF format

What are Cluster Bombs?

How are Cluster Bombs a Threat to Civilians - During Attacks and After Attacks?

How Many Cluster Bombs were used by Israeli Forces in Lebanon?

The Israeli army fired some 1,800 cluster rockets containing over 1.2 million cluster bomblets.  “We covered entire villages with cluster bombs, what we did there was crazy and monstrous," an Israeli army commander told the Israeli newspaper Haaretz, which reported that in order to compensate for the rockets' imprecision, the order was to "flood" the area with them. The IDF also used cluster shells fired by 155 mm artillery cannons, so the number of cluster bombs fired on Lebanon is even higher.[2]

To date, a total of 592 cluster bomb sites have been identified and 40,000 cluster bomblets have been cleared.  “It is possible that we are looking for as many as one million unexploded cluster bomb sub-munitions” according to Christopher Clark, Programme Manager of the UN Mine Action Coordination Centre – South Lebanon (MACC-SL). Clearance of most of the unexploded ordnance (UXOs) and cluster sub-munitions will take between 12 to 15 months.

UNIFIL is still waiting for the Israel Defense Forces to hand over the coordinates and maps needed to identify cluster bomb strike locations.[3] This would make clearance efforts easier and faster.

When were the Cluster Bombs Used by the Israeli Army?

"The outrageous fact is that nearly all of these munitions were fired in the last three to four days of the war," said David Shearer, the United Nations humanitarian coordinator in Lebanon on September 19th, 2006. "Outrageous because by that stage the conflict had been largely resolved in the form of (U.N. Security Council) Resolution 1701," he said. "We know these munitions have a failure rate and it seems to me extraordinary that they were fired off in the last hours of the war into areas where civilian populations were known to be going.”[4]

What is the Impact of Cluster Bombs on Lebanese Civilians?

Fourteen people have been killed and 90 injured from all types of unexploded ordnance in Lebanon from August 14th until September 19th.  Of these totals, children (6 years to 18 years of age) accounted for two of the fatalities and 32 of the injuries. All the fatalities and most of the injuries resulted from cluster munitions. Some 200,000 people remain displaced due to the level of destruction and contamination by cluster sub-munitions and other UXO in their hometowns. [5] Cluster bomblets have prevented farmers from getting out to their fields and resuming their farming activities, affecting 70 percent of household incomes. They have also turned up in the rubble of destroyed buildings, complicating reconstruction efforts.4

Is the Use of Cluster Bombs Illegal?

Unfortunately, there is no ban on cluster bombs at this time. However, “the use of cluster bombs in the heart of where people live clearly violates the prohibition on indiscriminate attacks and is therefore a grave violation of international humanitarian law," according to Amnesty International.

Moreover, because of their high failure rate (as much as 50% in Lebanon), cluster munitions leave large numbers of hazardous, explosive duds that injure and kill civilians even after the attack is over. Human Rights Watch believes that cluster munitions should never be used, even away from civilians, unless their dud rate is less than 1 percent.[6]

Amnesty International has called for a comprehensive, independent and impartial inquiry to be conducted by the UN into violations of international humanitarian law by both sides in the conflict. The inquiry should examine in particular the impact of the conflict on the civilian populations, and should be undertaken with a view to holding individuals responsible for crimes under international law and ensuring that full reparation is provided to the victims.