CJPME Factsheet 27, published May, 2007: At the conclusion of the Arab League summit in Riyadh at the end of March, 2007, Arab nations reaffirmed and relaunched their blueprint for peace with Israel.  Under Saudi Arabia’s leadership, the proposal (unchanged from the original 2002 Beirut Plan) directly addresses all the “final status” issues between Israel and Palestine, and has the backing of 21 of the 22 members of the Arab League.

Factsheet Series No. 27, created: May 2007, Canadians for Justice and Peace in the Middle East
View factsheet in PDF format 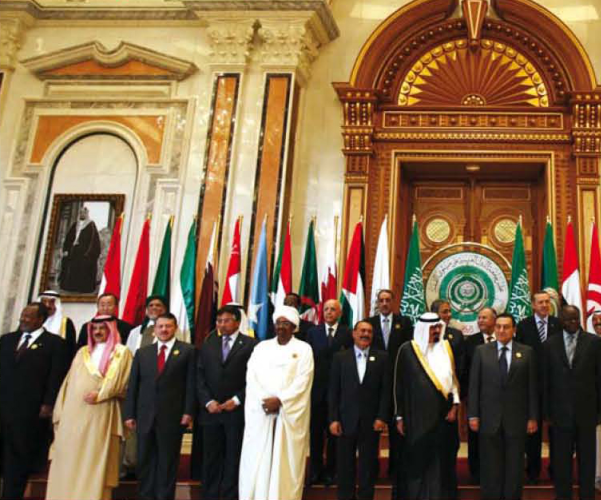 At the conclusion of the Arab League summit in Riyadh at the end of March, 2007, Arab nations reaffirmed and relaunched their blueprint for peace with Israel.  Under Saudi Arabia’s leadership, the proposal (unchanged from the original 2002 Beirut Plan) directly addresses all the “final status” issues between Israel and Palestine, and has the backing of 21 of the 22 members of the Arab League.

What are the terms and parameters of the Saudi Peace Plan?

At its essence, the Saudi Plan calls for Israel to withdraw from all the territories occupied since 1967, including the West Bank, Gaza, East Jerusalem and the Syrian Golan, and to agree to a just solution to the Palestinian refugee situation based on UNGA Resolution 194.  It also calls for the establishment of a Palestinian state within the 1967 borders, with East Jerusalem as its capital.  If Israel respects these parameters, the Arab League promises to “consider the Arab-Israeli conflict ended,” and enter into “normal relations” with Israel in a regional peace providing security for all states.

The Saudi Plan’s comprehensive offer of “normal relations” and regional peace is unique… and highly significant.  The normal relations would begin once Israel has finalized agreements with the Palestinians, Syria and Lebanon.  Based on the principle of “land for peace,” the Plan lays out clear targets for final status issues: refugees, Jerusalem, security, and borders.  Arab League representatives have presented the Plan as an ingoing framework for negotiations, not as a starting point subject to Israeli pre-conditions for negotiations.  Concerning the negotiations, Saudi Foreign Minister Saud al-Faisal affirms that “What the Palestinians accept, we accept.”  In other words, the Plan is meant as a starting framework for negotiations, with the Arab League respecting the outcomes agreed by the negotiating partners.[1]

What are the Strategic Elements at play with the Plan?

With its historical relationships with the US and the Palestinians, Saudi Arabia is well positioned to push the plan.  Through the winter and spring, Saudi officials strongly promoted their strategy for peace with the US, gaining a certain openness to the framework prior to the Riyadh meeting.[2]  Subsequently, Palestinian president Mahmoud Abbas voted in support of the agreement, unopposed by Unity partner Hamas with what some call its “policy of ambiguity” with regards to the Plan.[3]

Nevertheless, bigger issues are at play for many of the players involved.  Many Middle East nations seek greater Arab unity with the emergence of Iran as a regional power.  The Saudi efforts to help the Palestinians forge a Unity government, combined with the Arab League’s support for the Saudi Plan are two important steps along this path.  Pessimism with the US’s ability to bring stability to Iraq has also led Arab countries to more ardently seek peace between Israel-Palestine and within Iraq itself.  Fear that Iran would “fill the gap” with a meltdown in Iraq, Saudi Arabia and others are exploring alternatives to restore regional stability.  To this effect, the Saudis entered into unusually intense diplomatic efforts with Iran itself over the winter, mostly to help calm tensions in Lebanon.

It is also important to point out that both the US and Israeli governments are much weaker now than they were just a year ago.  Struggling under intense criticism for military missteps and domestic scandals, either government could leverage the peace process as a welcome distraction to ongoing internal crises.

How has Israel responded to the Plan?

The Saudi Plan puts the Israelis in a difficult situation.  While normalization of relations with its Arab neighbours is something it has long desired, the implications of the Plan – wholly aligned with international law – regarding Palestinian refugees and borders represent significant obstacles in Israel’s internal political realm.  Israel must also avoid appearing to reject the offer out of hand in order not to lose the public relations battle.  Thus, regardless of its presumed intents, the Israeli response has been both engaging and noncommittal.  Israeli PM Ehud Olmert and other Israeli government officials suggested that the plan had “interesting elements,” [4] but also concluded that the Plan needed amending before it could be accepted as a framework for negotiations. [5]  Likely an evasive manoeuvre, Olmert has also suggested that he should meet with Arab leaders to “clarify” points of the Plan.  Arab leaders, however, perceive this as an attempt to obtain normalization of relations before finalizing a suitable peace with the Palestinians. [6]

Few will argue that the key issues on the Plan for the Israelis are 1) the resolution of the issue of Palestinian refugees, and 2) the issue of borders.  (Again, the Saudi Plan is aligned with international law on each of these issues: CJPME factsheets “The Palestine Refugee Situation” and “The ‘Right of Return’ for Palestinians” summarize the legal rights of Palestinian refugees.  CJPME factsheet “Resolution 242: Interpretation and Implications” speaks to the legal status of the 1967 borders.)  Olmert himself has articulated an extreme hard-line position with respect to any Israeli responsibility for the Palestinian refugee situation.[7]  Nevertheless, both the Arab League, and the Palestinians (at Camp David II and following) expressed considerable flexibility in resolution of the refugee situation.  With respect to borders, Olmert was elected in 2006 on a platform of “unilateralism” – an approach where the powerful party dictates a solution to the weaker party.  Again, however, the Palestinians have shown flexibility in land swap deals considered in previous peace negotiations.  Ultimately, the Israelis seem most comfortable with the status quo, which keeps them in the driver’s seat as the more powerful player.  Israel’s consistent response to the talks is that bi-lateral Israeli-Palestinian negotiations are the only ones they will pursue for the moment. [8]

How have the US, the UN and other international players responded?

Leading up the Riyadh meeting, UN Secretary General Ban Ki-moon expressed strong support for the Saudi Plan, describing it as a “pillar” in the search for Middle East peace.[9]

As for the US, the response has been more mixed.  From a positive perspective, in early April US State Department spokesperson Sean McCormack stated that, “The State Department… welcomed the Arab League’s reaffirmation of [the Plan]…  That is something we view as very positive.” [10]  He also added that the US didn’t see any need to revise the terms of the Plan, “We are not and have not asked them to amend it…”  In late March, it appeared that US Secretary of State Condoleezza Rice was trying to develop some momentum for talks between Israel, the Palestinians and the Arab League.  Several visits later, however, her shuttle diplomacy resulted only in bi-weekly discussions between Olmert and Abbas.  As a consequence, the Plan does not seem to have developed much real traction with the Bush administration, and its interest seems to have waned since Condoleezza Rice’s initial reaction.

Ultimately, the resulting US approach does not seem to align with the original Saudi intent.  Whereas the Bush Administration seems to favour staged negotiated settlements with tough choices deferred, the Saudis – and the Arab League – are dissatisfied with approaches that perpetuate a non-productive status quo between the Israelis and Palestinians.  As an example, Condoleezza Rice has recently put forth the idea of a “political horizon” for Palestinianspromising eventual Palestinian statehood, but a number of her core ideas in this were non-starters for Palestinians.  As one Saudi media analyst put it, the Saudis have told the Americans that it’s their “process that kills the peace.” [11]  The European Union, for its part, has been very supportive of the Saudi Plan, but has also been cautious in its optimism.