CJPME Factsheet 65, published October, 2009: This factsheet looks at the potential crimes committed by Israel during its massive three-week assault on the Gaza Strip beginning December 27th, 2008. The 22 day assault killed over 1400 civilians, many of them women and children; destroyed hospitals, mosques, and schools; killed livestock; destroyed large tracts of agricultural land; and battered an economy already decimated by Israel’s blockade.

Factsheet Series No. 065, created: October 2009, Canadians for Justice and Peace in the Middle East
View factsheet in PDF format 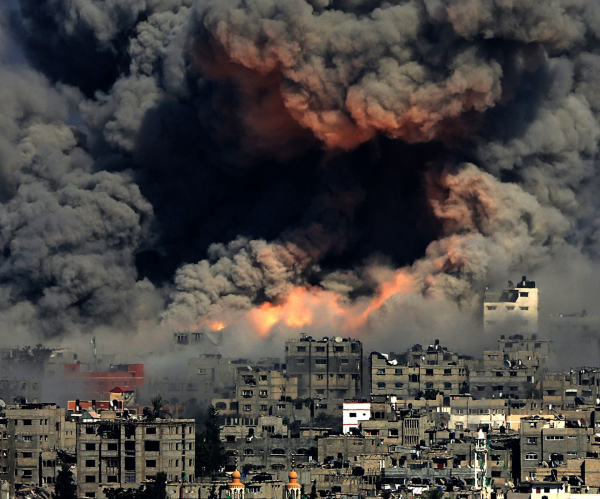 On December 27, 2008 Israel launched a massive military assault on the Gaza Strip.  The assault took place in two phases: a week-long, round the clock aerial bombardment followed by a full-scale ground invasion.   Dubbed “Operation Cast Lead” by the Israeli military, the 22 day action killed upwards of 1400 civilians, many of them women and children; destroyed hospitals, mosques, and schools; killed livestock; destroyed large tracts of agricultural land; and battered an economy already decimated by an Israeli blockade. [i]  “Cast Lead” was allegedly launched in response to rocket fire from Gaza directed at Israeli towns.  As reported by human rights organizations[ii] in its aftermath, the material realities of the assault point to a different reality than the one put forward by Israel – that of collective punishment.

What constitutes a war crime or crime against humanity?

War crimes are those actions that violate key articles in the laws of war as set out in a number of international treaties and conventions.  Chief among these documents are the 1949 Geneva Conventions and subsequent Geneva Protocols Relative to the Protection of Civilian Persons in Time of War.  Other laws pertinent to the Gaza case are the 1980 UN Protocol on Prohibitions or Restrictions on the Use of Incendiary Weapons and the Rome Statute of the International Criminal Court.  As a whole, these instruments of international law address questions of the proportionality of force, the protection of civilians and civilian infrastructure, prohibitions against the wanton destruction of land and property, access to humanitarian aid, the proper use of weapons, and the potential referral to international prosecution for those crimes not investigated by the offending parties.

The Rome Statute defines a crime against humanity as a: “widespread or systematic attack directed against any civilian population, with knowledge of the attack;” and can also include murder, torture, deportations or forcible transfer of populations, group-based persecution, or “other inhumane acts of a similar character intentionally causing great suffering, or serious injury to body or to mental or physical health.”[iii]

What are the allegations against Israel and who is making them?

Independent international human rights groups like Human Rights Watch and Amnesty International, and Israeli human rights groups like B’Tselem and Breaking the Silence have all released detailed reports based on field research and witness testimony.[iv]  While these collectively paint a shocking picture of the actions in Gaza, they have been politically superseded by the “Goldstone Report” issued by the UN Fact Finding Mission on the Gaza Conflict.  Headed by Judge Richard Goldstone, formerly of the South African Constitutional Court, and prosecutor for both the special tribunals for Rwanda and the former Yugoslavia, the Mission spent six weeks in Gaza in the aftermath of the conflict.

What evidence is there for the allegations against Israel?

The Goldstone report is based on witness testimony, medical evidence, video and photographic archives, satellite imagery, forensic analysis of weapons remnants and damage, and public hearings – all of which point to a very low potential for fabrication of results and a high threshold for proof and allegations.

Wilful attacks on civilian infrastructure: The Goldstone report determined that Israel had premeditatively targeted mosques, schools, and hospitals as first targets during the assault.  It also found that Israel wilfully targeted food production and distribution centres, killed livestock, and destroyed agricultural land.  Goldstone reported that Israel had targeted sewage plants, creating ecological and health hazards for which there is no means of cleanup in Gaza.  The report also found that Israel had wilfully attacked UN facilities, going so far as to fire high-powered mortar shells into the al-Fakhura junction next to which 1300 civilians were sheltering in an UNRWA school, and attacked a police headquarters killing an entire graduating class.  The report also determined that Israel had repeatedly violated the prohibition against attacks on civilian hospitals, going so far as to attack the ambulance depot of the Al Quds Hospital in Gaza city with white phosphorous.

Attacks on civilians: The Goldstone report indicated that Israeli planes, tanks, helicopters and artillery targeted densely populated areas throughout the assault.  Furthermore, the Report found Israeli soldiers who testified to the Israeli use of human shields during the assault; the targeting of civilian residences for attack in which it was known civilians were sheltering.  In the words of an Israeli soldier, “the soldiers were made to understand that their [i.e. the soldiers’] lives were the most important, and that there was no way our soldiers would get killed for the sake of leaving civilians the benefit of the doubt."[vi]  As the Goldstone report states, Israel is guilty of “continuous and systematic abuse, outrages on personal dignity, humiliating and degrading treatment contrary to fundamental principles of international humanitarian law and human rights law,” concluding that “the treatment of these civilians constitutes the infliction of a collective penalty... and amounts to measures of intimidation and terror... grave breaches of the Geneva Conventions and [constituting] a war crime.”[vii]  1400 Palestinian non-combatants died, compared to 9 Israeli soldiers, 4 of whom were killed by ‘friendly fire’.

Obstruction of humanitarian aid: Throughout the conflict Israel engaged in the wilful, premeditated obstruction of humanitarian aid, killed aid workers, and opened fire on ambulances.  It is important to note that under the Fourth Geneva Convention, the dictate to permit humanitarian aid to individuals in affected areas applies 24-hours-a-day.  i.e. There is no provision to allow a belligerent party to restrict aid to certain “windows.”   Not only did Israel violate this dictate, but it even violated the terms of its own widely publicized “humanitarian windows” during which time goods were allowed into Gaza for a few hours.  In one example, on Thursday, January 8th Israeli tanks fired on a clearly marked UN aid convoy which was proceeding through an Israeli military checkpoint, destroying a truck full of goods and killing the driver.  One particularly heinous episode occurred on January 7th, when Israeli ground troops prevented an ICRC rescue team from entering a street in the Zeitoun area of Gaza city where it was reported survivors were sheltering.  When the team finally ignored the troops, they found 4 dehydrated and starving children lying among the corpses of their dead adult relatives.  The Israeli soldiers were found later to have known about the situation.

How must Canada address the findings of the human rights reports?

Canada is bound as a signatory of the Geneva Conventions and as a member of the international community to pursue allegations of war crimes.  Quite substantially, Canada signed the Rome Statute of the International Criminal Court in 1998 and was the first country in the world to ratify it into domestic law in the form of the Crimes Against Humanity and War Crimes Act (2000).  The legislation is commendable, as it asserts that no one, whether a private citizen, state official, or member of a state military can expect to find safe haven from prosecution for war crimes or crimes against humanity.  Canada is bound to its commitments in this regard by first referring the case to the Security Council.

As of the writing of this document, this referral has not take place.  At the time of Israel’s assault, the Canadian Government refused to condemn Israeli actions, arguing instead that Israel’s “Operation Cast Lead” was a legitimate instance of self-defence. [viii]


[i] For details and references, please see CJPME factsheets “Israel’s War on Gaza” (Jan., 2009) and “Humanitarian Crisis in Gaza following Israeli assault” (Feb, 2009)  Both documents are available at http://www.cjpme.org/ItemCollectionPage.aspx?ICID=4

[v] The primary finding of the human rights organizations on this point related to the illegal Israeli use of White Phosphorus in Gaza.

[vii] Human Rights in Palestine and Other Occupied Arab Territories: Report of the UN Fact Finding Mission on the Gaza Conflict, p. 20.

[viii] For more information on Israel’s right to self defence, please see www.cjpme.org for the factsheet: Israel's right to self-defence under International Law.