CJPME Factsheet 66, published November, 2009: This factsheet provides an overview of a report by human rights organization Amnesty International (AI) entitled Israel/Gaza: Operation ‘Cast Lead’: 22 days of death and destruction. The report accuses the Israeli army of having killed hundreds of unarmed Palestinian civilians, and of having destroyed thousands of homes in Gaza in attacks which seriously infringed on the provisions of international humanitarian law.

Factsheet Series No. 066, created: November 2009, Canadians for Justice and Peace in the Middle East
View factsheet in PDF format 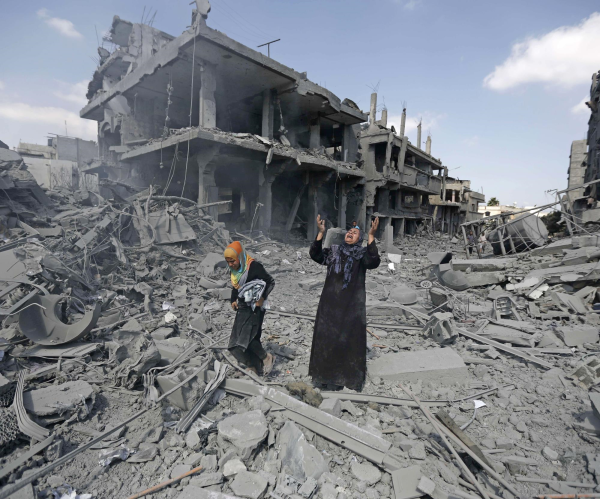 On July 2, 2009, human rights organization Amnesty International (AI) released an report entitled Israel/Gaza: Operation 'Cast Lead': 22 days of death and destruction. The report accuses the Israeli army of having killed hundreds of unarmed Palestinian civilians, and of having destroyed thousands of homes in Gaza in attacks which seriously infringed on the provisions of international humanitarian law. Amnesty also accused, although to a lesser extent, Hamas and other Palestinian groups of having engaged in acts amounting to war crimes. The AI demanded thorough, independent and impartial investigations on the conduct of all parties involved in the conflict.

What is Amnesty International and how does it work?

Created in 1961 by Briton Peter Benenson, AI is a global movement whose members advocate for human rights. The organization has some 2.3 million members and supporters in over 150 countries and territories.[i] It is independent of any government, political ideology, economic interest or religion. Its mission is to conduct research and take action to prevent and end grave abuses of humanitarian, civil, political, social, cultural and economic rights, as stated in the Universal Declaration of Human Rights.

Amnesty's work relies on careful research of facts and on standards adopted by the international community. Amnesty obtains its information from various sources: fact-finding missions in the field and meetings with government officials, testimonies of prisoners or relatives of victims often collected through interviews, reports from journalists or other humanitarian organizations.[ii] [iii]

What are the major accusations levelled against Israel by Amnesty?

The report on the Israeli operation "Cast Lead" is based on evidence collected by AI delegates, including a military expert, during field research conducted in January and February 2009. The report exposes Israel's use of weapons designed for battlefield against a civilian population trapped in Gaza, with no chance to escape the violence.

Attacks causing the death of hundreds of Palestinian civilians. AI notes that the scale and intensity of the attacks against Gaza from Israel during the 22 day-conflict have caused more death and destruction than any other Israeli offensive in the past. According to AI’s figures, some 1400 Palestinians were killed by Israeli forces, while at least 900 of these were unarmed civilians not involved in the conflict, including 300 children and 115 women.[iv] The organization also reports that the Israeli attacks that were the deadliest were carried out with high precision weapons. Israeli F-16 combat aircrafts targeted and destroyed hundreds of Palestinian homes without warning, with full knowledge of the circumstances, killing and injuring people, often while they were sleeping at night. Other victims were sitting in their yard or hanging laundry on their roof. Some children were struck while playing in their room, on the roof of their home or outside near their home. Rescuers and paramedics have been attacked several times while trying to rescue the wounded or recover the bodies of victims. [v] Dozens of civilians have also been killed by less precise weapons, including mortar shells and white phosphorous. Still others, including women and children, were shot at short range while posing no threat to the lives of Israeli soldiers.[vi]

On the basis of evidence collected during its field research and information drawn from several sources, including those made available by the Israeli authorities, AI concludes that hundreds of Palestinian civilians have died as a result of practices which seriously violated international humanitarian law on the part of Israel. “The deaths of so many children and other civilians cannot be dismissed simply as 'collateral damage', as argued by Israel,” said Donatella Rovera, who led the research mission to Gaza. “Many questions remain to be answered about these attacks and about the fact that the strikes continued unabated despite the rising civilian death toll.” [vii] AI accuses Israel of failing in its duty to take all feasible precautions in the choice of its means and methods of attack to avoid loss and damage to the civilian population. It also accuses Israel of carrying out disproportionate and indiscriminate attacks, having directly taken the civilians and civilian objects as targets, including medical personnel and vehicles.[viii]

Attacks on refuges and obstruction of humanitarian aid. In its report, Amnesty describes how more than 1.5 million Gazans were taken hostage during the operation “Cast Lead”, unable either to leave the territory - the borders were completely sealed - or find safe haven. The Israeli attacks were carried out so that the Palestinians do not feel safe anywhere - whether in private homes or within the United Nations buildings. [ix] Amnesty has found no evidence that Palestinian militants had used human shields, as claimed by Israel, but it nevertheless found evidence that Israeli had forced Palestinian civilians, including children, to serve as human shields for the Israeli army. [x] The situation was exacerbated by the lack of humanitarian aid arriving in the Gaza Strip during the Israeli offensive because of the longstanding blockade imposed by Israel. The Israeli army also impeded access to medical care by preventing ambulances and medical personnel from treating the wounded and transporting them to the hospital. Given the scope of these practices, AI concluded that it can only be a form of “collective punishment” imposed on the entire population of Gaza, in open violation of Israel's obligations under the Geneva Conventions.[xi]

Deliberate destruction of the Gaza Strip. Amnesty’s investigation shows that besides having destroyed more than 3 000 homes and damaged about 20 000 others, Israeli strikes have destroyed hundreds of public, commercial and industrial buildings, devastated farms and pastures, ruined entire neighborhoods of Gaza, exacerbating an already dire economic situation.[xii] Contrary to the fundamental provisions of international law, AI notes that much of the destruction caused by Israel was seemingly deliberate and the result of wide-ranging attacks against civilian infrastructure that could not be justified by “military/security necessity” or indiscriminate attacks which failed to distinguish between military targets and civilians. Again, these actions were “seemingly tolerated or even directly sanctioned up the chain of command, and [...], at times appeared intended to collectively punish local residents for the actions of armed groups”. [xiii] All these practices are explicitly condemned by international law, including deliberate and disproportionate attacks against civilian targets, imposition of collective punishment and destruction of property not required by military necessity. AI's report notes that the definitions provided by the Israeli army of “legitimate targets” and “proportionality” are not consistent with the requirements of international law. [xiv]

What are the major accusations leveled against Hamas by Amnesty?

Amnesty’s report also accused Hamas of war crimes due to the hundreds of rockets attacks launched into civilian areas of southern Israel which killed 3 Israeli civilians. In addition to the locally made Qassam rockets, Palestinian militants fired several longer-range Grad missiles, smuggled into Gaza from Egypt through tunnels. These missiles, which reached farther into Israeli territory, put more civilians in danger.[xv] Although less lethal than the Israeli attacks, these strikes “using unguided rockets which cannot be directed at specific targets, violated international humanitarian law and cannot be justified under any circumstance,” said Donatella Rovera. [xvi] AI also blames Hamas and other armed Palestinian groups for endangering Palestinian civilians by firing rocket attacks from residential areas and storing weapons in them. [xvii]

[iii]  For more information on how international human rights organizations conduct their field research and assess “what happened” during a conflict, please see CJPME Factsheet No. 68, “The authority of human rights reports on the Middle East”, November 2009.