CJPME Factsheet 67, published January, 2010: This factsheet looks at the use of new weapons in illicit ways during the Israeli military operation in the Gaza Strip codenamed “Cast Lead,” including white phosphorous, drones, flechettes, and tungsten bombs, as well as other lethal weapons.

Illegal Use of Weapons by Israeli during Gaza Assault

Factsheet Series No. 067, created: January 2010, Canadians for Justice and Peace in the Middle East
View factsheet in PDF format 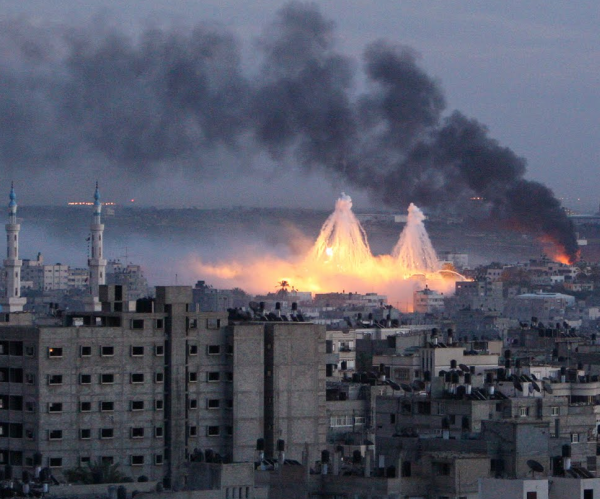 In 22 days following December 27, 2008, the Israeli military killed over 1 400 Palestinians including over 300 children in the Gaza Strip[1] in an operation it dubbed “Cast Lead.”  Even with its conventional weaponry, Israel was accused of war crimes related to the destruction that was “wanton and resulted from direct attacks on civilian objects as well as indiscriminate attacks that failed to distinguish between legitimate military targets and civilian objects.”[2]  Yet Israel also experimented with different and new weapons in illicit ways during Cast Lead.

What new weapons were misused by Israel during “Cast Lead”?

White Phosphorous.  Designed to be an obscurant or incendiary/defoliant for battlefield troops, white phosphorous was used repeatedly by Israel in urban areas in central Gaza. It is delivered by shells containing wedges impregnated with an incendiary that ignites on contact with oxygen and sends out jellyfish-like plumes of suffocating smoke. Amnesty International found remnants of shell casings and smoldering wedges in residential areas on January 18.[3] The Times of London released photographs of an Israeli Defense Force (IDF) artillery shells bearing the label M825A1- U.S. manufacturer General Dynamic’s code for white phosphorous.[4] In addition to telltale photos of white phosphorous detonations from the assault, Human Rights Watch also provided eye-witness reports of shelling.[5]

Depending on wind conditions and height of detonation, wedges can scatter over an area the size of a football field, burning wood and similar building materials, even melting glass. Phosphorous burns until its oxygen source runs out.[6] It eats through flesh and into bone seeping into internal organs, causing extreme pain, long term kidney failure and spread of infection.[7]

Israel’s use of air-bursting white phosphorous shells in Gaza was illegal from a number of perspectives.  First, because of the broad dispersal of munitions, use of white phosphorous in urban areas is illegal as it fails to distinguish both between combatants and civilians, and between military and civilian targets.  Secondly, use of an incendiary as a weapon – even against combatants – is restricted under customary international law, as it causes unnecessary suffering. [8]

Drones.  Armed drones or Unmanned Combat Aerial Vehicles (UCAVs), may be operated by a pilot in safety many kilometers from a combat zone. Able to remain aloft for up to 24 hours, drones as well as their payloads may be equipped with infrared sensors and high-resolution cameras. The pilot can observe and respond to situations as if in the cockpit of the aircraft or watch through the nose of a missile as it makes its way to a target; he should be able to tell the difference between combatants and civilians.[9]  IDF used two Israeli drones in Gaza: the Hermes and the Heron

Human Rights Watch (HRW) did a report on six IDF drone attacks which killed a total of 29 civilians between them. [10] In one, a drone-launched missile detonated just outside UNWRAGazaTechnicalCollege on December 27 killing 12 men and women waiting for a bus. Two days later another drone struck a flat-bed truck parked outside a metal shop, killing nine people, including two children.

Similar to dozens of other cases where Israel violated international humanitarian law, these drone attacks failed to verify that the targets were combatants.  But as noted by HRW, “The technological capabilities of drones and drone-launched missiles make the violations even more egregious.” [11]

Flechettes.  Usually fired from tanks, flechettes are 4 cm long darts, 5- 8 000 of which are packed into shells and scatter in area approximately 100m x 300m. Flechettes were deployed by Israeli forces in densely-populated areas. On January 4, Amnesty International reported one paramedic killed and another suffering serious injuries after their ambulance was struck by flechettes near Beit Lahiya. A sixteen-year-old boy died of injuries from a flechette when his family home was shelled. A young mother died after she was hit along with her husband, brother-in-law and 2-year old son in the courtyard of their home.[12]

Similar to the issues of using white phosphorous, Israel’s use of flechettes in Gaza was illegal from a number of perspectives.  Because of the extremely broad dispersal of the flechettes, use of flechette shells in urban areas is illegal as it fails to distinguish between combatants and civilians.  Clearly, as demonstrated in the examples above, the shells were also improperly and illegally directed at civilians and medical personnel.

Tungsten Bombs.  Dense Inert Metal Explosive (DIME ) munitions were thought to have been the cause of injuries  previously not encountered in Gaza Hospitals. Dr. Erike Fosse of the Norwegian Aid Committee reported lower body injuries suggesting victims “[…] had stepped on a mine, but there was no shrapnel in their wounds,” he said.[13] Many victims died within 24 hours.[14] While Human Rights Watch did not find evidence of DIMEs, there was evidence of drone-fired missiles with fragmentation sleeves made of tungsten. These contained many tiny fragments each about 2-3mm3, which explode at a high rate and like DIMEs decelerate quickly due to their relatively heavy weight.[15] They can shred anyone in a blast area of about 20 metres in diameter.  For the same reasons as flechettes, use of tungsten bombs in urban areas is proscribed under international humanitarian law.

Other Weapons.  The report of the UN inquiry headed by Richard Goldstone made brief reference to depleted uranium allegedly used by IDF forces during their assault on Gaza as well non-depleted uranium and niobium. While Commission did not rule out the possibility that these materials might have been used it did not investigate further.[16]

A new GPS guided mortar missed its target by 30 metres and hit a UNWRA school, immediately killing 30 people as well as others who later died of their injures. Developed by the Israeli weapons industry and Aliant, an American firm, the mortar was claimed to have a 3-metre margin of error.[17]

How Does International Law apply in times of armed conflict?

Civilians must not be subject to acts or threats of violence meant to spread terror among them and are protected from indiscriminate attacks. Military forces must restrict their attacks to “objects” or property that has a specific military purpose. Houses, places of worship, crops, water treatment plants and other installations providing for the sustenance of non-combatants may not be harmed for the sake of a military objective.[18]As well, combatants must take every precaution possible to “[…] verify that objectives to be attacked are neither civilians nor civilian objects and not subject to special protection[…]” avoid and minimize loss of life, injury and damage to the extent of avoiding an attack if these outcomes are likely.[19]