CJPME Factsheet 77, published April, 2010: This factsheet looks into the so-called Canadian Parliamentary Coalition to Combat Antisemitism (CPCCA), a temporary body created by a number of pro-Israel organizations in Canada.  The CPCCA’s mandate was defined in a manner which predisposed it to conclude that there has been a dramatic increase in anti-Semitism in Canada and that political action against Israel contributes to anti-Semitism. This factsheet examines the methods and conclusions of this controversial body.

Factsheet Series No. 077, created: April 2010, Canadians for Justice and Peace in the Middle East
View factsheet in PDF format 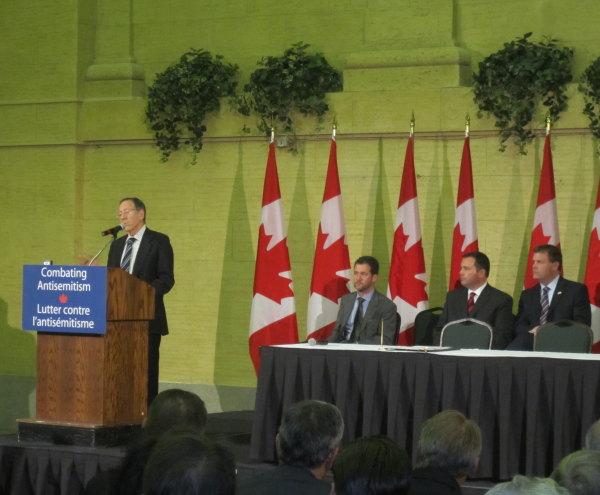 What is the CPCCA and what is its mandate?

The Canadian Parliamentary Coalition to Combat Antisemitism (CPCCA) was formed in March 2009[i] after 11 Canadian MPs participated in the inaugural conference of the Inter-parliamentary Committee for Combating Antisemitism (ICCA), held in London, England, in February 2009. The ICCA issued a London Declaration stating: “We note the dramatic increase in recorded antisemitic hate crimes and attacks targeting Jewish persons and property, and Jewish religious, educational and communal institutions… We are alarmed at the resurrection of the old language of prejudice and its modern manifestations in rhetoric and political action – against Jews, Jewish belief and practice and the State of Israel.” The ICCA declared that member “Parliamentarians shall expose, challenge, and isolate political actors who engage in hate against Jews and target the State of Israel as a Jewish collectivity.”[ii]

According to the CPCCA’s own website, it formed as a response to ICCA. Therefore, from the outset, the CPCCA’s mandate was defined in a manner which predisposed it to assume that there is in fact a dramatic increase in anti-Semitism in Canada and that political action against Israel contributes to anti-Semitism.

The CPCCA is an ad-hoc committee, rather than a formal standing committee of the Canadian Parliament. This means the following:

What were the premises of the CPCCA, and were they well-grounded?

The CPCCA publicly asserts that, “recorded incidents of antisemitism have been on the rise internationally. Furthermore, the problem is now being manifested in ways never experienced before […] new fears have arisen especially for those who support the State of Israel. For example, on some university campuses, Jewish students are being threatened and intimidated to the point that they are not able to express pro-Israel sentiments freely, or are even fearful to wear a Jewish skull cap or Jewish star of David around their necks.”[iii]

However, it is not clear that there is a “dramatic increase” in anti-Semitism[iv] in Canada. According to Statistics Canada, recorded hate crimes against Jews in fact dropped between 2006 and 2007: “There were 185 religiously-motivated incidents in 2007, down from 220 in 2006. There were fewer incidents targeting people of both Jewish and Muslim faiths.”[v] The same report says that two-thirds of all reported hate crimes motivated by the religion of the victim are committed against Jews, therefore approximately 122 incidents of hate crimes against Jews occurred in 2007. So, although many Jewish Canadians – perhaps all – have been victims of occasional stereotyping or slurs, few have actually been the victims of hate crimes, let alone violent ones.

As documented by Professor Morton Weinfeld of McGill University’s Department of Sociology, in Multiculturalism Canada’s Encyclopedia of Canada's Peoples, Jewish Canadians now surpass non-Jewish Canadians in all the standard measures of economic and social integration and well-being: they are better educated, are more likely to be engaged in professional and managerial work, and enjoy higher incomes than average Canadians.[vi]

Thus, both Prof. Weinfeld’s findings and Statistics Canada’s findings contradict a key founding assertion of the CPCCA.  Only if one accepts the CPCCA’s assertion that strong criticism of Israel in public spaces is anti-Semitism could one conclude that there is a rising tide of anti-Semitism in Canada.  And should one accept the CPCCA’s logic – that strong criticism of Israeli policies can be equated with anti-Semitism – it would reinforce an erroneous and prejudicial notion that all Jews are somehow responsible for the actions of the Israeli government.

How objective was the CPCCA’s data gathering?

The CPCCA took written submissions on anti-Semitism for several months until August, 2009, and then selected certain groups to testify verbally to the Coalition between November, 2009 and February, 2010.  At a minimum, all submitting individuals and organizations received letters of acknowledgement for their submissions, with promises that all submissions would be considered in the CPCCA’s final report.

Such promises notwithstanding, the process of selecting witnesses for oral testimony seems to have favoured those individuals and organizations who would bolster the CPCCA’s founding premises.  Of the approximately 60 witnesses called for oral testimony, only 5-6 could have been presumed to question the CPCCA’s assertions about criticism of Israel being tantamount to anti-Semitism (e.g. Canadian Union of Postal Workers, etc.)  It is also known that many organizations who wrote submissions questioning the CPCCA’s founding premises were not called as witnesses (e.g. Independent Jewish Voices, etc.) [vii]  While no committee is obliged to invite all witnesses to testify, the criteria by which witnesses were chosen should be published to enable the public to judge the objectivity of the proceedings.

Parliamentary groups inquiring into allegations of an intensifying social problem normally draw on statistics generated by a neutral body, such as Statistics Canada, and on peer-reviewed academic studies, to complement the anecdotal evidence offered by invited witnesses. This has not been the case with the CPCCA.  And curiously, while the CPCCA did not see fit to invite certain vocal Canadian groups, the CPCCA felt it appropriate to invite US-based groups.  Two different members of the American Jewish Committee were granted hearings before the CPCCA, as well as academics from two different American universities.[viii] It is not clear why they would be considered experts on anti-Semitism in Canada.

What political wrangling has taken place within the CPCCA?

Since its establishment, rumours of partisan wrangling have plagued the Coalition. [ix]  Publicly, the two Bloc Quebecois members of the CPCCA withdrew from the Coalition in March, 2010. Bloc whip Michel Guimond, confirmed that the party’s decision reflected its unease in the face of “the inequality of opinions presented before the Coalition,” and “the refusal of the Steering Committee to hear groups with opposing viewpoints.”  Citing one example of this resistance to opposing viewpoints, the Bloc Quebecois members had specifically asked that Canadians for Justice and Peace in the Middle East (CJPME) and the Canadian Arab Federation (CAF) be invited for oral testimony before the CPCCA.  Both of these requests were denied. [x]  Luc Desnoyers, one of the two Bloc members formerly presiding on the Coalition Steering Committee also confirmed that other parties and Coalition members had made requests for the calling of witnesses, which had similarly been blocked.

[iv] The American Heritage Dictionary of the English Language, Fourth Edition (2009) defines anti-Semitism as “1. Hostility toward or prejudice against Jews or Judaism.  2. Discrimination against Jews.”

[ix] Readers may note that the CPCCA has operated during a period of political wrangling between Liberals and Conservatives over which party is a more ardent supporter of Israel.  E.g. See “Tory pamphlets courting Jewish voters anger Grits,” CBC News, Nov. 20, 2009