Factsheet Series No. 081, created: June 2010, Canadians for Justice and Peace in the Middle East
View factsheet in PDF format 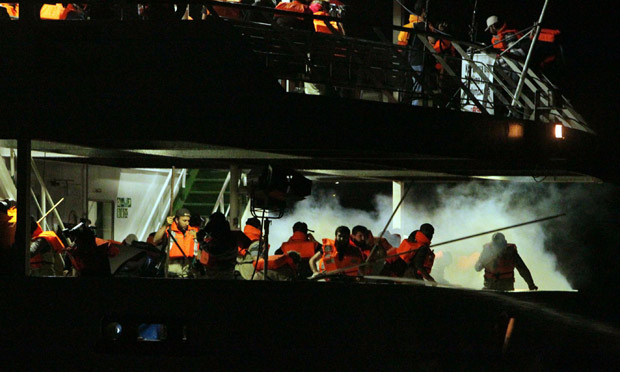 What was the Gaza Freedom Flotilla?

The Gaza Freedom Flotilla was a convoy comprised of six ships[1] loaded with 10,000 tons of humanitarian aid intended for Palestinians in Gaza. The aid consisted mainly of medical supplies, construction materials (like bags of cement), school supplies, toys, electric wheelchairs, and prefabricated houses. All of these goods were denied entry to Gaza because of Israel’s blockade, which has been enforced ever since Hamas seized power in June 2007.

682 people coming from 42 different countries were on board the convoy,[2] three of which were Canadian (Kevin Neish, Rifat Audeh and Farooq Burney). Among the passengers were intellectuals, journalists, European and Arab members of parliament, religious representatives and international NGO members. Hedy Epstein, Shoah survivor and also member of the International Solidarity Movement, Mairead Corrigan Maguire, Nobel Peace Prize winner 1976, Henning Mankell, author of Swedish detective novels and Hilarion Capucci, former Greek Catholic archbishop of Jerusalem were also on board.

Who were the flotilla organizers and what were their objectives?

The convoy was organized by the Freedom Flotilla Coalition, which is comprised of the Free Gaza Movement, the European Campaign to End the Siege of Gaza (ECESG), Turkish NGO Insani Yardim Vakfi (IHH), the Perdana Global Peace Organization, Greek and Swedish NGO Ship to Gaza, and The International Committee to Lift the Siege on Gaza.[3] According to the Free Gaza Movement, the main purpose of the voyage was to break the illegal Israeli siege of Gaza by sending humanitarian aid by sea. In doing so, they were also looking to awaken international conscience on the Israeli blockade: “We want to push the international community to review its sanctions policy and to put an end to the continuous Israeli occupation.”[4] The Gaza Freedom Flotilla was the 9th trip organized by this group.[5]

How did Israel attack the Humanitarian Boat Convoy?

Israel’s attack against the Humanitarian Boat Convoy occurred on Monday, May 31st 2010 at around 4:30 a.m. in the international waters of the Mediterranean Sea around 70 nautical miles off the coast of Gaza. Around thirty Israeli Zodiac boats each carrying a dozen heavily armed soldiers circled the flotilla and opened fire at the Turkish ship, the Mavi Marmara. At the same time, three helicopters flew overhead while commandos descended on ropes and shot at the deck.[6] Aboard the Mavi Marmara, journalist for Al Jazeera English Jamal Elshayyal announced that he had, without a doubt, seen “real bullets fired before any Israeli soldier had reached the bridge,” and confirmed that these shots had indeed caused the death of two people.[7]

According to Kevin Neish, one of the Canadians on board of the Mavi Marmara, Israeli commandos started to shoot teargas, sound grenades and rubber coated steel bullets before finally switching to real ones. Having descended successfully on deck despite passenger resistance, two Israeli commandos were taken prisoners by activists, disarmed and brought to the infirmary. The violent attack nevertheless continued for half an hour despite raised white flags and frantic calls for a ceasefire. With the resistance subdued, the Israeli soldiers took control, demanded that everyone head to the passenger deck, and had the captain announce that the ship was no longer heading for Gaza.[8]

Eight Turks and one American of Turkish origin were killed by the Israeli commandos during the raid, which left around fifty civilians wounded, many of them severely so.

Rifat Audeh, another Canadian aboard the Mavi Marmara, briefly describes the imprisonment conditions on the ship following the Israeli raid: ‘Some of us were beaten, all of us were handcuffed, nobody was allowed to go the bathroom nor was anyone allowed to move or sleep, and we were barely given anything to eat.’[9] Haneen Zoubi, a Palestinian deputy at the Knesset who also took part of the flotilla, confirmed that the soldiers refused to provide the necessary medical care to the injured activists despite her persistent demands.  This resulted in the avoidable death of some.[10] All of the activists’ communication equipment, cameras and memory cards were confiscated by the Israeli soldiers. All material is still in the possession of the Israeli government, which has reportedly kept this material to distribute at its own discretion.[11] In its report, the IHH describes Israel’s violations as: the obstruction and breach of all communication; illegal questioning and arrest of passengers, confiscation of passports, the seizure of ships, humanitarian aid and personal items, physical and psychological torture, maltreatment and physical abuse.[12]

After waiting for many hours, passengers were finally brought to the port of Ashdod (Israel), and then to the prison of Beershiva. Neish says that the prison conditions were primitive and inhumane, including the lack of food, sleep deprivation and violence during questioning. Neish recalls that Turkish and Arab activists were the most poorly treated.[13]Israel, under strong international pressure, eventually managed to speed up the process of passenger deportation. Most foreign governments called to the immediate release of their nationals.

How did the international community react?

The Israeli commandos’ bloody attack sparked an outcry across the world and provoked an unprecedented wave of protests against the Gaza blockade (enforced by Israel since 2007). United Nations Secretary Ban     Ki-Moon declared that he was “shocked” by the Israeli attack and demanded a full enquiry on the events. In parallel, the 15 members of the Security Council condemned the Israeli interception of the humanitarian convoy, requested the opening of a prompt, impartial, clear and credible inquiry corresponding to international norms, and called Israel to lift the Gaza blockade.[14]

European States also condemned the Israeli raid, describing it as: “totally disproportionate”, “serious and disquieting” (Spain), and “an absolutely inacceptable response” to a humanitarian mission (Ireland and Great-Britain). Germany, Belgium, France and Portugal deemed the assault “disproportionate” and Italy “deplored” the “killing of civilians.” Moscow deemed that the assault constituted “a gross violation of international rights,” while Peking declared its “shock.” President of Palestinian Authority Mahmoud Abbas described the operation as a “massacre” and has asked Washington to quickly intervene to put an end to “Israeli crimes.”[15]

The most alarming outcome for Israel was to see its strategic relationship with Turkey (the two States are linked by military cooperation accords since 1996) greatly strained by the attack against the Mavi Marmara, and the death of nine Turkish nationals. The relationship between Tel Aviv and Ankara, already shaken by the 2009 Assault on Gaza, may have undergone an irreversible change. Turkish Prime Minister Recep Erdogan accused Israel of “inhumane state terrorism,”[16] has since then recalled his country’s ambassador from Tel Aviv, and closed Turkey’s airspace to Israel in retaliation. In addition, Israel rejected calls to issue an official apology (as demanded by Turkey), or to participate in an international inquiry on the raid. Israel also refused to give compensation to the families of victims or to release the three Turkish ships seized during the operation.[17]

How did Canada’s respond to the Israeli attack?

Like the United States, Canada expressed regret about the casualties, but did not outright denounce the raid.[18] Nor at any point did Canada request the quick return of its three nationals. “Canada does not feel it necessary to make a big commotion on this issue,” explained Peter Kent, Minister of State for Foreign Affairs.[19]


[1] At first, the convoy was made of eight ships registered under in different countries and belonged to different organizers. Six of the ships arrived in time for the meeting in Cyprus on May 29, and were subsequently stopped on their way to Gaza at the dawn of May 31st. The seventh ship, (The Rachel Corrie), delayed by mechanical problems, was eventually stopped on June 5th, and the eighth ship abandoned the voyage in Cyprus.