CJPME Factsheet 85, published July, 2010: This factsheet looks at the 2010 Iraqi parliamentary election, the country’s third since 2005. This election was expected to serve as an indicator of the level of political stability in the country, particularly in light of the expected US troop withdrawal. Observers have pointed out that despite the focus on electoral politics, the run-up to the March 7 elections highlighted deep-seated problems that threaten the fragile recovery of Iraq, in the form of recurring election-related spates of bombings, ethnic tensions over Kirkuk, the re-emergence of sectarianism, and political manipulation of state institutions. In light of these dramatic events, the 2010 election was considered an important opportunity for national reconciliation among the Iraqi people.

Factsheet Series No. 085, created: July 2010, Canadians for Justice and Peace in the Middle East
View factsheet in PDF format 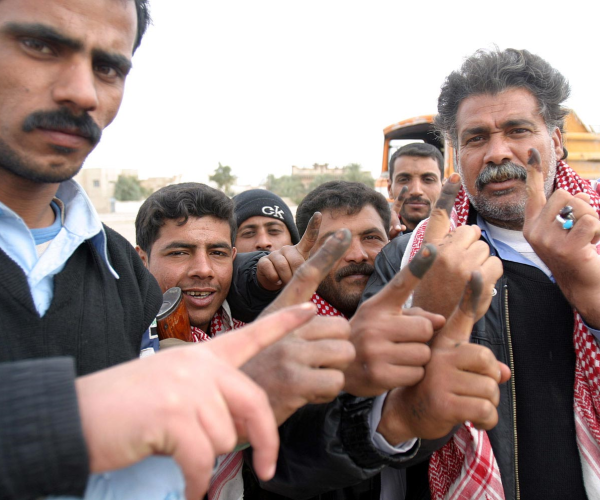 Iraqis went to the polls on March 7, 2010 for the country’s third parliamentary election since 2005. The election was expected to serve as an indicator of the level of political stability in the country, particularly in light of the expected US troop withdrawal (scheduled to complete by the end of 2011.)[i] Observers have pointed out that despite the focus on electoral politics, the run-up to the March 7 elections highlighted deep-seated problems that threaten the fragile recovery of Iraq, in the form of recurring election-related spates of bombings, ethnic tensions over Kirkuk, the re-emergence of sectarianism, and political manipulation of state institutions. Hence, the 2010 election was also considered an important opportunity for national reconciliation among the Iraqi people.[ii]

What were the results of the election?

With a reported 62% turnout, the election results indicated that Iyad Allawi and his Iraqi National Movement list won 91 seats, while Nouri Al-Maliki’s State of Law Coalition came in a close second at 89 seats. The Iraqi National Alliance won 70 seats and the Kurdish alliance managed to obtain 43 seats. The vote counting process was tumultuous. On April 19th, Iraq’s election commission ordered a manual recount of the vote in Baghdad, due to Al-Maliki’s complaints that the electronic vote counting system was flawed. [iii] However, a subsequent recount of votes in Baghdad revealed no evidence of fraud, and the Iraq Supreme Court ratified the elections results on June 1st.[iv]

Since no party was able to gain the required majority to form a government – a party would need 163 seats for an outright win - a protracted negotiation process has since taken place over Iraq’s new government. As of July 2010, the parties hadn’t been able to reach an agreement, but it was suggested that they might by the beginning of the month of Ramadan, in August. Meanwhile, Al-Maliki’s government is continuing to carry on its duties, since in recent Iraqi practice, the old government stays in power until replaced by a new one.

Who were the major players in this election?

State of Law Coalition: Led by the incumbent Prime Minister Nouri Al-Maliki, the coalition claims to cut across ethnic and religious divides. The groups within it include Al-Maliki’s Dawa party as well as Shia Kurds, Sunni tribal leaders, Christians and independents. The coalition has attempted to cast Al-Maliki as a secularist leader who represents all of Iraq, despite his roots with the Dawa, a Shia Islamist party.[v] Initial efforts to have all major Shia parties, including Dawa, Muqtada Sadr’s movement and Islamic Supreme Council of Iraq (ISCI), unite under one banner as they had in the 2005 elections failed after Al-Maliki decided he could win without the help of his former allies. With the increasing strength of the Dawa party over the last few years, Al-Maliki has been accused by his political rivals of trying to consolidate his power and overshadowing his allies.[vi]

Iraqi National Movement (INM): Former Prime Minister Iyad Allawi heads this coalition, which also includes Vice-President Tariq Al-Hashemi and Saleh Al-Mutlaq head of the Iraqi Front for National Dialogue. The coalition includes smaller Sunni parties as well as Shia leaders, and has attempted to bill itself as more able to cross sectarian lines than its rivals. Allawi is known to have been a CIA asset during Saddam Hussein’s reign and has strong ties with Arab regimes such as Saudi Arabia and Western governments including the US and Britain.[vii]

Kurdistan Alliance: This group is dominated by the two Kurdish parties, the Kurdish Democratic Party and the Patriotic Union, that administer Iraq’s semi-autonomous Kurdish region. Unlike other parties, the Kurdish group has shown no interest in joining non-sectarian alliances.[ix]

What are the issues at stake for the formation of a coalition government?

It’s still unclear when the months-long negotiation over Iraq’s new government will end. The central issue in the formation of a coalition government remains the choice of prime minister. Observers blamed the delay on the entrenched confessionalism in Iraqi politics, which remains a powerful force despite the avowedly cross-sectarian nature of the two major coalitions in the March election.

Al-Maliki’s State of Law coalition and the INA, both consisting of Shia groups, would be considered natural allies. However, the Sadrists, who have emerged with 39 seats and form the leading group within the INA, are deeply at odds with Al-Maliki, who cracked down on the paramilitary wing of the Sadrists, the Mahdi Army, in 2008.[x] In early April, the Sadrist bloc conducted an unofficial referendum to assess which candidate its constituency wanted to support for the position of prime minister. The vote resulted in Ibrahim Jaafari being selected.[xi] Although the results of the referendum were not legally binding, they did provide the Sadrists with a bargaining chip in their negotiations with Al-Maliki.

Allawi’s party, on the other hand, received much of the Sunni vote, making it difficult for them to enter into a coalition with the Shia parties. Both Al-Maliki’s list and the INA are unlikely to ally themselves with the secularist ex-Baathists in Allawi’s party. Furthermore, the Sunni Arabs who are the backbone of Allawi’s party have strong differences with the Kurds over the status of the province of Kirkuk, thus making an alliance with Kurdish parties untenable.[xii] The June 2010 announcement by the INA and the State of Law that they will be forming a union which put their combined tally at 159 seats, 4 seats short of the 163 required for a majority, has been vigorously denounced by Allawi as a collusion to exclude the INM from the government – since the largest bloc in Parliament is the one to set forth a nominee for the post of prime minister.[xiii]

How might the new Iraqi government fit into Washington’s plans for Iraq?

Despite the continuing political uncertainty, the Obama administration says it is still committed to withdrawing all “combat troops” from Iraq by September 2010, and to withdraw (almost) completely by the end of 2011. The installation of a stable, cooperative government in Iraq is therefore crucial. The US is wary of Iranian influence in Iraq, particularly at a time when tensions with Iran are running high. Washington would welcome the coming of Allawi as prime minister, since this would probably result in a government that is more Arab nationalist and less inclined towards Iran. An Allawi government would also tend to have comfortable ties with traditional American allies such as Saudi Arabia and Egypt.[xiv] However, the recent alliance of the State of Law and INA parties has altered the scenario, giving Iran an opening for a foothold in Iraq and putting the US in an uncomfortable position. The withdrawal of the US could leave open a vacuum that Iran, as well as other neighbouring countries like Saudi Arabia and Syria, could try to exploit.

How has this election affected the political dynamics in the region?

There is no doubt that external actors have played a role in the formation of electoral platforms and influenced electors. Senior political figures – including Allawi, prime minister Nouri al-Maliki, and others – have spent the last few months travelling throughout the region, discussing their next government with officials in Iran, Saudi Arabia, Egypt, Jordan, and other countries. Iran has historically been involved in Iraq, having long supported Iraq’s Shia leaders and groups. Back in March, representatives from Al-Maliki’s party and the Sadr movement met in Tehran in order to discuss the prospects of forming a coalition. This Iranian backed attempt to form a strong coalition of Shia parties seems to have paid off, providing Iran with an avenue to exercise more leverage in Iraq. However, Shia parties in Iraq have vowed to keep their distance from Iran and are edging away from its sphere of influence.[xv]

The inability of theUS to counterIran’s influence has caused other Arab states such asBahrain,Kuwait andSaudi Arabia (primarily Sunni), to try and make inroads. The reality of Shia groups being in control ofIraq, with Iranian support, added to its newly acquired democratic culture, is one thatSaudi Arabia seems wary of.Iraq is rich in oil and may well overtake the Saudis in oil production. It has also entered into a number of bilateral agreements with its Arab neighbors such asJordan andEgypt, which have opened embassies inBaghdad. As a response to this potential change in the regional balance of power, the Saudi stance has been changing.Saudi Arabia’s King Abdullah has been meeting with senior Iraqi politicians, including Sadrists and Kurdish officials. It had been known that the Saudis would also prefer Allawi in power as opposed to a coalition of the Shia parties.

[i]  On Nov. 16th, 2008, the Iraqi cabinet approved a Status of Force Agreement (SOFA) between Iraq and the United States which set a date for a complete US withdrawal by the end of 2011. On Feb. 27th, 2009, President Obama unveiled an 18-month plan to end combat operations and troop withdrawal in Iraq, and stated that the 50,000 troops remaining in Iraq by September 1st, 2010 are expected to provide support, training and advice to counter terrorism. The Obama administration has so far stuck to its timeline, and as of May 2010, there were roughly 94,000 US troops in Iraq. See CJPME Factsheet, “American Forces in Iraq – the Road Ahead,” May, 2009; BBC News, “Obama outlines Iraq pullout plan,” Feb. 27th; and Washington Post, “Despite political uncertainties in Iraq, U.S. sticking with drawdown plan,” May 14th, 2010.