CJPME Factsheet 87, published June, 2010: This factsheet looks at the illegality of the Israeli blockade of Gaza. While the Israeli government argues its blockade of Gaza is legal, the opposite is true under the laws of war. To date, several neutral international organizations have condemned the blockade on grounds that it amounts to collective punishment and in clear violation of Israel's obligations under international humanitarian law. This factsheet also provides an overview of the several alternatives (other than a blockade) that can address Israel’s security concerns.

The illegality of the Gaza blockade

Factsheet Series No. 087, created: June 2010, Canadians for Justice and Peace in the Middle East
View factsheet in PDF format 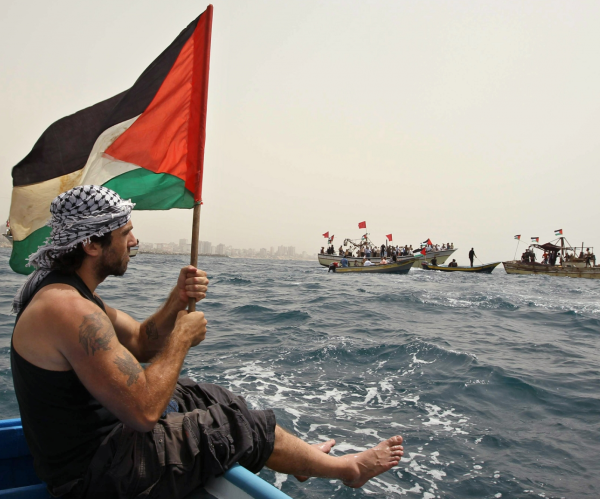 On May 31, 2010, Israeli forces raided an international flotilla bound for Gaza, killing nine passengers aboard the Mavi Marmara, a flotilla ship registered in Turkey. The flotilla intended to deliver humanitarian aid and construction materials to Gaza and to challenge Israel’s blockade of Gaza — in effect since 2007. The attack provoked widespread condemnation from the international community, and controversy within Israel itself. The Israeli government argues its blockade of Gaza is legal, that it had the right to board the ships to enforce its blockade, and that it had a right to respond with lethal force to the resistance it encountered. Central to any consideration of these claims is the question of whether the blockade itself is legal.

Is the Israeli blockade of Gaza legal?

Israel’s blockade is illegal, because it does not respect the laws of war.[i]  A blockade is a military tactic: one that applies during times of war and occupation.  As such, a blockade per se is not explicitly illegal.  As a military tactic, however, it must adhere to the laws of war, e.g. the Fourth Geneva Convention.  The Fourth Geneva Convention specifies, among other things, that belligerents cannot restrict foodstuffs, medicines and other aid (Art. 23, 38, 55); cannot obstruct medical evacuations (Art. 17); cannot prevent civilians from leaving the war zone (Art. 35); and cannot prevent civilians from pursuing their livelihoods (Art. 39, 52.)  Because the Israeli blockade violates all of these precepts, it is illegal.

Blockades, as a military tactic, should be used to prevent the rearmament or reinforcement of the military adversary.  As shown above, blockades cannot be used simply to starve or punish an entire population.  International accords define mechanisms by which a blockading power may prevent the rearmament or reinforcement of the adversary, while still permitting the passage of civilian and dual-use supplies.[ii]  Because of the arbitrary nature of Israel’s blockade from 2007-2010 (e.g. the obstruction of toys, notebooks, chocolate, etc.), many international bodies have concluded that Israel’s blockade is intended to punish the people of Gaza.[iii] Thus again, Israel’s blockade is unlawful, as the Fourth Geneva Convention, Art. 33, outlaws collective punishment.

What do neutral international organizations say about the blockade?

On June 14, 2010, the International Committee of the Red Cross (ICRC) issued a statement on the Israeli blockade of Gaza, saying: “[…] The closure imposed on the Gaza Strip is about to enter its fourth year, choking off any real possibility of economic development. Gazans continue to suffer from unemployment, poverty and warfare, while the quality of Gaza's health care system has reached an all-time low. [...] The whole of Gaza's civilian population is being punished for acts for which they bear no responsibility. The closure therefore constitutes a collective punishment imposed in clear violation of Israel's obligations under international humanitarian law.” [iv]

Amnesty International (AI), for its part has come to the same conclusion.  In its July 2009 report on Israel’s War on Gaza, AI stated the following about the blockade: “The scope of the blockade [of Gaza] and statements made by Israeli officials about its purpose have led Amnesty International to conclude that it is being imposed as a form of collective punishment of the entire population of Gaza, a flagrant violation of Israel’s obligations under the Fourth Geneva Convention. In addition to violating the right to freedom of movement, Israel’s blockade has also resulted in denial of the right to an adequate standard of living, including adequate food and housing, the right to work, and the right to health.” [v]

Is the blockade so bad; does it really constitute “collective punishment”?

According to the ICRC, prior to the blockade, over 4000 different kinds of goods were allowed into Gaza. As of June 13, 80 kinds of goods were allowed in – twice as many kinds as were allowed in between 2007 and June 13, but still a tiny fraction of the variety of goods Gazans need to be healthy.[vi] According to the Israeli human rights group Gisha, a typical large Israeli supermarket stocks 10,000-15,000 items.[vii] In 2010, only around 2,300 truckloads of goods entered Gaza per month, 25 percent of the pre-closure total.[viii] Manhattan, with a similar population, receives 30,000 truckloads per day.[ix]

Although the Israeli government has maintained that its blockade is necessary for security reasons, the prohibition of items as innocuous as coriander, fresh meat, fishing gear, goats, notebooks and toys clearly suggests that a principal aim of the blockade has been to impose suffering on the 1.6 million Gazans.  Israel has also made no secret of its desire to oust Hamas,[x] and the blockade conveniently advances this strategy as well, both materially and by attempting to undermine popular support in Gaza for Hamas.[xi]

The blockade has affected Gazans’ physical and mental health, causing widespread malnutrition, most notably among infants and pregnant and nursing mothers, destroyed most of Gaza’s small businesses, and provoked soaring unemployment (39 percent).[xii] The prolonged and indiscriminate nature of the blockade and its impact makes it evident that the blockade is in fact a form of collective punishment, and therefore is illegal under the Fourth Geneva Convention.

Can Israel’s security concerns be addressed without such a blockade?

Israel has a right and duty to protect its residents from attacks from without, including from rocket-fire originating in Gaza. Although such rocket-fire generally is rarely lethal,[xiii] it is threatening and no doubt affects Israelis’ sense of security. Given Iranian President Mahmoud Ahmadinejad’s inflammatory statements on the conflict, and the occasional seizure of arms shipments in the Mediterranean,[xiv] Israeli concerns about the possible entry of weapons into Gaza are understandable. However, these concerns do not justify an indiscriminate prohibition on purely civilian goods or dual-purpose goods, such as the construction materials so urgently needed to repair the damage inflicted by Israel’s 22-day assault on Gaza initiated December 27, 2008. Israel’s security needs could be addressed by any of the following measures:

Lifting the prohibition on exports fromGaza and on fishing beyond the 5 km limit would also enable Gazans to earn a living and feed themselves, without presenting any security threat toIsrael whosoever.

[xi] Note that the exercise of violence (e.g. assault and blockade of Gaza) to influence political outcomes (e.g. reduce popular support for Hamas) aligns with the common definition of terrorism.