CJPME Factsheet 90, published July, 2010: This factsheet looks at Turkish-Israeli relations overtime and what the future might hold for them. Turkey has been Israel’s closest ally in the Muslim world since Israel’s creation. Turkey was among one of the first states to recognize Israel in 1949. But tensions between the two escalated after Israel’s 2008-2009 assault on Gaza during which nearly 1,400 Palestinians were killed. Relations reached a new low in May, 2010, after Israel attacked an aid ship bound for Gaza, killing nine people—eight Turks and a U.S. national of Turkish origin.

Factsheet Series No. 090, created: July 2010, Canadians for Justice and Peace in the Middle East
View factsheet in PDF format 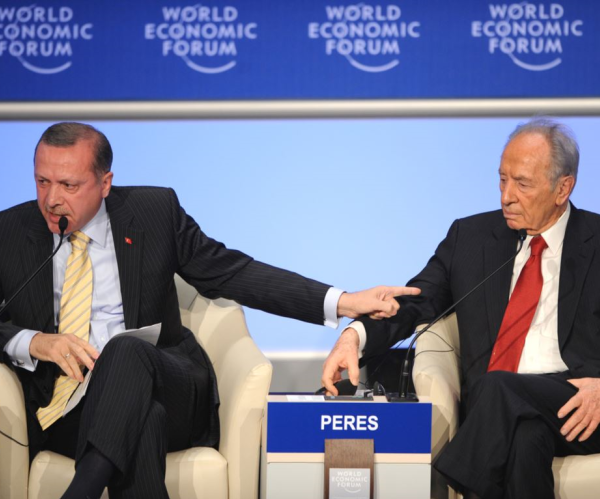 Turkey has been Israel’s closest ally in the Muslim world since Israel’s creation. Turkey was among one of the first states to recognize Israel in 1949. But tensions between the two escalated after Israel’s 2008-2009 assault on Gaza during which nearly 1,400 Palestinians were killed. Relations reached a new low in May, 2010, after Israel attacked an aid ship bound for Gaza, killing nine people—eight Turks and a U.S. national of Turkish origin.

Have Turkish-Israeli relations traditionally been warm?

Yes. Turkey is a Eurasian country that has cultivated relations with both the Western world, represented by Europe to its north, and with the Muslim world which sits south and east. Though Turkey is a predominantly Muslim country, the modern Turkish state was founded as a secular republic after the collapse of the Ottoman Empire in World War I. Because of its geographic location straddling Europe and Asia, Turkey has long been of geo-strategic importance to the West, and has integrated with the West through membership in organizations such as NATO and the Organisation for Economic Co-operation and Development (OECD).

Turkey may have seen an ally in a nascent Israeli state or perhaps it sought to position itself as a mediator between the Jewish and Arab states. As a regional power, Turkey has played a difficult balancing act between pleasing both East and West. This is perhaps best exemplified in its relationship with Israel which has always been strategic rather than ideological in nature (Turkey has boasted in the past that it was Israel’s sole Muslim ally.)  For example, in 1958 Turkey and Israel agreed on a pact which included a partnership in intelligence-sharing and military advancements. In 1967, Turkey joined Arab nations in condemning Israel’s occupation of Arab lands in the Six Day War, but abstained from signing on to a clause referring to Israel as the aggressor.

Historically, Israel and Turkey have cooperated on a number of issues such as terrorism and intelligence-gathering. High-level politicians regularly visited each country, and their respective militaries held joint military exercises and struck billion-dollar arms deals. Israel and Turkey also had strong economic ties with $2.5 billion in trade in 2009.

For decades, Turkey managed to walk the fine line between friend and foe to both Israel and the Arab world. However, the ongoing Arab-Israel conflict made it difficult for Turkey to remain neutral without losing face in the Arab world. Turkey`s current government has also aggressively pursued closer relations with its Muslim neighbours, carving out a bigger role for itself as a regional power.

Why have relations soured?

The main turning point in the Turkey-Israel relationship came when Israel attacked Gaza in 2008-2009. The devastating war left around a 1,400 dead, a large percentage of the coastal strip in ruins, and a humanitarian crisis in its wake. Much of the world was outraged by Israel’s disproportionate and unnecessary use of force.[i] Turkey condemned Israel’s actions, and the Turkish Prime Minister, Recep Tayyip Erdogan, accused Israeli President Shimon Peres of “murdering children on beaches” at a conference in Davos, Switzerland.[ii] On Oct. 9, 2009, Turkey excluded Israel’s air forces from a NATO war-games exercise to be held in the Turkish city of Konya—the first time military relations between the two countries were called into question.

Bitter diplomatic sparring between the two continued and then exploded into a full diplomatic brawl in January, 2010, after Israel’s right-wing Deputy Foreign Minister, Danny Ayalon, summoned Turkey’s ambassador to Israel over a Turkish television show considered offensive by Israel over its portrayal of Israeli Mossad agents. In a bizarre publicity stunt, Ayalon told cameramen in Hebrew to “pay attention that he [Turkey’s ambassador] is sitting in a lower chair... that there is only an Israeli flag on the table and that we are not smiling.”[iii] The footage was aired on Israeli television and then widely rebroadcast in Turkey. Public uproar in Turkey ensued, and the Turkish government demanded, and later received, a public apology from Ayalon.

Relations reached another low after Israel attacked a Turkish civilian aid ship bound for Gaza on May 31, 2010, killing eight Turks and a US national of Turkish origin.[iv] Immediately after the attack, thousands of Turks protested in the streets, Ankara recalled its ambassador from Israel, and it cancelled planned joint military exercises.[v] Four days later, the Turkish President Abdullah Gul said that “Turkish-Israeli ties will never be the same. This incident has left an irreparable and deep scar.”[vi] Ten days after the attack at a Turkey-Arab economic forum in Istanbul, the Turkish prime minister urged Arab nations to step-up efforts to end the Israeli blockade of Gaza, and he repeated calls for an international investigation into the flotilla raid, calling it “banditry in international waters.”[vii]

Yes. Some in the Israeli government allege that Turkey is becoming Islamist in an attempt to explain deteriorating relations. But since its foundation as a republic Turkey has always been a secular state. State secularism became a hot topic in Turkey (and to observers abroad) after the election of Abdullah Gül as Turkey’s president in 2007.  Gül’s election to president was considered somewhat controversial because of his previous involvement in Islamist parties. Nevertheless, Turkish politics remain solidly secular: even recent efforts to ease the headscarf ban in universities were blocked by the Constitutional Court, ruling that a vote by parliament to ease the ban violated the constitution’s secular principles.[viii]

It is not clear how Turkish-Israeli relations will evolve in the future. While the previous warmth between the two nations may be a thing of the past, strong defence ties may prevent a complete breakdown of the relationship. At the same time, hardliners within the Israeli government appear to be spoiling for a fight with Turkey,[ix] which would leave Israel more isolated in the region.

Some analysts contend that Israel needs Turkey more than Turkey needs Israel.[x] TheUnited States has strong strategic relations withTurkey, which it is likely to maintain despite growing differences between Tel Aviv andIstanbul. Turkey is also asserting a foreign policy independent of its strong ties toWashington, as it carves out a role for itself as a regional power. For example, it has defendedIran’s nuclear program and expanded economic ties withTehran even as theU.S. seeks to isolateIran.Turkey has also scraped visa requirements forLebanon,Jordan andSyria and signed agreements to improve trade and cultural exchanges with these countries. Finally, after years of campaigning to join the European Union despite Europe’s lukewarm reaction to it,Turkey now seems to be focused on building its presence and influence in Central Asia and theMiddle East. Considering the rock solid Turkey-US relations, and the fraying Europe-Israel relations,Turkey may deem it no longer necessary to foster close Turkish-Israeli relations.

[i] For more about Israel’s assault on Gaza see CJPME’s factsheets at www.cjpme.org