CJPME Factsheet 100, published October, 2010: This factsheet looks at the United Nations Human Rights Council (UNHRC) report on the 2010 Israeli attack on the Gaza aid flotilla. This factsheet provides an overview of the members behind the UNHRC fact-finding mission, their methodology, their key findings, the possible follow-up to the mission’s report, as well as Canada’s response to it.

Factsheet Series No. 100, created: October 2010, Canadians for Justice and Peace in the Middle East
View factsheet in PDF format 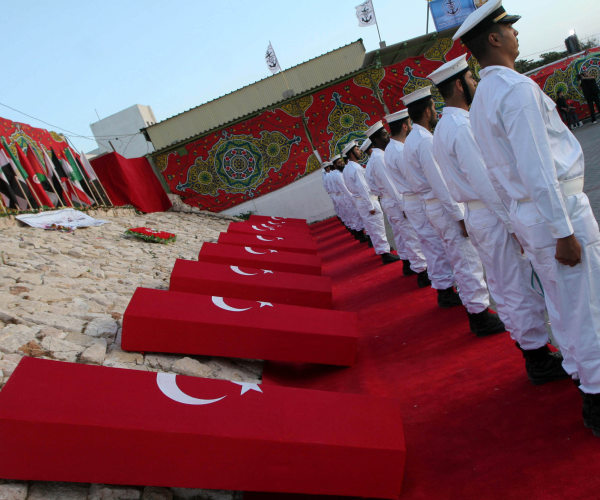 What was the mandate of the UN HRC fact-finding mission?

“dispatch an independent international fact-finding mission to investigate violations of international law, including international humanitarian law and human rights law, resulting from the [May 31, 2010] Israeli attacks on the flotilla of ships carrying humanitarian assistance’ to Gaza.”[i]

It must be noted that the Mission report clarifies that although the resolution’s wording assumed that such violations had occurred, the Mission itself “did not interpret its task as proceeding on any such assumptions. It could not determine what its position was until the Mission came to its conclusion on the facts.”[ii]

Who led the UNHRC fact-finding mission?

On July 23, the UNHRC President appointed the following members of the Mission:[iii]

The Office of the United Nations High Commissioner for Human Rights (OHCHR) also established a secretariat to support the Mission. Those experts were assisted by external specialists in forensic pathology, military issues, firearms, the law of the sea and international humanitarian law.

What methodology did the Mission use?

The Mission first had discussions in Geneva with the Permanent Representatives of Israel, Jordan, Turkey, the United Kingdom and the US, as well as with the Permanent Observer Mission of Palestine to the United Nations. At the end of a “most cordial meeting” on August 18, Israel’s Permanent Representative informed the Mission in writing that “the position of his Government was one of non-recognition of, and non-cooperation with, the Mission.” Nevertheless, the Mission did review the transcripts that were made public from Israel’s own civilian-led investigation — the Turkel inquiry — and took them into consideration.[iv]

The fact-finding mission conducted interviews with 112 witnesses in Geneva, London, Istanbul and Amman. It gave particular weight to the testimony of flotilla passengers and crew. It also examined forensic reports and interviews with medical and forensic personnel in Turkey, as well as written statements, video film footage and other photographic material relating to the incident. On the basis of all the information received, the Mission reconstructed a picture of the circumstances of the attack and its aftermath.[v]

What were the key findings of the mission?

The Mission concluded that it found evidence to support prosecutions of the following crimes within the terms of Article 147 of the Fourth Geneva Convention:[vi] 1) wilful killing of civilians; 2) torture or inhuman treatment; and 3) wilfully causing great suffering or serious injury to body or health of civilians.

The Mission also concluded that a series of violations of Israel’s obligations under international human rights law—including the right to freedom from cruel treatment, arbitrary arrest or detention and freedom of expression—had occurred.

The Mission made the following findings:[vii]

The Mission concluded that the conduct of the Israeli military and other personnel towards the flotilla passengers was not only “disproportionate to the occasion” but demonstrated levels of “totally unnecessary and incredible violence.”  The report concluded that such behaviour could not be justified or condoned on security or any other grounds, and constituted a “grave violation of human rights law and international humanitarian law.” (para. 264)  The Mission determined that a humanitarian crisis existed at the time the flotilla was intercepted, and that on those grounds alone, the blockade of Gaza was illegal.  Based on this assessment, it concluded that the interception to enforce the blockade was also illegal. (paras. 261-262)

What will be the follow-up to the mission’s report?

The Mission report notes that victims of such violations have a right to judicial remedies, reparations proportionate to the gravity of the violations, compensation, and if tortured, medical and psychological care. Victims of violations of the Fourth Geneva Convention have the right to have criminal charges pressed against both individuals and states.

What was Canada’s response to the mission’s report?

While at the UN courting votes for a seat on the UN Security Council, Canadian Prime Minister Steven Harper met with Palestinian Authority President Mahmoud Abbas and Israeli President Shimon Peres separately. According to a statement by Harper spokesman Dimitri Soudas, Harper “noted his disappointment with the unbalanced… [Human Rights Council] report," when he spoke with Peres.[viii]

[i] “Report of the international fact-finding mission to investigate violations of international law, including international humanitarian and human rights law, resulting from the Israeli attacks on the flotilla of ships carrying humanitarian assistance,” United Nations Human Rights Council, 27 September 2010. (paras. 1)