CJPME Factsheet 113, published February, 2011: This factsheet provides an overview of the Muslim Brotherhood, a transnational organization whose organizing principle is “Islam is the solution.” Founded by Hassan al-Banna in 1928 in Egypt, where the British were continuing their military presence despite having declared Egypt independent, the MB is the world’s largest and most influential Islamist organization. This factsheet looks at the Brotherhood during Egypt’s constitutional monarchy (1928-1949), the Nasser years (1950-1970), the Sadat’s presidency (1970-1981), and the Mubarak era (1981-2011).

Factsheet Series No. 113, created: february 2011, Canadians for Justice and Peace in the Middle East
View factsheet in PDF format 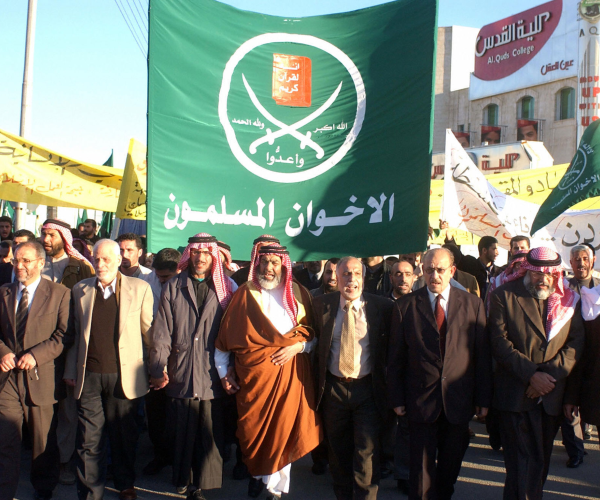 What is the Muslim Brotherhood?

The Muslim Brotherhood is a transnational organization whose organizing principle is “Islam is the solution.” It was founded by Islamic scholar and schoolteacher Hassan al-Banna in 1928 in Egypt, where the British were continuing their military presence despite having declared Egypt “independent.” It is the world’s largest, most influential Islamist organization. It considers itself the moderate face of Islam and an alternative to extremism. Its model of combining political activism with providing community services has influenced Islamist movements around the world. Its stated objectives are to:

Why is the Muslim Brotherhood Egypt’s largest opposition block?

Under Mubarak, well-being and economic opportunities came to depend chiefly on personal connections with the President and his party.  In this context, the Muslim Brotherhood’s provision of needed education, health care and social services has earned it significant popular support and moral credibility. Its willingness to finance these services by donations from its members and modest user fees contrasts sharply with the corruption and ostentatious wealth that characterized the Mubarak regime.

The Brotherhood’s opposition to Western economic and political meddling also resonates deeply for many Egyptians, especially in the wake of Mubarak’s imposition of IMF-prescribed neo-liberal policies. Over 40 percent of Egyptians now live below the poverty line of $2 a day. Meanwhile, a tiny elite connected to the ruling party has become rich by taking monopoly control of profitable state enterprises sold to them in sweeping privatizations. Others got wealthy building gated neighbourhoods and luxury resorts for the super-rich, often on privatized land sold at low prices without proper tendering.[2]

What is the Brotherhood’s relationship to Egypt’s current protests?

The burgeoning protests in early 2011 evolved independently of the Brotherhood, taking it by surprise. After initially keeping its distance, it supported protesters’ demands. On Jan. 31 it went further, urging “the people to continue with their activities . . . until this regime leaves, with its president, its party, its ministers and its parliament."[3] It stated Feb. 4 and 9 that it would not field a presidential candidate or participate in an interim government, and called for a “civil state,” which suggests it will not consider military rule for more than the briefest of intervals. It emphasized the need for freedom of expression. It condemned Al-Qaeda’s call to the protesters to wage jihad, rejected Iran’s claim that the current protests were an “Islamic revolution,” and criticized meddling by Al Qaeda and Iran.[4][5]

How would Egypt’s Muslim Brotherhood behave if in government?

Nobody knows for certain. The Muslim Brotherhood condemned the 9/11 attacks and denounced as “barbaric” the recent bombings of Christian churches by Al Qaeda-linked groups. Radical Islamist groups have criticized the Brotherhood as lacking nerve. Foreign Affairs magazine investigators found the Brotherhood rejected global jihad and embraced electoral democracy.[6] [7] [8] The Brotherhood has also indicated it is not interested in government enforcement of veiling for women.

How has Egypt’s Muslim Brotherhood behaved and fared?

1928-1949: The launching of the Brotherhood during the period of constitutional monarchy:

Al-Banna set up Brotherhood branches throughout Egypt, each with a mosque, school and sports club. It grew to 2 million members by the late 1940s—20 percent of the male population. In 1948, Gamal Abdel Nasser, a young nationalist officer, tried to enlist the Brotherhood’s support for a nationalist revolution. He found the Brotherhood insufficiently nationalist and was thereafter wary of it.  The government outlawed the Brotherhood for attacking British interests. When Prime Minister Mahmoud al-Nuqrashi was assassinated, suspicion fell on the Brotherhood—some of whose members were by then disagreeing with al-Banna’s urgings to refrain from violence. Al-Banna himself denounced the killing but Egyptian security forces assassinated him in 1948.

1950-1970: The Nasser Years—Exclusion and brutal repression

The Brotherhood boycotted the 1950 parliamentary elections, allowing the Wafd party to win, to Nasser’s chagrin. However, it supported the 1952 Nasser-led coup that ended the monarchy and Britain’s military presence. It hoped to actively participate in the new mainly secular government. However, Nasser—the new deputy Prime Minister and Interior Minister—marginalized the Brotherhood. In 1953, he banned all political parties, creating a single party to replace them. The Brotherhood and some left sectors condemned Nasser’s move.

After Nasser’s death in 1970, Vice-President Anwar al-Sadat assumed the presidency and sought a rapprochement with the Brotherhood.  He released their members from prison and encouraged them to organize against the left. The Brotherhood kept the secular left in check while Islamist groups, including more radical ones, flourished. One of them—Islamic Jihad, which Sadat had encouraged—assassinated him in 1981, angered by the Egypt-Israel Peace Treaty.

During the presidency of Sadat’s successor, Hosni Mubarak, the Brotherhood was banned. However, like Sadat, Mubarak needed a significant Islamist opposition to minimize secular opposition forces’ influence. The Brotherhood was at times somewhat tolerated, at others harshly repressed.

In the 80s the Brotherhood tried to rejoin the political mainstream, forming alliances with the Wafd, Labour and Liberal parties. It became the main opposition. In 2000 it won 17 seats in the parliament.  Muslim Brotherhood–linked independents ran in the 2005 elections, winning 88 seats—about 20 percent of the total. Mubarak was shocked, and responded with a crackdown, detaining hundreds of Brotherhood members and amending the constitution to prohibit political activity or parties with a religious foundation. Brotherhood-linked legislators took their duties seriously though, participating in parliament more conscientiously than government legislators. They became a coherent opposition block, forcing parliament to debate issues, such as Egypt’s notorious Emergency Law which allows indefinite detention without charges, and gives security forces sweeping powers to suppress public gatherings.[10]

During the fraud-ridden 2010 parliamentary elections, the government found pretexts to invalidate the candidacies of virtually all Muslim Brotherhood-linked independents. This blatant election rigging sparked large protests that eventually morphed into the ones which forced Mubarak from office.