CJPME Factsheet 128, published July, 2011: This factsheet provides a summary analysis of the numerous discriminatory laws recently enacted by Israel, as well as the many bills that may be passed in the near future. These Israeli measures limit access to education, employment, housing and land by imposing new conditions almost impossible for Palestinians to meet. Others propose to treat political prisoners arbitrarily and inhumanely as a pressure tactic during prisoner negotiations.

Wave of Discriminatory and Anti-democratic Laws in Israel

Factsheet Series No. 128, created: July 2011, Canadians for Justice and Peace in the Middle East
View factsheet in PDF format 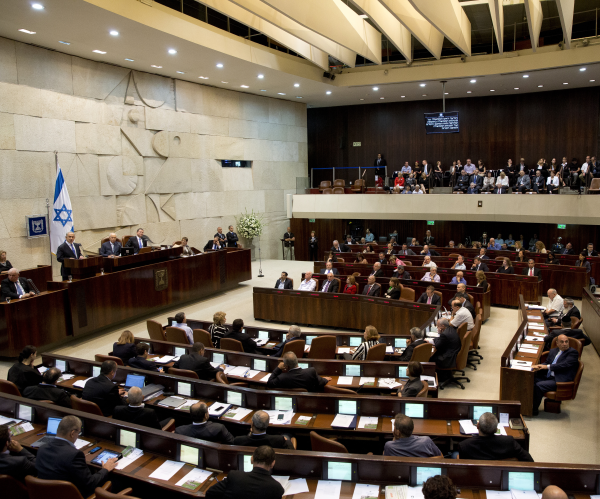 Since Benjamin Netanyahu came to power in February 2009, numerous discriminatory bills have been introduced in Israel, and some are now law. These measures limit access to education, employment, housing and land by imposing new conditions almost impossible for Palestinians to meet.[i] Others propose to treat political prisoners arbitrarily and inhumanely as a pressure tactic during prisoner negotiations.[ii] The following are some of the laws recently enacted and bills that may be passed in the near future.

This new law, enacted in March 2011, legalizes discrimination by allowing small communities in Israel to screen newcomers according to their “socio-cultural compatibility.”[iii] This law seeks to prevent Palestinians from living in Israeli communities that want to exclude non-Jews.  Communities of under 400 inhabitants are now allowed to form committees to assess the applicants wanting to live there. Committees can reject requests for permission to live there by people whom the committees deem “unsuitable to... the social and cultural fabric of the town.” [iv] This law applies to nearly 700 communities operating on Israeli state land. [v]

According to the Adalah Legal Center, the Israel Lands Law amendment of March 2011 prevents individuals or groups from doing any of the following:[vi]

This law defines as “foreigners” anyone who is either a) not a resident or citizen of Israel, or b) not Jewish.[vii]  This new law eliminates the distinction between Palestinian refugees and foreigners with no ties whatsoever to Israel/Palestine. It will also make it impossible for Palestinians who have lost or been denied Israeli residency or citizenship —as often happens—to legally acquire property, even from relatives, or to have stability in rented homes.

This law,penalizes institutions (e.g. schools) for commemorating what Palestinians call “The Nakba” (i.e. the expulsion from their land as a result of the creation of Israel.)  The new law will also penalize institutions for questioning the premise of Israel as a “Jewish and democratic state.” It authorizes the Minister of Finance to reduce the public funding of any institution doing so by an amount up to three times that of any expenditure on such activities.[viii] This will constrain Palestinians’ right to commemorate the Nakba (“Catastrophe”)—the expulsion, dispossession and forced exile that they experienced when Israel was founded. It will also make it expensive for institutions to reject the definition of Israel as a “Jewish” state with its attendant implications of second-class status for non-Jews.

The Discharged Soldiers Law enacted in July 2010 expands the significant benefits already enjoyed by Israel’s former soldiers. It provides special compensation packages for veterans resident in “National Priority Zones”—the Negev (Naqab), the Galilee or the illegal Jewish-only colonies (a.k.a. “settlements”) in the West Bank. Benefits include: one year of free preparatory academic education, full tuition for the first year of academic education, and priority access to student housing, among others.[ix] Given that Israelis of Palestinian origin seldom join the Israeli armed forces (which frequently engage in acts which violate Palestinians’ rights), the new law will widen the gap between Jewish and Palestinian Israelis’ study opportunities. Also, by requiring that benefit recipients be residents of predominantly Arab areas of Israel (the Negev and the Galilee) or Israeli illegal colonies in the West Bank, the government is encouraging greater Palestinian dispossession. In a similar vein, the Bill Awarding Preferences in Services to Former Soldiers contemplates even more generous benefits and privileges to Israeli soldiers; it passed preliminary reading in the Knesset July 5, 2010.[x]

The Employment in the Public Service (Appointments) bill stipulates that when candidates for public service appointments are equally qualified, preference must be granted to those who have served in Israel’s armed forces. It contradicts the Civil Service Law of 2000 obliging government ministers to ensure adequate representation of “the Arab minority” in ministries. On May 22, 2011 the Knesset Constitution, Law and Justice Committee sent the bill to the Knesset plenum for a first reading.[xi] Again, given Palestinians’ reluctance to enlist in the Israeli army, this bill increases the gap between Jewish Israelis’ work opportunities and those of Israelis of Palestinian origin. It is also unjust that the latter will have reduced access to civil service employment although they are expected to pay the same taxes.

As of July 11 2011, civil lawsuits can be filed against anyone alleged to have promoted a boycott of Israeli products, organizations or individuals. No proof of actual damages is required. If found to have committed the civil offence, the defendant may be ordered to provide compensation to the “injured” party of up to 30 000 NIS (approx. CAD $8 500)  Foreigners found guilty of such offences will be forbidden to do business in Israel and banned from Israel for 10 years. If the offender is a foreign country, Israel can withhold payment of debts to that country, use the funds to compensate third parties and ban such countries from doing business in Israel.[xii]

This proposed amendment to the criminal code stipulates that anyone “publishing a call that denies the existence of the State of Israel as a Jewish and democratic state shall be imprisoned.”[xiii] If made law, such a measure would seriously restrict freedom of speech in Israel. This bill passed a preliminary reading on May 27, 2009.

The “Shalit Laws” are a series of bills aimed at imposing harsher conditions on Palestinian prisoners in order to pressure Hamas to release Gilad Shalit, an Israeli soldier held as a prisoner of war.[xiv] If made law, the measures would violate prisoners’ human rights and, as noted by Adalah Legal Center, convert prisoners into “bargaining chips in negotiations.”[xv] The “Shalit Bills” were approved in a preliminary reading on March 29, 2011. According to Adalah, one bill would ban all visits to any prisoner belonging to organizations designated as terrorist. Another would do the same, plus deny such prisoners the right to meet with their lawyer. A third bill stipulates that any prisoner whose release is demanded by a terrorist organization holding an Israeli captive would be placed in absolute isolation and denied all human contact. A fourth bill stipulates that the latter category of prisoner would automatically be denied parole or early release, and after serving his/her sentence, would be again declared a “detainee” and continue to be held. [xvi].

According to Adalah Legal Center, this bill allows law enforcement officials to delay bringing someone suspected of a security offence before a judge for 96 hours, instead of the 48 hours applying to other kinds of detainees.It also allows the courts to extend security-related detentions by 20 days at a time, rather than the current 15, and to hold hearings on detention extensions without the detainee. Adalah notes that this contradicts a February 2010 Supreme Court decision striking down a similar provision in the previous Criminal Procedure Law. [xvii] The lack of judicial oversight increases Palestinians’ vulnerability to arbitrary detention, torture and other abuses. The current bill passed a preliminary reading October 21, 2010.

[vii] Note that under Israel’s Law of Return, Jews from around the world enjoy the automatic right to immigrate to and become citizens of Israel.