CJPME Factsheet 137, published September, 2011: This factsheet provides a summary analysis of the Palmer Report, a commission appointed by UN Secretary General Ban Ki‐moon to hold an inquiry over Israel’s attack on the Gaza Aid Flotilla in 2010.

The Palmer Report on the Gaza Flotilla Incident

Factsheet Series No. 137, created: September 2011, Canadians for Justice and Peace in the Middle East
View factsheet in PDF format 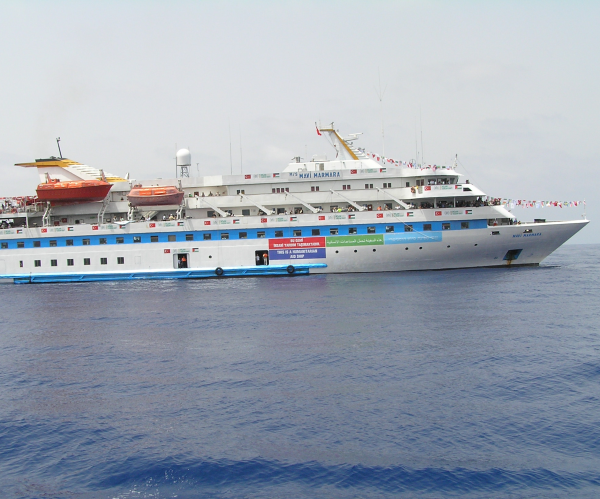 What is the Gaza Aid Flotilla?

On May 31st, 2010, the Israeli military intercepted a flotilla of ships in international waters. The ships were en route to Gaza with humanitarian aid and carrying hundreds of peace activists as passengers. The ships were forcibly boarded under cover of darkness by Israeli soldiers who killed nine of the passengers on board the Mavi Marmara. Dozens of others were badly injured. After the ships were boarded, they and their passengers were taken forcibly to Israel. During this voyage, and afterwards, the activists were treated badly, being denied medical treatment, beaten, humiliated, deprived of food and water, robbed of most of their possessions and denied access to their consular officials.[i]

What is the Palmer Report?[ii]

UN Secretary General Ban Ki-moon appointed a commission to inquire into what had happened. Sir Geoffrey Palmer was appointed to Chair the inquiry. He is a law professor and former Prime Minister of New Zealand. The Vice-Chair was Alvaro Uribe, President of Colombia from 2002-2010, and known as a strong political supporter of Israel.[iii]

The Palmer report (“Palmer”) is essentially the work of these two men. There were two other members of the Panel, representatives of Turkey and Israel. Both issued statements disagreeing with aspects of the report. The inquiry was dependent solely on material supplied by Israel and Turkey. It heard no witnesses; and was able to examine nothing related to the events in an independent fashion. The report’s findings are quite different from the findings of an inquiry conducted in 2010 by the UN Human Rights Council (2010 HRC Inquiry.)[iv]

The 2010 HRC Inquiry interviewed over 100 witnesses, visited Turkey, Jordan and London, and toured the Mavi Marmara. It was assisted by a secretariat that included experts in the law of the sea, the law of warfare and international humanitarian law. The Palmer inquiry had no such expert assistance. Geoffrey Palmer, although a law professor, is a specialist in international environmental law and constitutional law. Alvaro Uribe, although trained as a lawyer, is a career politician.

Palmer begins by noting some of these deficiencies, and that, in consequence, it “cannot make definitive findings either of fact or law.”[v] This was not overly important to Palmer, however, because: “Too much legal analysis threatens to produce political paralysis. Whether what occurred here was legally defensible is important but in diplomatic terms it is not dispositive of what had become an important irritant not only in the relationship between two important nations but also in the Middle East generally.”[vi] Thus Palmer clarifies the purpose of the report - not so much as to determine right and wrong based on international law but as the best path for repairing Israel’s damaged relations with Turkey – sorely damaged following the Israeli attack on the civilian flotilla.

How did the Palmer Report rule on the Naval Blockade of Gaza?

Palmer states that weapons fired from Gaza are a legitimate security threat because militants there have “increased their effectiveness,” and are now able to reach Tel Aviv.[vii] In fact rockets from Gaza are notoriously ineffective and none has ever reached Tel Aviv. While the report dwells on the deaths of 25 Israelis since 2001 from Gazan rockets, and the “enormous psychological toll” inflicted on those living in southern Israel,[viii] no mention is made of the thousands of Gazans killed and wounded in the same period and the psychological toll on Gaza’s 1.5 million residents.

Palmer relies on the San Remo Manual on International Law Applicable to Armed Conflicts at Sea. As does Israel. Palmer ignores, however, Para 102 of that Manual, which holds that a blockade is illegal if:

(a)    it has the sole purpose of starving the civilian population or denying it other objects essential for its survival; or

(b)   the damage to the civilian population is, or may be expected to be, excessive in relation to the concrete and direct military advantage anticipated from the blockade.

The Human Rights Council points out: “The usual meaning of ‘damage to the civilian population’ in the law of armed conflict refers to deaths, injuries and property damage. Here the damage may be thought of as the destruction of the civilian economy and prevention of reconstruction further to damage. One might also note, insofar as many in Gaza face a shortage of food or the means to buy it, that the ordinary meaning of ‘starvation’ under the law of armed conflict is simply to cause hunger.”[ix]

Israel’s true policy in respect of the blockade Gaza “was summed up by Dov Weisglass, an adviser to … the Israeli Prime Minister … ‘The idea is to put the Palestinians on a diet, but not to make them die of hunger,’ he said. The hunger pangs are supposed to encourage the Palestinians to force Hamas to change its attitude towards Israel or force Hamas out of government.”[x] The 2010 HRC Inquiry also referred, on this point, to a statement by the Israeli Attorney-General’s Office that, “harming the economy itself is a legitimate means of warfare and a relevant consideration even when deciding on allowing in relief consignments”.[xi]

Also cited by the 2010 HRC Inquiry were UN Special Rapporteur Richard Falk and the ICRC. Both determined that the blockade of the Gaza Strip “amounts to collective punishment in violation of Israel’s obligations under international law.” The 2010 HRC Inquiry found “that one of the principal motives behind the imposition of the blockade was a desire to punish the people of the Gaza Strip for having elected Hamas. The combination of this motive and the effect of the restrictions on the Gaza Strip leave no doubt that Israel’s actions and policies amount to collective punishment as defined by international law”,[xii] and are “thus illegal and contrary to article 33 of the Fourth Geneva Convention.”[xiii]

Palmer ignores these arguments and also the fact that the attack on the flotilla occurred in international waters, several hours from the blockade area.

How did the Palmer Report rule on Israel’s use of Violence on the Aid Flotilla?

Palmer’s findings with respect to the attack on the flotilla are also troubling. The report does state that the Israeli military used excessive force and that a range of alternative options should have been tried before the armed assault was attempted.[xiv] This finding contradicts Israel’s claims to have attempted to peacefully halt the flotilla before attacking it. Palmer condemns the killing of unarmed civilians who were shot repeatedly from close range, even, in one instance, where the person “may already have been lying wounded”.[xv] Palmer points out that “no evidence has been provided to establish that any of the deceased were armed with lethal weapons.”[xvi] And that, “No satisfactory explanation has been provided to the panel by Israel for any of the nine deaths.”[xvii]

Palmer found, however, that once on board the Mavi Marmara, Israeli soldiers acted in self-defence against a “hardcore of activists”,[xviii] accepting uncorroborated Israeli evidence on this point. Palmer in facts directs blame to the aid activists, accusing them of "significant, organized and violent resistance"[xix] during the boarding by Israeli soldiers and recklessness in taking part in the attempt to break the blockade in the first place.[xx]

The behaviour of the Israeli military after the capture of the flotilla vessels came in for mild criticism. Palmer acknowledges that passengers were ill-treated, denied access to food and water, humiliated and robbed of their possessions.  Nevertheless, Palmer accepted the Israeli assertion that wounded passengers received medical treatment in a “timely and properly [sic] manner.”[xxi]

What were Palmer’s Recommendations?

Palmer recommends that Israel make an appropriate expression of regret for its actions and that it pay into a compensation fund for the victims. Turkey has refused to accept anything less than a full apology from Israel. It also refuses to accept that the blockade is legal and is initiating steps to take the matter to the International Court of Justice. It has expelled the Israeli ambassador from Turkey and withdrawn its own from Israel. Israel refuses to apologize.[xxii]