CJPME Factsheet 138, published October, 2011: Occupy Wall Street, or simply the “Occupy” Movement was a movement which started in New York City and quickly spread.  This factsheets discusses the origins of the movement, and its critique of big money and manipulative and controlling international companies.

Factsheet Series No. 138, created: October 2011, Canadians for Justice and Peace in the Middle East
View factsheet in PDF format 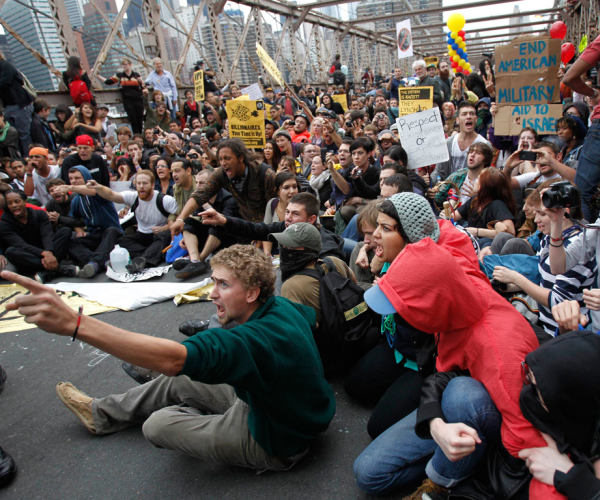 What is the “Occupy Wall Street” Movement?

Occupy Wall Street, or simply the “Occupy” Movement (because it has spread far beyond Wall Street and New York City) is a rapidly growing phenomenon that began as a series of demonstrations in the heart of New York City’s Wall Street financial district. The demonstrations and occupation have been mainly peaceful although initially there were many arrests amid accusations of police brutality. Well known Canadian author and activist, Naomi Klein, was among those arrested in New York during the initial demonstrations. [1]

The Occupy Wall Street protests were initiated by several groups including Canadian activist organization Adbusters,[2] US Day of Rage, Anonymous and the NYC General Assembly, a coalition of students, artists, and activists. The General Assembly is the defacto decision making body, self-described as: “a horizontal, autonomous, leaderless, modified-consensus-based system with roots in anarchist thought,” portraying itself as akin to other recent social movements around the world, e.g. Egypt’s Tahrir Square.[3]

The Wall Street protests, which have been widely copied, and have currently spread to over 1,500 cities around the world,[4] concern a diverse range of topics that principally revolve around social and economic inequality, corporate greed, corporate power and influence over government particularly from the financial services sector.

The protestors’ slogan “We are the 99%” refers to the difference in wealth between the top 1% - whom they feel wield all the power - and the rest of society.

In Canada,  “Occupy” movements have been established in more than 20 cities,[5] with demonstrations being held in financial districts and continuing “occupations” such as that in Toronto’s St. James’s Park, being established in some.

What do the protestors want?

The Occupy movement has been criticized for not having articulated goals or formal demands.[6] Some who oppose it have even sought to tar the protestors with the brush of anti-semitism.[7] Others see it as a "democratic awakening," whose motives are difficult to formulate into a few demands. Although the General Assembly in New York City aims to come up with specific demands, it has responded to criticism by saying that it sees its goal, “not so much as to pass some piece of legislation or start a revolution as to build a new kind of movement.”  Organizers have also made it clear that they seek to jump-start a world-wide movement which could feasibly form a new basis for political organizing.[8] 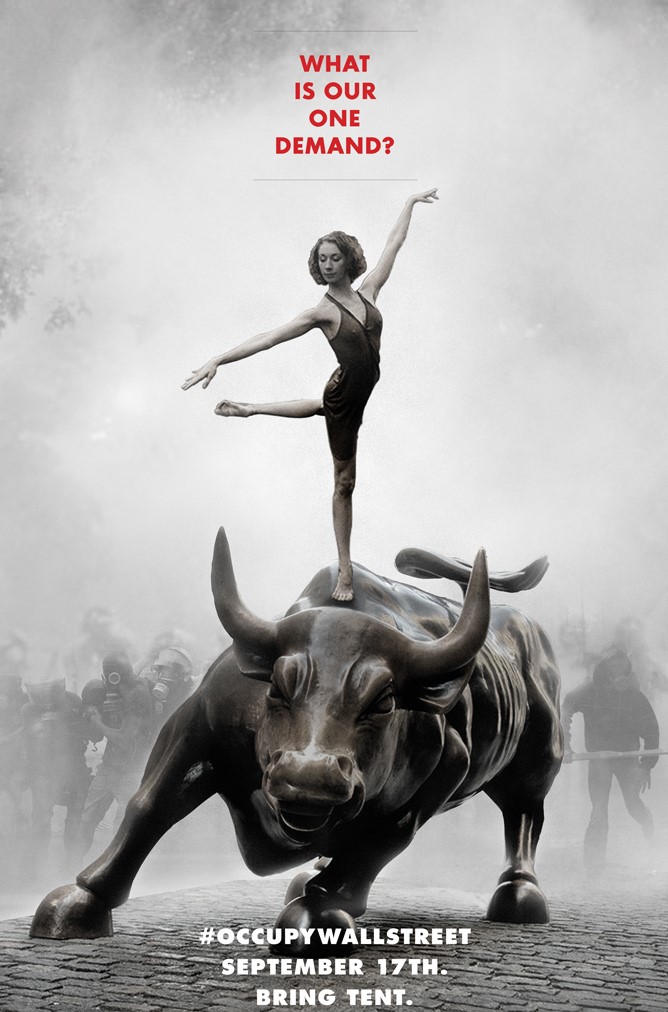 Despite the criticism of the Occupy Movement for lack of purpose and specific demands it is in fact apparent that the protestors (ordinary citizens) are driven by a sense of general malaise and frustration at their inability to influence their governments through conventional methods, such as the ballot box.

The movement resonates with those who sense that governments are hostage to a corrupt financial services sector and to the machinations of lobbyists with very deep pockets. American Pulitzer Prize winning journalist Chris Hedges says the protestors know exactly what they want: “They want to reverse the corporate coup. They want the elites to go.” [9] They want regime change- or what Karl Marx would have called “Revolution.” Speaking with respect to the US protestors, Chris Hedges said that Americans – or the 99% - have seen their agendas hijacked. He instanced the Federal financial bailout, which most citizens opposed, but which passed because the financial services industry wanted it. And the wars in Iraq and Afghanistan, which have been continued by a Democratic government elected on a platform of opposition to those wars. “Lobbyists write our bills,” said Hedges, “citizens be damned.”[10]  The “Occupy” movement has arisen, he opines, from the frustration of ordinary citizens who have determined that the only way forward is civil disobedience.

From the signs and statements of organizers, it can readily be determined that the demands of those taking part in the Occupy Movements include the following:

While most of these demands have worldwide resonance, some are of less significance to Canadians than to Americans – health care for instance.  Others have greater significance, e.g. foreign policy. The majority of Canadians support the Palestinian bid for membership of the United Nations, and a two-state solution to the ongoing Israel/Palestine crisis, based on the 1967 borders. The Canadian government resolutely refuses to listen to its own citizens on this issue.

What are the implications if the Occupy movement continues?

There has been little or no official reaction in Canada to the Occupy movement so far. Finance minister Jim Flaherty has written off the Occupy protests as unorganized, questioning what they’re about. Brian Topp, candidate for leadership of the NDP has, however, used the movement to call for higher taxes on corporations and the wealthy.[11]

While police and municipal authorities have been generally tolerant of the occupation of city parks, there are signs that this attitude may not continue. In Oakland on October 25th, a large Occupy protest was broken up by police using tear gas and flash grenades. Eighty-five people were arrested at the site of the Oakland occupation.

Chris Hedges, who covered the revolutions in Eastern Europe, and in the Balkans, said in an interview with CBC that he remembers conversing with some Germans in 1989. Some of them opined that, within a year, they might see free passage between East and West Germany. Within hours of that conversation, the Berlin Wall had ceased to exist. “Movements, he said, “take on a life of their own”.[12] Quite simply no-one knows what will happen.