CJPME Factsheet 145, published March, 2012: This factsheet looks at the Turkish government under Recep Erdogan, and the various forms it takes as it draws from both Islamic and Western traditions.  While Turkey’s history is unique, and Erdogan’s party and government have had their troubles and challenges, there is much to consider for other countries in the region.

The Turkish Model of Government

Factsheet Series No. 145, created: March 2012, Canadians for Justice and Peace in the Middle East
View factsheet in PDF format 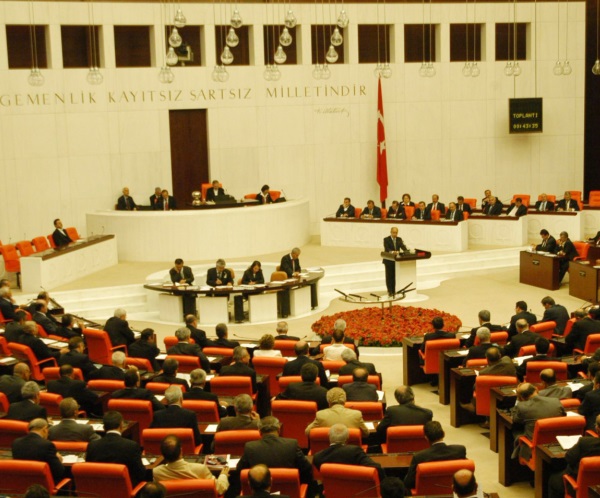 Does Turkey have a Muslim government?

No.  Turkey’s constitution defines it as a secular and democratic state, and there are numerous provisions in the constitution aimed at safeguarding the Turkish state’s secularity.[i][ii] During the Ottoman Empire, the Sultan was also the Caliph—leader of both the Islamic community and the government. However, on establishing the Republic of Turkey in 1923, the founder—army commander Mustafa Kemal Ataturk—abolished the institution of the Caliphate, thus separating the state from any religious authority. In 1928, the clause in the 1924 Constitution that retained Islam as the state religion was removed.[iii] The current constitution of 1982 does not promote any official religion and recognizes the right to freedom of religion for all Turkish citizens. Nevertheless, 99 percent of Turks identify themselves as Muslim.[iv]

What has been the military’s role in Turkish politics?

The military has naturally influenced Turkish politics on national defence and security issues.  It has also established itself as “guardian of the basic principles of the regime”[v] that Ataturk created, especially the principle of secularism. It has launched four military coups and removed four civilian governments since the Republic’s establishment. Two of these coup d’états happened as a result of the direct military intervention in 1960 and 1980, while a third was carried out in 1971 by memorandum. Finally, in 1997, Prime Minister Erbakan from the pro-Islamist Welfare Party was pressured by the military into stepping down.[vi] Still, the military has enjoyed a high degree of popular respect. The most significant instrument through which the military exercises influence is the Milli Guvenlik Kurulu (MGK)—the National Security Council. It is composed of the Chief of Staff, select members of the Council of Ministers, the Commanders of the Army, and the President of the Republic.[vii] The 1982 constitution directed political leaders to “give priority consideration” to the Council’s recommendations.[viii] Recently, the current governing party, the Justice and Development Party (AKP), has been accused by the military of following an Islamist agenda. The party was banned twice after the National Security Council expressed its concern over the party’s perceived undermining of the country’s secularist traditions. Paradoxically, the Turkish military has both bolstered and threatened liberal democratic values: safeguarding the country’s secular nature but also repeatedly intervening in its political life over the years.

In what context did Erdogan’s AKP party come to power?

The AKP Party is a centre-right mildly Islamist political party founded in 2001.[ix] Led by current Prime Minister Recep Erdogan, it came to power in 2002 after the left-leaning government of Bulent Ecevit lost credibility due to the Turkish economic crisis in 2001.[x] The crisis resulted in early elections, and through the use of Islamist slogans the AKP party won a massive majority.[xi] Prior to the establishment of the AKP, both Prime Minister Erdogan and President Abdullah Gul were members of the Welfare party—an Islamist political party founded in 1983. Although it had become the largest party under Erbakan in 1996,[xii] it was forced out of power in 1997 by the Turkish military, which accused it of having an Islamist agenda. Both Erdogan and Gul had left the party prior to its overthrow and formed the AKP party in 2001. Erdogan normally would have become prime minister but had been banned from holding office because of a prison term he had served for reciting a pro-Islamist poem while Istanbul’s Mayor in 1994.[xiii] As a result, Gul became PM for the AKP’s first term in power. Erdogan’s ban was later lifted.

How has Turkey’s Prime Minister Erdogan distinguished himself as a leader?

In spite of the AKP’s colourful background, and its inconsistent human rights record,[xiv] it must be acknowledged that the party has managed to solve a number of major problems in Turkey.  Since the AKP’s assumption of power in 2002, the political scene has been much more stable and any need for military intervention has been averted. The economic policies adopted by the AKP raised the GNP from $300 billion in 2002 to $750 billion in 2008, and the average annual per capita income from $3,300 to over $10,000 in the same period.[xv] As a result, “the Turkish economy … was ranked 16th in the world and 6th in Europe”[xvi] in 2010. In 2009, the party laid out the principles of a new approach to foreign policy. This new approach emphasises good relations with Turkey’s neighbours by enhancing political and economic cooperation, and by positioning itself as a key strategic player in the region. [xvii] As a result, Erdogan has played a much more active role in the Middle East, especially on issues related to Israel-Palestine.  He has also strengthened Turkey’s ties with the European Union and US, both economically and militarily. Relations between Turkey and Israel, once quite cordial, have been strained with the rise of the AKP and its frequent condemnation of Israeli human rights abuses.  Relations reached an all-time low when Israeli commandos brutally attacked a humanitarian aid flotilla headed for Gaza in May, 2010. In this incident, Israeli commandos attacked the Turkish ship Mavi Marmara in international waters in the Mediterranean to prevent it from delivering humanitarian aid to Gaza.  Nine Turkish citizens were killed by Israel in the raid.[xviii] Turkey took several measures to signal its displeasure.[xix]

Domestically, Erdogan proposed a wide-ranging package of constitutional amendments which included “measures to bar gender discrimination, bolster civil liberties, and protect personal privacy.”[xx] However, the core of the package was reduction of the influence of the National Security Council.  It also included measures to give “the president and parliament greater say over the appointments of senior judges and prosecutors.”[xxi] The EU welcomed the constitutional changes yet the opposition, especially the pro-secular Republican People’s Party (CHP), argued that the package undermined the separation of powers and would hand Erdogan too much power, paving the way for an authoritarian regime.[xxii] The opposition also claimed that the package allowed Erdogan to enact what they called his hidden Islamist agenda by forbidding military interference in politics.

Why do some consider the Turkish governance model a potential model for Egypt?

The AKP Party has so far been successful at balancing Turkey’s Islamic identity with liberal democratic values, albeit under the watchful eye of the Turkish military. As a result, some consider the current Turkish government a potential model for other countries in the Middle East, such as Egypt. During the revolutionary changes in Egypt which began in early 2011, Turkey’s stances reinforced this perception. Erdogan has been one of the Muslim world’s leaders most vocal about the demonstrations in Egypt. From the beginning, he called on Mubarak to be responsive to the demands of the Egyptian people and to step down.[xxiii] Following the 2011 Egyptian Revolution and Mubarak’s fall, the Muslim Brotherhood was legalized and launched a new party called the Freedom and Justice Party (FJP).  During the first post-Mubarak elections, the FJP “won 47 percent of all seats for the lower house of parliament.”[xxiv] Representatives of the FJP have asked Erdogan if his party could support them in their politics. However, some factions in the party criticized Erdogan when he explicitly encouraged the FJP to adopt a secular constitution.[xxv] Thus, whileEgypt’s Islamist political players may be grateful for Erdogan’s defence of the protesters in 2011, and impressed by his government’s economic achievements, many are less convinced of the virtues of secularist governance per se.

[i] Constitution of the Republic of Turkey, preamble, Article 2, and various other articles.

[viii] Cook, Steven A. “Istanbul on the Nile: Why the Turkish Model of Military Rule is Wrong for Egypt.” Foreign Affairs. August 2011. p. 1.

[xiv] Credible human rights organizations, such as Human Rights Watch, have documented grave violations of press freedom, freedom of expression and the fundamental rights of the Kurdish minority.