CJPME Factsheet 159, published September, 2012: By mid-2012, about 60,000 African migrants had emigrated to Israel over the previous five years.  This factsheet looks at the Israeli government and society’s view of these migrants, and whether or not the handling of these migrants had respected international law.

The Situation of African migrants in Israel

Factsheet Series No. 159, created: September 2012, Canadians for Justice and Peace in the Middle East
View factsheet in PDF format 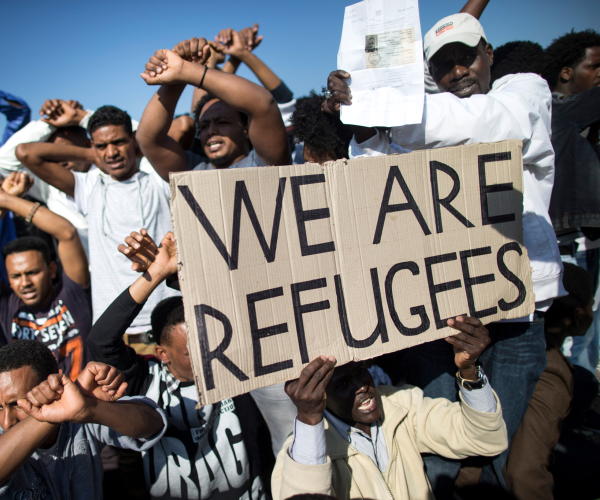 Who are the African migrants in Israel?

As of mid-2012, an estimated 60,000 African migrants[1] were living in Israel, the vast majority after crossing the porous border with Egypt during the last five years. Most come from Sudan, South Sudan, Eritrea, the Democratic Republic of Congo, the Ivory Coast and Ethiopia.[2] Many choose Israel to flee to because it is the only economically advanced potential refuge that they can reach walking.

While many are refugees or asylum seekers as defined by international law,[3] others are economic migrants, often fleeing poverty amid or in the wake of internal wars. According to a report published by Tufts University[4] about the experiences of Sudanese and Eritrean migrants in Tel Aviv, migrants face considerable costs and dangers getting across the Sinai to Israel. Yet they continue to arrive. Most live in the large urban centers, notably south Tel Aviv; indeed, south Tel Aviv's Neve Shaanan Street is dubbed "little Africa" by many Israelis.

How do Israelis see African migrants?

Since mid-2009, the government has tried to discourage the inflow of Africans. Tensions between Tel Aviv’s Jewish residents and African migrants escalated dramatically in 2012. Seven different attacks on migrants took place between April 27-29 (the weekend after Israel’s Independence Day) and May 20, 2012. The attacks included the firebombing of African migrants’ homes and businesses, and an arson attack on a nursery.[5]

Instead of challenging the xenophobia behind the attacks, government officials reinforced it. On May 16, 2012, Interior Minister Eli Yishai told Israel’s Army Radio that most of the African migrants were engaged in criminal activities and should be placed in detention facilities.[6] On May 20, Prime Minister Benjamin Netanyahu said that the "phenomenon of illegal infiltrators from Africa is extremely serious and threatens Israel's social fabric and national security.”[7] On May 21, Justice Minster Yaakov Neeman called the migrant issue “a national calamity” Like Netanyahu, he referred to the migrants as “infiltrators.”

On May 23, about 1000 Israelis demonstrated in Tel Aviv, waving signs saying, "Infiltrators, get out of our homes." A car carrying Africans was attacked and shops serving the refugee community were looted.[8] At least three MKs from the Likud party participated in the demonstration.  One, Miri Regev, said “The Sudanese are a cancer on our body.”[9] Although Netanyahu deplored the violence the next day, his proposed solution was to expel the migrants and build a fence on the Egyptian-Israeli border.[10]  On June 3, Interior Minister Eli Yishai complained that “Most of the Muslims that arrive here do not even believe that this country belongs to us, to the white man."[11] Foreign Minister Avigdor Lieberman—perhaps fearing international reaction—criticized Yishai’s comments, and urged cabinet ministers to speak less.[12] An apartment housing ten Eritreans was firebombed June 4, injuring at least four.[13] The government began rounding up and deporting the migrants days later (see section below).

Many Israelis see the influx of Africans, who have no religious or cultural ties to Israel, as threats to Israel’s Jewish identity. Others believe that a country created by and for refugees should not be turning away refugees. For some, the rounding up of Africans is reminiscent of the round-ups of Jews during the Nazi Holocaust.[14][15][16]

What measures have been taken against African refugees?

On June 3, Netanyahu ordered his ministers to accelerate efforts to deport migrants from South Sudan, the Ivory Coast, Ghana and Ethiopia living without permission in Israel—some 25,000 in total. Those from Eritrea, Sudan and Somalia—whose lives, he acknowledged, would be at risk if they returned to their countries of origin—would be detained in “holding facilities” to be built as quickly as possible in the Negev, until third countries to receive them were found.[17] The same day, the “Law to Prevent Infiltration” came into effect, allowing detention of migrants for up to three years without trial, or deportation and prison sentences of 2-15 years for anyone employing, sheltering or transporting “illegal” migrants.[18]

After a June 7 Jerusalem District Court decision upholding the deportation plan,[19] Israeli authorities arrested and detained over 700 South Sudanese migrants.[20] South Sudan agreed to allow them back, although it remains politically unstable. The Israeli government offered free air passages and a 1,000-euro grant to migrants leaving “voluntarily.” According to Yishai, the next stage would be “the removal from Israel of all the infiltrators from Eritrea and Sudan.”[21] The first planeload — 127 men, women and children—left Tel Aviv for South Sudan June 11.[22] After a six-week round-up of South Sudanese migrants, a final planeload left July 25, bringing the total deported to South Sudan to 850-900.[23] An appeal by 132 Ivorians was rejected by the Jerusalem District Court June 24, paving the way for their deportation too.[24]

Meanwhile, the government has continued building a detention centre in southern Israel, near the Egyptian border. With a capacity of 11,000-30,000, it will be the world’s largest such facility.[25] As well, Netanyahu has ordered the erection of a 241-kilometre-long and 4.9-metre-tall steel wall at the Israeli-Egyptian border to stem the inflow of Africans. He has also reportedly asked officials to examine whether a similar fence should be built on the border with southern Jordan, in case migrants try to cross the narrow Gulf of Aqaba to enter Israel.[26]

Does Israel respect the international legal rights of African refugees and migrants?

No. Even prior to the deportations of 2012, Israel’s treatment of the African migrants—both the economic migrants and asylum seekers—ignored their rights.

Despite being a signatory since 1954 of the 1951 International Refugee Convention, Israel does not have legislation defining refugee claimants’ rights. The asylum process is marked by unclear policies and procedures. The decisions are made by a single person—the Interior Minister. Migrants from Eritrea and Sudan have not been allowed to file individual refugee claims. Since 2007, detention of arriving asylum seekers has become the norm; thousands have remained imprisoned until determination of their status. When prisons reach capacity, asylum seekers have been released into Israeli cities without any further assistance. Migrants’ access to health care, housing, education, vocational training and employment ranges from very limited to none at all. Hundreds, including pregnant women, children and unaccompanied minors have remained homeless. Those migrants allowed to apply for refugee status often have to wait lengthy periods, sometimes years, for a decision.   Such delays lead to exploitation by employers, and psychological issues for claimants.The only medical and support services refugees receive are provided by Tel Aviv–based human rights organizations, such as the African Refugee Development Centre and Physicians for Human Rights. Since its establishment in 1949, Israel has recognized fewer than 150 individuals as refugees.[27][28]

Such treatment and Israel’s Law to Prevent Infiltration, violate Article 13 of the UN International Covenant on Civil and Political Rights, which specifies the right of “aliens” not to be expelled from a host country without an opportunity to plead their case with representation and due consideration of their individual situations. Such treatment also violates the International Convention on the Protection of the Rights of All Migrant Workers and Members of their Families.

As noted by Segal Rosen, of the Israeli organization Hotline for Migrant Workers, "It looks as if the government completely ignored the fact that the majority of these people are genuine refugees."[29]

[1] In this Factsheet, “migrants” encompasses economic migrants and asylum-seekers.

[3] A refugee is a person who is flees the country of his/her nationality due to fear of persecution, either as an individual or as a member of a group. Asylum seekers are those who seek to be officially recognized as refugees by the host state.

[5] Schlagman, Nic. "Mounting Tensions between Refugees and Israelis." AfricanRefugeeDevelopmentCenter. May 20, 2012.