CJPME Factsheet 162, published January, 2013: This factsheet was published after the release of an amateur Islamophobic video, Innocence of Muslims, in September, 2012 led to violent demonstrations throughout the Muslim world.  The factsheet analyzes the movie and the reactions to it, both internationally, and in Canada.

Protests in the Muslim world – September 2012

Factsheet Series No. 162, created: January 2013, Canadians for Justice and Peace in the Middle East
View factsheet in PDF format 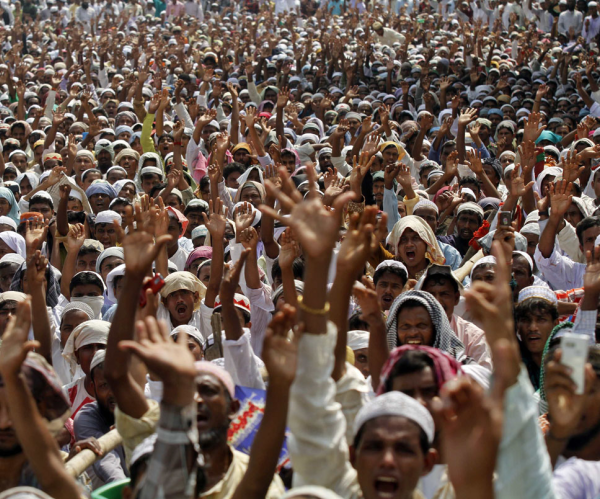 Who is demonstrating and why?

In September 2012, following the broadcast of a 14 minute excerpt of an amateur Islamophobic video, Innocence of Muslims, and its important publicizing by the medias, violent manifestations erupted throughout the Muslim world. This movie defies and tarnishes the reputation of the Prophet Muhammad and has shocked the Muslim community by clashing with values held dearly by numerous believers. To many, this video was perceived as an attack and a lack of comprehension on the part of the Western world, particularly the United States towards Islam. [1]

Many protests and violent acts occurred following the airing of the video throughout the Muslim world: embassies were attacked (mainly American ones), and there were suicide‑bombings. These events have led to the death of over 75 people worldwide.[2] While these violent manifestations have been fiercely publicized, many peaceful demonstrations have also taken place.[3]

Where did the movie come from?

The movie’s director, Nakoula Basseley Nakoula, also known under a variety of pseudonyms including Sam Bacile, is a Coptic Egyptian currently residing in California. Before the unveiling of his origins, Basseley claimed to be an Israelo-American.[4] Many suspect he made this video with the purpose of rekindling tensions between non-Muslims and Muslims. [5]

Actors from the movie accuse the producer of having replaced the initial scenario with Islamophobic statements, through crude dubbing, without their consent. They claim to have been misled and to have participated in this project without knowing it would be about the Prophet’s life (rather, they accepted to play in Desert Warriors, a production about neither Islam nor Muhammad). It is not known whether an entire movie actually exists or if only a 14 minute trailer was produced. [6]

What were the reactions to the protests?

There exists an interdependence on many levels between the western and Muslim worlds, particularly in the economic and strategic spheres, and this partly explains why the international community reacted so quickly to the protests against the video. These reactions can be categorized into five distinct types. [7]

Firstly, some political and religious leaders used the video with the sole purpose of provoking and arousing the anger of Muslims against the Western world, especially against the United States. Some radical Islamist groups used the polemic to reinvigorate the anti-American sentiment in a region where the United Sates aren’t popular, in addition to taking advantage of the governments’ weakness and social instability. [8] For instance, Ghulam Ahmad Bilour, a Pakistani minister, announced he was willing to offer compensation to whoever killed the movie’s producer. He in fact called upon Al-Qaeda and the Talibans to eliminate him. [9] Iran’s Minister of Culture has announced that ‘in reaction to the intolerable insult to the Great Prophet of Islam we will refrain from taking part in this year’s Oscars.’[10]  He justified this decision by claiming that this video was not only produced in the US, but that the latter did not prevent its circulation. [11]

In the second group, the moderate leaders of the Muslim world are looking to maintain peace and to ease incitement to violence. Egyptian President Mohamed Morsi is a good example of this type of leadership. He attempted to find an equilibrium between the values of his country and its interests vis-à-vis the West. Thus he condemned the movie as well as the attack on the American consulate in Benghazi, Libya, urging for calm and reminding Egyptians that freedom of speech is a guarantee for all.[12]

The third category regroups Western politicians and moderate international organizations. Ban Ki-Moon, the United Nations’ Secretary General, called the movie shameful and scandalous. He declared that when freedom of speech is used with the intention of insulting and hurting others, it can’t be protected in the same way. [13] His message was meant to recognize the existence of religious intolerance, while also suggesting that some limitations on freedom of speech could be acceptable, although the latter is a fundamental liberty guaranteed by international law and many democracies. [14] American President Barack Obama and Secretary of State Hilary Clinton also denounced the movie, but have refused to ban it on account of freedom of speech. They added that despite the bad intentions of the movie, no violence or death resulting from the protests was justified. [15]

Fourthly, there are the reactions of moderate religious leaders. For instance, the Organization of the Islamic Conference (OIC), which has a permanent delegation at the United Nations, has asked for the blasphemy to be sanctioned so as to prevent defamation. This demand has reportedly influenced the declaration made by Ban Ki-Moon. [16] Coptic Christian leaders in the United States have also criticised the video, calling it offensive and inflammatory, in addition to expressing their concern regarding a possible escalation of tensions between Muslims and Coptic Egyptians. [17]

Finally, Western personalities have used the situation to propagate stereotypes on Muslims. This has been the case for the American pastor Terry Jones, infamous for having burned pages of the Quran. He supported Innocence of the Muslims and promoted it. [18]

How should a secular society apply freedom of speech in a situation like this one?

The controversy surrounding the Islamophobic movie as well as Ban Ki-Moon’s declaration on this topic have revived an important debate, one regarding freedom of speech and its limits. Some affirm that one’s liberties end where the liberty of others begins, while others believe that we all have the liberty to express ourselves as we wish, regardless of whether or not we are offensive to others. These opposing point of views have been expressed in speeches given by both American and Muslim leaders, the former claiming that the movie could not be banned in the name of freedom of speech, while the latter asserted that limits needed to be drawn to freedom of speech so that it did not conflict with Muslim beliefs.

According to the first article of the Canadian Charter of Rights and Freedoms, the fundamental freedoms, including the freedom of speech, are ‘subject only to such reasonable limits prescribed by law as can be demonstrably justified in a free and democratic society.’[19]  An example of a limit applied to a freedom is described in section 319 of the Canadian Criminal Code relating to heinous propaganda (inciting hatred in a public place against an identifiable group).[20]

Jean-François Gaudreault-Desbiens, a professor from the Université de Montréal, contends that the concepts relating to heinous propaganda and denigration of ideas have often been confused. Under Canadian law, only the first of the two can be judged as criminal. However, the Islamophobic video cannot be judged as a case of heinous propaganda because it does not encourage badly treating human beings. Thus the movie is not reprehensible under Canadian law.[21] This position has been that of many secular societies.

According to Tariq Ramadan, professor at Oxford University, specialised in Islamic studies, there exists an incomprehension of the Muslim faith but also of Western societies and their beliefs. Both of these reciprocal lacks of comprehension need to be fought. Some countries apply secularisation, that is the progressive loss of the socio-cultural importance of religion as guiding conduct, but individuals coming from these states need to understand that this is not the norm everywhere. Ramadan furthers that an attack on one’s beliefs does not justify violence. Rather, one needs to know how to ignore these insults and to not give importance to them.[22]

[6] “« L’innocence des musulmans » : nouvelle plainte de Cindy Lee Garcia”. Le Monde. September 25, 2012. At the time of the publication of this factsheet, the existence of a full-length film had yet to be confirmed.