CJPME Factsheet 180, published November, 2013: In the summer of 2013, the government of Mohamed Morsi was overthrown by the Egyptian Army.  This factsheet looks at the circumstances of the coup d'étât and the events leading up to it.

Factsheet Series No. 180, created: November 2013, Canadians for Justice and Peace in the Middle East
View factsheet in PDF format

Was Morsi deposed by a popular revolt?

Not really. It is true that there was considerable popular dissatisfaction with Mohamed Morsi’s inability to lift the economy out of the doldrums. Secular groups had also become nervous about the Islamic slant that Morsi’s party was giving to the proposed new constitution, although another party, Al Nour withdrew its support for Morsi, claiming the new constitution was not Islamic enough. And unfortunately, Morsi governed as if his narrow electoral victory allowed him to ignore the wishes of other major political currents.  As a result of these and other factors, large demonstrations opposing Morsi erupted June 30, 2013.

How big were the anti-Morsi demonstrations June 30?: Anti-Morsi forces, including the military, claimed that 13 to 34 million Egyptians demonstrated for Morsi’s resignation, more than had voted for Morsi in the first place. However, writer and long-time Cairo resident Jack Brown sagely notes that the combined surface area of Tahrir Square, adjacent streets and the Qasr Al-Nil bridge is 56,200 square meters. Even tightly packed (4.7 people per square metre), these spaces could not have held more than 264,100. Adding the maximum number of people that may have participated in the other Cairo demonstration, in Heliopoolis in front of the Presidential Palace, 211,000, the anti-Morsi demonstrators in Cairo numbered well under half a million, [i] far less than the 3 million Cairo and Giza citizens who voted for him in even the first round of the election.

However, the military and the remnants of the Mubarak-National Democratic Party power structure had every reason to exaggerate the degree of public rejection of Morsi. This was an essential pretext for the July 3rd military coup, during which Morsi and most of his cabinet were arrested (to be subsequently kept incommunicado until trial in November.) Egypt’s military elite and powerful former regime interests in business and media thereby reasserted their control over Egypt.

Why did Egyptians reject ex-President Hosni Mubarak in February 2011?

In short, Egyptians sought an alternative to poverty and corruption, but had few instruments other than protest to press for change. While the leaders of Egypt’s armed forces allowed ordinary Egyptians to depose Mubarak during Egypt’s “Arab Spring,” they still hoped to emerge at the top of an amended but still authoritarian post-Mubarak order. (The Armed Forces were miffed over Mubarak’s plan to install one of his sons, rather than a military man, in the presidency.) Within hours of Mubarak’s fall, a group of aging generals—the Supreme Council of the Armed Forces (SCAF)—assumed control of Egypt, promising elections and a transfer of power to civilian rule.

How did Mohamed Morsi and the Muslim Brotherhood win elections in 2011 & 2012? 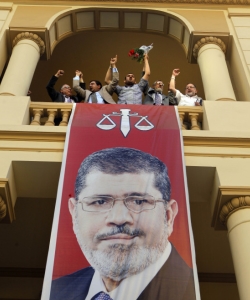 Legislative elections (November 2011-January 2012):  The elections for Egypt’s parliament, the People’s Assembly, took place in phases between November 2011 and January 2012. They left the Freedom and Justice Party, tied to the Muslim Brotherhood, and the Nour Party, a harder-line Islamist party, in first and second place, respectively.[vi]

Presidential elections: In the first round (May 23-24, 2012), Mohammed Morsi, the Freedom and Justice Party’s candidate, received 24.78 percent of the vote. Ahmed Shafik, a former Air Force commander whom Mubarak had appointed Prime Minister during the crisis that toppled him, enjoyed the SCAF’s backing and received 23.66 percent. Hamdeen Sabahi—a prominent dissident during the Mubarak and Sadat regimes—was the candidate of the left-leaning Dignity Party and received 20.72 percent. Abdel Fotouh, an independent candidate backed by the Salafist Nour party as well as more liberal Islamist parties, obtained 17.47 percent. Amr Moussa, an independent secular candidate, received 11.13 percent. The other candidates obtained a combined total of 2 percent of the first round vote. These results left Morsi and Shafik as the only candidates in the run-off elections of June 16-17.

Two days before the run-offs, Egypt’s Supreme Constitutional Court—composed of Mubarak-appointed judges—dissolved the new parliament and ruled that Shafik could stand as a candidate, despite his alleged financial improprieties during the Mubarak years. Notwithstanding these machinations, Morsi emerged with 51.23 percent to Shafik’s 48.27 percent.

Morsi is Egypt’s first president to come to power through elections and also the first not from a military background.[vii]

Were the elections fair?

The left-leaning, centrist and secular currents—still recovering from decades of repression—insisted they needed constitutional guarantees and more time in order to be able to compete safely and effectively in elections. In contrast, the Brotherhood, although technically illegal under the final years of Mubarak, had enjoyed more tolerance, and had been organizing for years in the mosques.  As a result, the Brotherhood was much more election-ready. The Brotherhood—with little to lose and everything to gain by early elections—agreed to the election timetable proposed by the SCAF. The balloting itself appears to have been relatively fair.[viii]

Regarding the legislative elections, the Carter Centre noted:

“(T)he strict regulatory environment for civil society organizations, the ongoing implementation of the emergency law and the subjection of civilians to military trials, the repression of political activists, and the stifling of political dissent in the state-owned media led to confrontations between the military and civilians, sometimes resulting in violence. In spite of these concerns and in spite of visible flaws in the election process itself, it is the assessment of the Carter Center’s mission that the results of the parliamentary elections appeared to broadly represent the will of Egypt’s voters.”[ix]

The electoral authorities prevented the Carter Centre from observing the situation on the ground in the critical weeks prior to the presidential elections. The Centre noted that the transition to civilian rule, and the elections themselves, were plagued by the lack of a constitution protecting fundamental rights and ensuring checks and balances of power.[x]

What has happened since the coup?

On August 14, Egyptian security forces killed hundreds of mostly peaceful supporters of President Morsi in Cairo. According to Human Rights Watch, “in dealing with protest after protest, Egyptian security forces escalate quickly and without warning to live ammunition, with deadly results. Thirteen hundred people have died since July.”[xi] SCAF has jailed most of the Muslim Brotherhood leaders, injured, killed or jailed hundreds of its grassroots members and confiscated its assets.

SCAF has appointed 10 retired generals and two police commanders from the Mubarak era as provincial governors.[xii] Mubarak himself was released from prison by the new interim government in August and is under house arrest in a military hospital at the writing of this factsheet.

SCAF has discarded or is now ignoring most of the civilian forces that called for Morsi’s resignation, and in some cases supported the coup.

[ii] Mubarak—a former military officer who had, unelected, assumed the presidency in 1981—had continued in power thanks to rigged elections and the establishment of a vast network of people at all social levels who were beholden to the National Democratic Party for work, services and favours. The 2010 elections that extended his rule for another term were characterized by rampant ballot-box stuffing, armed intimidation of voters, a media crackdown and detentions of political activists.

[iii] An emergency law giving security forces sweeping powers to detain people indefinitely remained in effect from 1981 to 2011, despite Mubarak’s 2005 promise to let it expire. Arbitrary detention and torture of social activists and assaults on protesters were common, and press freedom was restricted. Egypt’s constitution did not genuinely protect  fundamental human and civil rights.

[v] According to a CBC report, Egypt’s Gross National Income was a mere $2000 per family. Human Rights Watch estimated that 40 percent of Egyptian families were under the poverty line. Egyptian labor law inhibited the formation of independent unions and severely restricted the right to strike, leaving Egyptian workers unable to press for a fairer distribution of income. Under Mubarak’s sweeping privatisation policies, families close to his regime appropriated profitable public enterprises and vast areas of state-owned lands. They also acquired monopoly positions in strategic commodity markets such as iron, steel, cement and wood. Meanwhile, hazardous industries grew without effective regulation, to the detriment of public health, while “backbone” industries were allowed to decline.

[viii] However, Sabahi, who came third, alleged that the interior ministry had provided 900,000 ID cards to soldiers to enable them to vote for Shafik.

[ix] The Carter Centre, “Final Report of the CarterCenterMission to Witness the 2011–2012 Parliamentary Elections in Egypt”, p. 2

[xii] The Independent. “Egypt on the brink of a new dark age, as the generals close in for the kill,” Patrick Cockburn, August 18, 2013.