The thwarting of Egypt's muslim brotherhood

Factsheet Series No. 186, created: September 2014, Canadians for Justice and Peace in the Middle East
View factsheet in PDF format 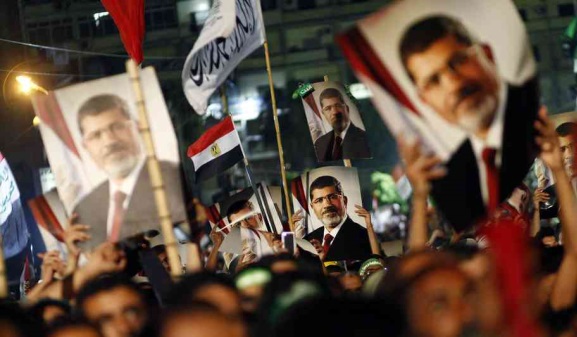 What is Egypt’s Muslim Brotherhood and how did it emerge?

The Muslim Brotherhood is a religious, social and political organisation whose central principle is “Islam is the solution.” It was founded in Ismailiya by schoolteacher and Islamic scholar Hassan al-Banna, who was asked to do so by six Suez Canal Company labourers in 1928. Egypt was at that time a constitutional monarchy, but the British continued to have a military presence there.

Al-Banna, from a socially conservative rural family, had been appalled by the gambling, materialism, alcohol consumption, prostitution and promiscuity that he observed in Cairo in 1923. He witnessed the same in 1927 in Ismailiya, a small city on the Suez Canal, where he also saw evident foreign domination: a British military camp, foreign ownership of public utilities, and luxurious residences of the foreign employees of the foreign-owned Suez Canal Company, next to Egyptian workers’ squalid homes. He blamed secularism, and believed that reviving Islamic values would cure Egypt’s social and economic ills.

How big is the Muslim Brotherhood, and how strong is it militarily?

As of late 2011, Egypt’s Muslim Brotherhood had an estimated 600,000 members.[1] It currently does not control any territory. The vast majority of its members are unarmed. The weapons wielded by a tiny minority of its members during July 2013 clashes with police and soldiers were rudimentary: sticks, knives and pistols.

Why do many Egyptians support the Muslim Brotherhood?

Under President Hosni Mubarak (1981-2011), citizens’ well-being and economic opportunities came to depend chiefly on personal connections with Mubarak and his party. The Brotherhood’s provision of needed social services—financed by member donations and modest user fees—thus earned it popular support and moral credibility, and contrasted sharply with Mubarak’s corruption and ostentatious wealth.

The Brotherhood’s opposition to Western economic and political meddling also resonated with many Egyptians, especially after Mubarak’s imposition of IMF-prescribed neo-liberal policies. Over 40 percent of Egyptians were below the poverty line of $2 a day. Meanwhile, a tiny elite connected to the ruling party became rich, some by taking control of profitable state enterprises sold in sweeping privatizations, others by building gated neighbourhoods and luxury resorts for the super-rich, often on privatized land sold at low prices without proper tendering.[2] The military operated many businesses.

How does the Brotherhood operate?

Historically, the Brotherhood’s principal activities have been religious proselytization, provision of services, advising governments, peaceful demonstrations and, in recent decades, participating indirectly or directly in electoral politics, when allowed. This mixture of spiritual and political activism proved popular. By 1938, it had 300 branches and 50,000–150,000 members[3] (of a total population of 16 million.) The government and King began consulting it. Its growth was due to the following:[4]

Egyptian opposition to British rule intensified, becoming occasionally violent in the late 30s and the 40s. Some Brotherhood members ignored Al-Banna’s urgings to refrain from violence, a pretext for crackdowns on the entire Brotherhood.  Government security forces assassinated Al-Banna in 1948.

1952 – 1970: Marginalisation and harsh repression under Nasser’s “Free Officers”: In 1952 young army officer Gamel Abdel Nasser led the Free Officers’ coup.[5] Although the Brotherhood had supported it, Nasser marginalized them, and conducted brutal crackdowns in 1954 as Interior Minister, and again in 1966, as President. He banned existing political parties, replacing them with a single party; 20,000 people—mostly Brotherhood members—were arrested and thousands tortured. Eight MB leaders were sentenced to death. Others were jailed until the mid-70s. Most other leaders went into exile.

1970 – 1981: Accommodation during Sadat’s presidency: Nasser’s successor, Anwar al-Sadat, released Brotherhood members from prison, encouraging them to organize in order to limit the left’s growth. The Brotherhood’s resurgence kept the secular left in check but other Islamist groups, including more radical ones, flourished. One—Jihad, which Sadat had encouraged—assassinated him in 1981, angered by the Egypt-Israel Peace Treaty.

1981-2011: Growing influence then repression during the Mubarak era: During Hosni Mubarak’s presidency, the Brotherhood remained officially banned. However, like Sadat, Mubarak needed an Islamist opposition strong enough to dampen secular opposition forces’ growth. The Brotherhood was alternately tolerated and repressed.

In the 80s the Brotherhood formed alliances with the Wafd, Labour and Liberal parties. It became the largest single opposition group. Brotherhood–linked independents ran in the 2005 elections, winning 88 seats—about 20 percent of the total. Mubarak, alarmed, imposed a crackdown, detaining hundreds of Brotherhood members and amending the constitution to prohibit parties with a religious foundation. However, Brotherhood-linked legislators participated in parliament more conscientiously than the ruling party’s legislators. They became a coherent opposition block, raising important issues (e.g. the Emergency Law that allowed indefinite detention without charges and gave security forces sweeping powers to suppress public gatherings.)[6]

Blatant rigging of the 2010 parliamentary elections sparked anger that morphed into the anti-Mubarak mass protests that began January 25, 2011. The Brotherhood, although not the initiator, eventually participated in them. Mubarak was ousted February 11, and his intelligence chief announced that the Supreme Council of the Armed Forces would govern until new elections.

2011-12: Electoral victories: After Mubarak’s toppling, the Brotherhood was finally legalized. It established a political wing, the “Freedom and Justice Party,” the main force in the Democratic Alliance block. The MB angered other parties by reneging on promises to not field too many candidates for the 2011-2012 elections. The FJP won 235 of the 488 seats and 37.5 percent of the popular vote. Al Nour, a hard-line Islamist party, won 123 seats and 27.8 percent. The New Wafd won 38 seats and 9.2 percent, and the Egyptian Block, a coalition of secular, liberal and left forces won 35 seats and 8.9 percent.

What is the Brotherhood’s current status?

Anti-Morsi demonstrations began shortly after he assumed office. Although large at their zenith in late June/early July 2013, they never matched 2011’s anti-Mubarak protests. The military, led by General Abdel Fattah el-Sisi, arrested Morsi and most of his cabinet July 3, and took over. Massive anti-coup demonstrations, led by the Brotherhood, ensued. The military began a violent crackdown on the Brotherhood and other opponents. Human Rights Watch reports that the military repeatedly opened fire on protesters, killing over 1150. Human Rights Watch (HRW) states that the killings “likely amounted to crimes against humanity … [and were]… grossly disproportionate and premeditated lethal attacks on overwhelmingly peaceful protesters.”[7] HRW reports that 22,000 have been arrested since July 3 2013, with widening use of torture and incommunicado detention.[8] A court issued a September 2013 injunction dissolving the Brotherhood and confiscating its assets.[9] In December 2013, the government accused the Brotherhood of bombing a police station. Although the Brotherhood denied involvement, and Al Qaeda claimed responsibility, the government designated the Brotherhood a “terrorist group.”[10] Patently unfair mass trials of detainees have resulted in mass death sentences for over a thousand.[11]General el-Sisi “won” evidently fraudulent May 2014 presidential elections, after warning “There will be nothing called the Muslim Brotherhood during my tenure.”[12]  Qatar initially gave haven to the Brotherhood’s exiled leaders, but came under pressure by the UAE. The Brotherhood leaders have now relocated to Turkey.[13] Morsi and his cabinet remain jailed, accused of treason.

[5] It is worth noting that Nasser and all of the other members of the first cell of the FOM had been members of the Brotherhood’s “secret apparatus” that carried out armed actions against British rule in 1945-56.

[7] “According to Plan: The Rab’a Massacre and Mass Killings of Protesters in Egypt," Human Rights Watch. August 2014.