CJPME Factsheet, published March 01, 2018: This factsheet addresses the ongoing debate between Israel and Palestine over Jerusalem. It explores both parties attachment to the city, as well as the International law on it. Finally, the factsheet addresses Trump’s recent decree and Canada’s position on the matter. 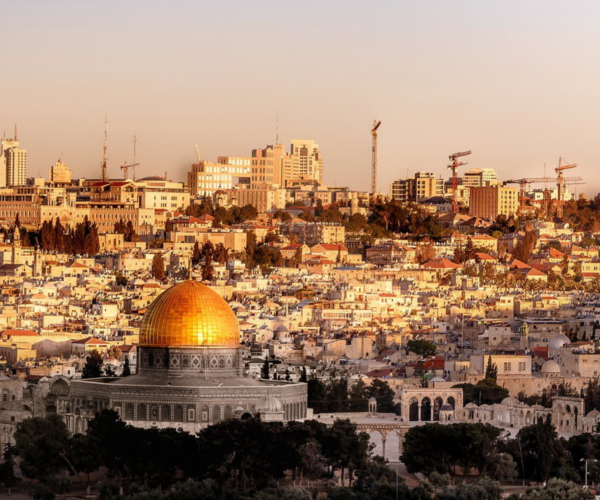 Who does Jerusalem belong to?

The city of Jerusalem is home to the Church of the Holy Sepulchre, the Al-Aqsa Mosque, and the Western Wall, which hold respective significance to Christians, Muslims, and Jews around the world. In 1947, UN Resolution 181 terminated the British Mandate over Palestine and introduced a partition plan to split Palestine into two states: one Arab and one Jewish. Resolution 181 also called for the joint administration of the city of Jerusalem as a separate body.[1] After the 1948 war, Jerusalem was divided into an Eastern side under Jordanian rule, and a Western side under Israeli control. Neither side was interested in carrying out the UN’s vision for a jointly-administered city. Twenty years later, in the June 1967 war, Israel seized control of East Jerusalem and illegally annexed it shortly afterwards – a move that was never recognized by the international community. After decades of Israeli annexation and illegal settlement expansion in Jerusalem, the status of the city has become a pressing issue, on which the UN has dedicated multiple resolutions to demand that international law be respected.[2]

The Palestinian attachment to Jerusalem. Palestinians have long considered Jerusalem as the capital of their future state, a principle affirmed by the Palestine Liberation Organisation in its 1988 Declaration of Palestinian Independence.[3] Jerusalem boasts two very prominent religious sites for Palestinians. The presence of the Al-Aqsa Mosque, one of the holiest sites in Islam, is of religious prominence to Muslims, whilst Christians revere the Church of the Holy Sepulchre, as it is the reputed site of Jesus’s crucifixion, burial, and resurrection. In the past, Israeli forces have been known to block access to the Al-Aqsa Mosque, or create barriers that make it very difficult for Palestinians to pray at the Mosque. Palestinians fear that loss of control over Jerusalem could lead to a complete loss of access to their religious sites. Palestinians do not have their own state, and live under a brutal Israeli military occupation. For Palestinians, losing access and control over Jerusalem would symbolise a defeat in both national and Islamic terms.

The Israeli attachment to Jerusalem.  Since its founding in 1948, Israel has sought to deepen control of Jerusalem. The city contains the remnants of the Second Jewish Temple, particularly the Western Wall, which has strong religious significance to Jews. Modern Zionism, in the late 19th century and the first half of the 20th century, revived the political attachment of Jews to Jerusalem and sought to establish a Jewish homeland in Palestine, with support from Great Britain.[4] As such, Jerusalem is central to the Zionist plan to establish and develop a Jewish state in Israel/Palestine.

What is the international law on Jerusalem?

As mentioned above, the UN’s partition plan called for the shared administration of Jerusalem. Following Israel’s 1967 announcement that it intended to annex East Jerusalem, the UN General Assembly reacted with the Resolution 2253 (1967), condemning Israel’s occupation and annexation.[6] The UN Charter prohibits the acquisition of a territory through military means. Despite this international condemnation, Israel declared the application of Israeli law in the city, and began colonising Palestinian areas of the city with Jewish “settlers”. Israel’s continued control over Palestinian living space and religious sites are an ongoing violation of Palestinians’ human rights and international law.

Following Israel’s attempts to formalise its illegal control over Jerusalem, the UN Security Council passed Resolution 478 (1980) condemning Israel’s new law and urging all UN member states to withdraw diplomatic missions from Jerusalem.[7] In 2004, the UN General Assembly Resolution 58/292 asserted the Palestinians’ right to sovereignty over East Jerusalem and the creation of a Palestinian state within the pre-1967 borders.[8]

According to B’Tselem, an Israeli human rights organization, Israel has built 15 illegal settlements in Israeli-annexed East Jerusalem since 1967. At the end of 2014, there were about 205,000 illegal Israeli settlers in East Jerusalem.[9]

Why does Trump’s Jerusalem decree matter?

On December 6th 2017, Donald Trump hosted a press conference to recognise Jerusalem as the capital of Israel, and announced his plan to relocate the United States embassy to Jerusalem. Trump’s decision confers a false legitimacy on Israel’s illegal activities in East Jerusalem and the occupied Palestinian territories. According to Donald Trump, previous administrations had delayed the recognition on purpose; but he argued that this recognition would pave a path towards a “lasting peace agreement”.[10] Critics of this move point out that Trump has rewarded Israel without demanding any concessions in return, despite Israel’s decades of violations of Palestinians’ human rights and international law.[11]

Trump’s decree reverses decades of American foreign policy on Israel-Palestine. US mediators to the conflict have long considered Jerusalem to be a “final status issue” that will only be resolved via a negotiated settlement. Trump’s move sends a signal to Israel that the US is indifferent to Israel’s human rights abuses against Palestinians, and that the Israelis are better off just “waiting it out” rather than making concessions in a negotiations process.

Moving forward, the US will have difficulty presenting itself as a neutral arbiter in any future peace negotiations. Ultimately, Trump’s unilateral pronouncement subverts international law, long-standing UN conventions, and negotiating logic on the status of Jerusalem.

The international community strongly opposed Trump’s statement on Jerusalem. On the 21st of December, 2017, the UN General Assembly voted in favour of the denunciation of Donald Trump’s recognition of Jerusalem as the capital of Israel.[12] The resolution reaffirmed the “inadmissibility of the acquisition of territory by force” and emphasised the “special status” of Jerusalem.[13] Key US allies, such as Germany, the United Kingdom, and France, did not hesitate to condemn Trump’s decision.[14] In particular, German Chancellor Angela Merkel retained her country’s support for the two-state solution, whilst the French President, Emmanuel Macron, stressed that Trump’s pronouncement contradicted international law.[15]

What is Canada’s position on Jerusalem?

For years, Canada has officially opposed to Israel’s occupation of Jerusalem and as well as its violations of international law.[16] However, in December 2017,  Canada chose to abstain from the UNGA vote condemning Donald Trump’s Jerusalem decree, stating, “We are disappointed that this resolution is one-sided and does not advance prospects for peace to which we aspire.”[17]  Yet rather than faulting the UN response, Canada would have been better off admonishing Trump’s misstep on Jerusalem, as that was far more “one-sided” and inimical to peace.

The Trudeau government has continued the practices of the Harper government in voting against an annual series of UN Resolutions in support of Palestinian people. In November 2017, Canada, along with the United States and five other countries, voted against an UNGA resolution condemning the Israeli annexation of Jerusalem.[18] As of January 2018, the Trudeau government has yet to condemn Israel’s actions in East Jerusalem.

In response to questions concerning Canada’s recent UN abstention on Trump’s Jerusalem decree, Justin Trudeau asserted that using the United Nations to push for sanctions against Israel was not “productive in international relations”.[19]  Nevertheless, most of Canada’s allies, including the UK, Germany, France and Japan, voted in favour of the UNGA condemnation of Trump’s decree, presumably considering such a vote to be “productive.”  In fact, international law – including UN resolutions – gives the international community a solid basis for condemnation of rogue nations.  If Canada chooses to ignore violations of international law and legal precedent, Canada fails to use the most important leverage it has to encourage a just and peaceful settlement to the Israel-Palestine conflict.

[1] “Future Government of Palestine: UN General Assembly Resolution 181, adopted on the report of the ad hoc committee on the Palestinian question.” Voted November 29, 1947.

[2] “The Status of Jerusalem,” in The Question of Palestine and the United Nations. UN Department of Public Information. 2003.

[9] “Statistics on Settlements and Settler Population.” B’Tselem: The Israeli Information Center for Human Rights in the Occupied Territories. Updated May 11, 2017.