CJPME Factsheet No. 216, published December, 2019: This factsheet provides a summary analysis of the Kurds of the Middle East, explaining who they are as a people and outlining their diverse visions for their political future.

The Kurds of the Middle East

Factsheet Series No. 216, created: December 2019,, Canadians for Justice and Peace in the Middle East
View factsheet in PDF format 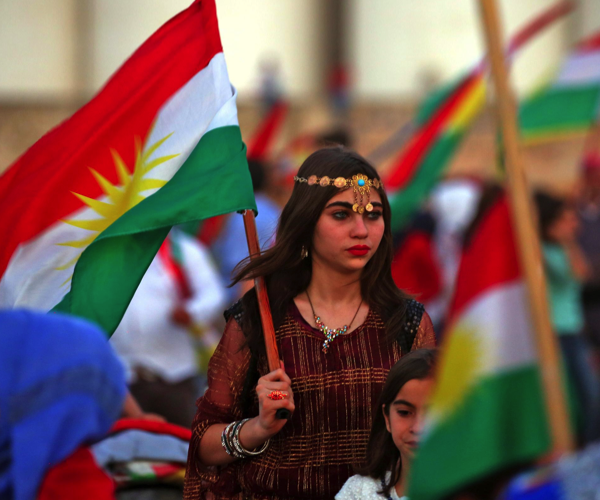 Who are the Kurds?

The Kurds are one of the indigenous people who had lived for centuries in the historical region of Mesopotamia, situated in Western Asia. Throughout the 20th century, the Kurds continued their traditionally nomadic lifestyle, herding throughout the plains and highlands of Mesopotamia.[1] Nowadays, the population is divided across four dominant countries: Turkey, Iraq, Syria and Iran. Despite being spread out amongst these respective countries, Kurds have maintained and unified cultural identity and have established prominent societies. Indeed, the Kurds have a unique language and culture that clearly distinguish them from their Arab, Turkish and Persian neighbours. [2] Despite their shared culture, the Kurdish population has various tribal identities, diverse political interests and different religious beliefs. [3] While most Kurds adhere to Sunni Islam, other religions are practiced as well, among Kurdish Shi’a Muslim, Christian, Jewish and Yezidi communities. [4] The spoken language is primarily Kurdish, historically belonging to the Indo-Iranian branch of the Indo-European language family. [5]  Kurds speak different dialects. About 75% of native Kurdish speakers speak Kurmanji or Sorani and other dialects like Pehlewani, Dimili/Zaza, Hewrami/Gorani are spoken as well.[6] The Kurds are the fourth-largest ethnic group in the Middle East[7] and, to this day, are considered to be one of the largest non-state nations in the world.[8]

Where do they live?

Why don’t they have a state?

Early Kurdish nationalism first emerged in the 19th century, finding its roots in the days of the Ottoman Empire. Although, the 20th century, is the key period of the rise of Kurdish nationalism, where several Kurds began to reflect on the creation of a homeland called “Kurdistan”.  After World War I and the defeat of the Ottoman Empire, the victorious Western allies (UK, France, Italy, Japan and others) made provisions for an independent Kurdish state, to be known as Kurdistan, in the Treaty of Sèvres (1920), codified in its Article 64. [14] Despite the promises in this Treaty, the Treaty of Lausanne, which came into effect three years later, ultimately abrogated the Treaty of Sèvres, setting the boundaries of the modern Republic of Turkey and made no provision for an independent Kurdish state. Instead, the Kurdish nation was split in four different countries: Iraq, Iran, Turkey and Syria. The Treaty left the Kurds with minority status in their respective countries.[15] Whereas the Kurds for centuries had been nomadic peoples, these geopolitical changes divided the population, confining them to nation-state borders and forcing them to settle.[16] They have been enduring varying degrees of political, ethnic, linguistic and cultural discrimination[17] from host countries ever since.  Kurdish nationalism emerged, fighting to set up an independent state but all plans have failed over the years. Home states, which are generally pushing their own nationalist agenda, have tried to supress Kurdish identity. [18]

What do the Kurds want?

Throughout modern history, many of the Kurds have aspired and struggled to obtain their self-determination in a sovereign state and have suffered oppression and violence from host governments. Despite the quest for the independence being an integral part of the Kurdish identity, not all Kurds are unified. Indeed, since the Kurds and their politics have been shaped by the politics of host countries, most Kurdish movements and political parties tend to focus on the realities of their specific contexts. Likewise, their aspirations may differ depending on each respective contexts, with some Kurds advocating for greater cultural freedoms and political recognition rather than self-determination per se. For example, many Kurds who have migrated to urban centers, such as Istanbul, Damascus and Tehran have generally been content to integrate and assimilate into the dominant society.[19]

In Iraq, Kurds have a unique situation that they have nowhere else: territory where they have established an autonomous Kurdish region, governed by the Kurdistan Regional Government (KRG), which is recognized under the Iraqi Constitution.[20] Despite already having a degree of semi-autonomous, Iraqi Kurds have separatist aspirations and aim to separate from Iraq and transform the KRG into an independent state. On September 25th, 2017, an independence referendum was held in the region, with the majority of Iraqi Kurds voting in support of independence.[21] Kurds in Turkey have faced a long history of discrimination and violence. Turkey continues, to this day, its policy of not recognizing the Kurds as a minority group, Turkish Parliament even banning the use of word “Kurdistan” in Parliament.[22] – In Turkey and Syria, facing discrimination against their community and repression of their political and cultural rights[23], Kurdish people seek semi-autonomous region and greater cultural and political rights in their specific countries rather than separation. In Syria, even before the US joined the fight on ISIS, Kurdish forces had been playing an essential role in the fight against the Islamic State.  Unlike other Kurdish regions, there are very strong ethno-linguistical, historical and cultural bonds between Kurds and Iranian peoples.[24] For instance, the majority of Kurds celebrate “Newroz” which is the Kurdish celebration of the traditional Iranian people’s New Year holiday “Nowruz”. Kurds are not asking for secession from Iran. They seek, like Kurds from other countries, recognition of their distinct identity, the end of discriminatory and repressive policies and autonomy in their own region. [25]

In light of the US’ 2019 decision to withdraw forces from Northern Syria in anticipation of Turkish attack [26] and after centuries of enduring betrayal, repressive policies and violence, the popular saying that Kurds have “no friends but the mountains”29 still resonates to this day.

[26] MacDonald, Alex. “No Friend but the Mountains: History repeats itself with latest US betrayal of Kurds.” Middle East Eye. October 07, 2019.