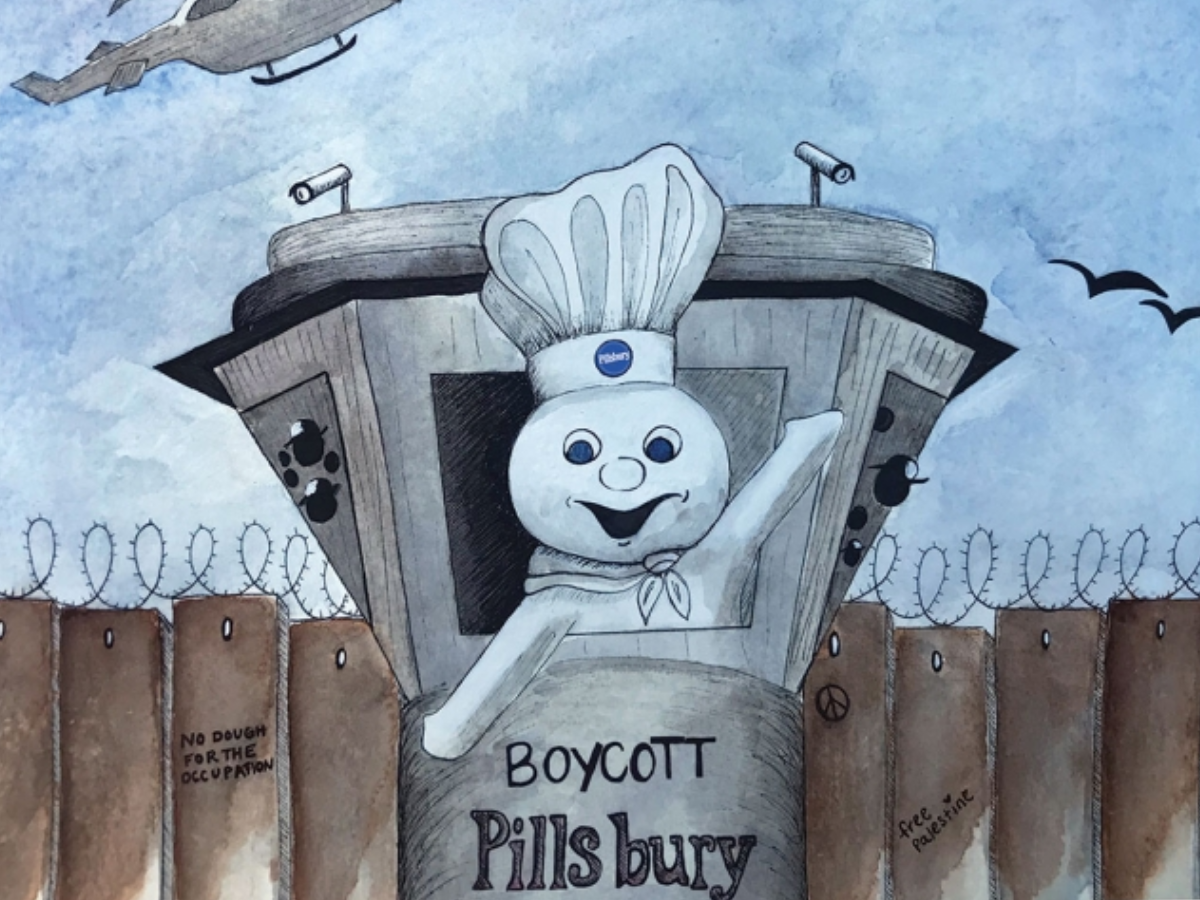 From 2002 to 2022, General Mills had been manufacturing Pillsbury products in a factory located in an illegal Israeli settlement in occupied Palestinian territory.

After a two-year boycott campaign by activists, General Mills announced in May 2022 that it was fully divesting from its Israeli business and that none of its products would be produced in the settlement factory going forward.[1]

How was Pillsbury involved in Israel’s settlements?

For twenty years, Pillsbury had been operating a factory in the Atarot Industrial Zone, an illegal Israeli settlement in East Jerusalem which was occupied by Israel in 1967 and unilaterally annexed in 1980.[2]

What’s wrong with companies being in the settlements?

All Israeli settlements in occupied Palestinian territory are illegal under international law, as the Fourth Geneva Convention prohibits an occupying power from transferring its civilians into occupied territory. This was reaffirmed by UN Security Council Resolution 2334, which clearly states that “that the establishment by Israel of settlements in the Palestinian territory occupied since 1967, including East Jerusalem, has no legal validity and constitutes a flagrant violation under international law.”[5]

Moreover, Israeli settlements amount to the theft and exploitation of Palestinian land, resources, and labour, and businesses profiting from economic activity in these settlements are complicit in these crimes.[6] The United Nations Human Rights Council has called upon businesses to comply with international law and “avoid contributing to the establishment or maintenance of Israeli settlements or the exploitation of natural resources of the Occupied Palestinian Territories.”[7]

Specifically, the Atarot Industrial Zone, where Pillsbury’s factory was based, has had “devastating consequences” on the Palestinians living in East Jerusalem, according to a report by Palestinian NGO Al-Haq.[8]  The report notes that the Pillsbury factory itself “directly and adversely impacts the lives of Palestinian residents who live in close proximity to the factory,” quoting a resident who said that the flour used in the factory frequently spills into his house, and a family who suffers from “trash from the factory which is left in open air” near their home.[9] The report concludes that Atarot is “constructed on layers of human rights abuses,” and that it disregards the Palestinian residents who live in the area and imposes “unacceptable living conditions.”[10]

What was the campaign against Pillsbury?

“No Dough for the Occupation” was a two-year campaign led by the American Friends Service Committee (AFSC) – a Quaker organization – calling on consumers to boycott Pillsbury products until General Mills stopped producing them in Israeli settlements on occupied Palestinian land.[11]

In Canada, CJPME distributed over 900 stacks of “Boycott Pillsbury” sticky notes to supporters across the country, which Canadians could apply to Pillsbury products on store shelves.[12]

The campaign was supported by the Palestinian BDS National Committee, Jewish Voice for Peace, American Muslims for Palestine, and, many other US groups. The campaign included petitions, protests, shareholder activism, and other public pressure strategies.[13]

The boycott was even supported by five members of the Pillsbury family, who wrote an op-ed promising that “As long as General Mills continues to profit from the dispossession and suffering of the Palestinian people, we will not buy any Pillsbury products.”[14]

Did Pillsbury divest from Israel because of the boycott campaign?

As is typical in these situations, the statement from General Mills statement does not reference the boycott campaign and claims that the decision was about “strategic choices about where to prioritize our resources to drive superior returns.”[15] This is not unusual. Most companies that change their business practices following boycott campaigns deny that activist pressures played any role in their decisions.[16] Nonetheless, as the AFSC says, “General Mills’ divestment shows that public pressure works even on the largest of corporations.”[17]

Is it okay to purchase Pillsbury now?

[14] Charlie Pillsbury on behalf of four other family members, “Why we must boycott Pillsbury,” StarTribune (Minnesota), April 28, 2021.

[15] Arria, "Why the ‘Boycott Pillsbury’ campaign was a BDS victory."

[16] Arria, "Why the ‘Boycott Pillsbury’ campaign was a BDS victory."