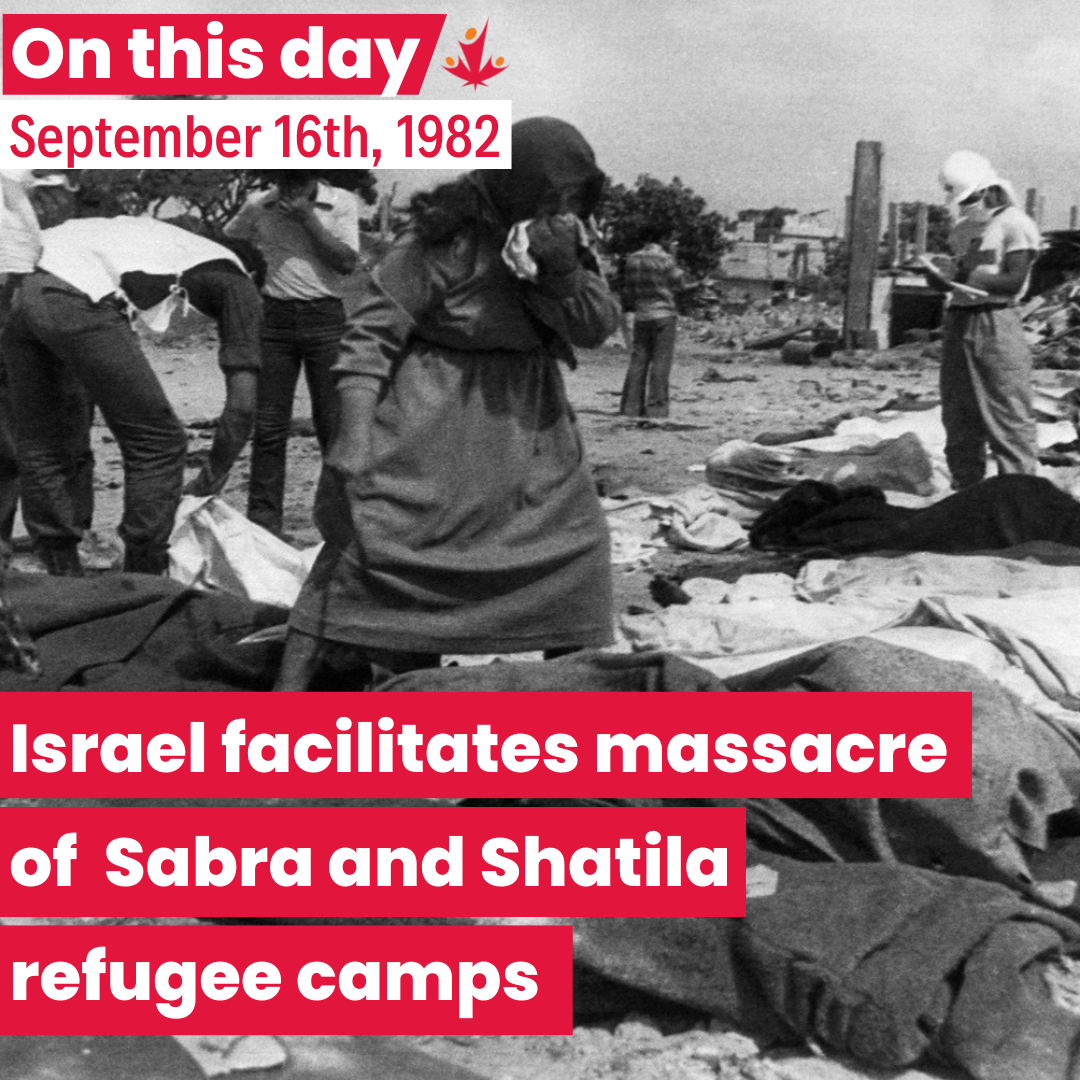 On this day in 1982, Israel facilitated a massacre of the Sabra and Shatila refugee camps in Beirut, Lebanon, killing more than 3,500 Palestinian and Lebanese people, including children, women and men, in a three-day period. Although the violence was directly committed by right-wing Lebanese Phalangist militias, invading Israeli forces played a key role in the massacre. Israel had completely surrounded the refugee camps, preventing anyone from escaping, and allowed their Lebanese militia allies into the camp “under the protection and supervision of Israeli forces.” Israel had re-invaded West Beirut following the assassination of Lebanon’s President Bashir Gemayel on September 14, 1982.

“They broke down front doors and wiped-out entire families eating dinner. Some families were murdered in bed, still wearing their pajamas. In many homes, children, three or four years old, were found in their pajamas, and blood-soaked blankets.... in many cases, the attackers dismembered their victims before killing them. They crushed the heads of children and babies against walls. Women and girls were raped before they were slaughtered with hatchets. Often, men were dragged out of their homes to be quickly and collectively executed in the street with hatchets and knives. The militants spread terror as they indiscriminately slaughtered men, women, children, and the elderly.”

The Israeli government denied any knowledge of the massacre and an Israeli commission in 1983 claimed that Israel was only “indirectly responsible.” However, there is significant evidence that Israel was fully aware of the violence but continued to provide support to the militias, including by preventing people from leaving, and by using flares to illuminate the camps at night. Israeli prime minister Menachem Begin himself stated that they were receiving information from inside the camps at the height of the massacre, saying that, “Many terrorists have remained there with their weapons, and we have ascertained this in the last two nights.” Minister of Defense Ariel Sharon explained that while the IDF was “forbidden to enter the refugee camps, the 'mopping-up' of the camps will be carried out by the Phalanges or the Lebanese army.” Israel’s commission found Sharon “personally responsible for ignoring the danger of bloodshed and revenge,” leading to his dismissal, but he was later elected Prime Minister in 2001.

Québec MP Yvone Charbonneau spoke about Israel’s atrocities during a Parliament debate on Israeli violence during the Second Intifada in 2002: “The Sabra and Shatila massacres under Sharon, all these illegal and criminal violent acts have they brought peace and security to Israel? The answer is no. We can rest assured that the terror campaign waged by Israel right now against scores of Palestinian town will not secure peace and security. On the contrary, Sharon and his army are sowing more hatred and determination among their victims.”

Interactive Encyclopedia On the Palestine Question - "Sabra and Shatila "