Trudeau gov’t unable to follow through on anti-BDS motion? 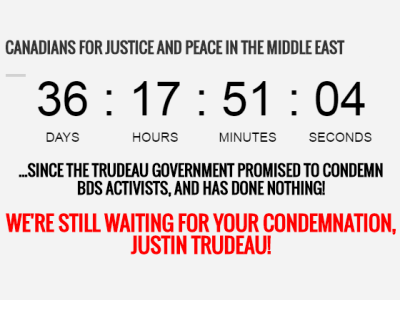 Montreal, March 31, 2016  — It has been over five weeks since the majority Liberal government of Justin Trudeau committed itself to condemning all Canadian groups and individuals who promote the boycott of Israel (i.e. BDS)[i] in Canada.  Canadians for Justice and Peace in the Middle East (CJPME) points out that, despite the lip service that Liberal leaders gave in support of the motion at the time, government leaders have not yet condemned a single Canadian group or individual for BDS.  CJPME leaders conclude that this is either because: 1) the Liberal government is not convinced of the merits of the motion, or 2) the Liberal government is concerned that the motion contradictsCanada’s Charter of Rights and Freedoms.

CJPME also questions whether the Conservative sponsors of the motion actually give credence to the motion, as they have likewise failed to hold the government accountable in the fulfillment of the intents of the motion.

As early as Feb. 23rd – one day after the passage of the motion – Woodley challenged the Trudeau government to condemn him and his organization.  “I’ve realized that being condemned by Canada’s government, merely for supporting the human rights of Palestinians, might be the most admirable thing I’ll accomplish in my life,” wrote Woodley in a letter to the government.  Nevertheless, in the five weeks since, the government has responded neither with an answer nor a condemnation.  CJPME is one of the lead Canadian groups actively promoting BDS, and does so to encourage Israel to respect the human rights of Palestinians. [viii]

Given the government’s unwillingness to follow through on the motion, CJPME has concluded that the motion was just a bit of political theatre, intended to score some political points at the expense of Canadians’ Charter rights.  In his letter to Trudeau and Dion, Woodley concluded, “If you’re not going to carry out the condemnations, then show some spine and renounce the anti-BDS motion.  If you do neither, then you prove that the goal of the motion was simply to score a few political points, at the expense of our right to free speech.”


[i] The boycott of Israel is a generic way of referring to the international BDS (Boycott, Divestment and Sanctions) campaign that was launched in 2005 by Palestinian civil society.  The movement calls for economic pressure to be applied on Israel until 1) Israel ends its military occupation of Palestinian territories, 2) Israel accords equal rights for Palestinian citizens of Israel, and 3) there is a settlement of the Palestinian refugee question in accordance with international law and UN resolution 194.

[ii] PM Justin Trudeau, leader of the government, is ultimately responsible for the passage of the motion.

[iii] Foreign Affairs Minister Stéphane Dion represented the Liberal government during the debate on the motion.

[iv] Tony Clement was the Conservative sponsor of the motion.

[v] Michelle Rempel has been described as a co-author of the motion, and frequently defended the motion on behalf of the Conservative Party.

[vi] Thomas Mulcair, who opposed the motion on the grounds of the Charter right to freedom of expression is NDP leader, the former opposition leader.

[viii] The stated goals of the BDS movement, as found on the movement’s Website http://bdsmovement.net, are, “1) Ending [Israel’s] occupation and colonization of all Arab lands and dismantling the Wall, 2) Recognizing the fundamental rights of the Arab-Palestinian citizens of Israel to full equality, and 3) Respecting, protecting and promoting the rights of Palestinian refugees to return to their homes and properties as stipulated in UN resolution 194.”  Each point lines up almost identically with Canada’s own positions as documented on the government’s Global Affairs Website.