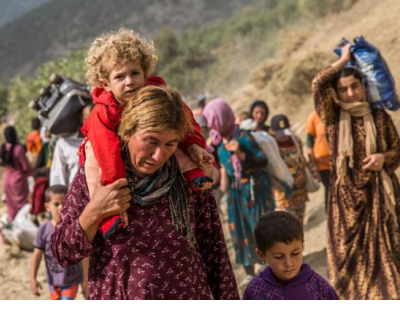 Montreal, November 1, 2016  — Canadians for Justice and Peace in the Middle East (CJPME) applauds two recent bi-partisan motions in Parliament.  First, CJPME was happy to see the bi-partisan call for immediate help to Yazidi refugees, especially women and girls.  Second, CJPME was pleased to see the unanimous consent for an anti-Islamophobia motion.  “Both motions reflect critical maturing in Canada’s thinking on the Middle East and its peoples,” declared Thomas Woodley, President of CJPME.  “If Canadian leaders can set aside racial stereotypes and partisan politics to intervene in a humanitarian and inclusive way, then we’ve made progress,” added Woodley.

The motion of Oct. 25 supporting help for Yazidi refugees includes a number of steps, most importantly the prioritization of asylum for Yazidi women and girls. Yazidis are considered an ethnically Kurdish religious community, most of whose members live in northern Iraq. Their religion incorporates elements of Zoroastrianism, Islam, Christianity and Judaism, which consequently made them a target for genocide by ISIS. CJPME has long advocated Canadian support for Syrian and Iraqi refugees, and is happy to see the government adopt an additional mandate to help the Yazidi people of the region.

The motion one day later to condemn all forms of Islamophobia was also an important step for Canada’s parliament. The same motion had failed to achieve unanimous consent on Oct. 6 when certain Conservative MPs objected. CJPME believes NDP leader Thomas Mulcair was justified in questioning the motives of the dissenters. “I can’t see how anybody can speak out against a motion that seeks to condemn a form of hatred.” CJPME has long observed that news from the Middle East muddles and distorts perceptions in Canada, and vice versa. CJPME applauds this clear condemnation of all discrimination against Canadian Muslims, and encourages parliamentarians to disavow “identity politics.”

CJPME looks forward to concrete commitments on both these files in the coming months. “Canada and the world are facing many challenges,” concluded Woodley, “and Canadians – especially our leaders – will have to put aside petty differences if we have any hope of constructively addressing these challenges.”