CJPME Factsheet 57, published March, 2009: This factsheet looks at the challenges that lie ahead should Avigdor Lieberman become Israel’s Foreign Minister. After receiving 15% of seats in the Israeli Parliament (Knesset) in the 2009 general elections, the Yisrael Beitenu party poses a grave threat to the Israeli/Palestinian peace process and to the rights of Arab citizens of Israel. Beiteinu’s platform is one of ultra-right-wing ethnic nationalism, whose tenets relating to citizenship, military service and land allocation can accurately be described as fascist.

The Challenge of Avigdor Lieberman and Yisrael Beiteinu

Factsheet Series No. 057, created: March 2009, Canadians for Justice and Peace in the Middle East
View factsheet in PDF format 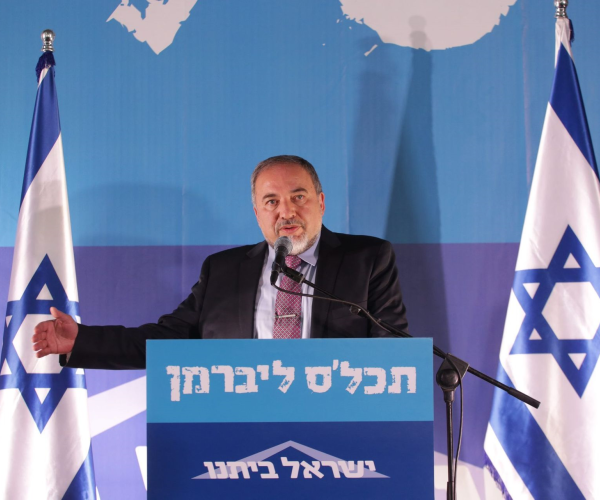 The February 2009 general elections saw Yisrael Beitenu receive 15 seats in the Israeli Parliament (Knesset), amounting to roughly 11% of the popular vote.  As a result of coalition bargaining, Avigdor Lieberman, leader of the party, will likely assume the role of Foreign Minister of Israel.  His appointment will present a dilemma for Canadian policy makers who may be encouraged by their political duties or constituencies to interact with him.  Elected leaders and public servants, however, are bound by Canadian laws and treaty obligations and required to temper their relations with representatives of other states accordingly.

Yisrael Beiteinu’s ideological commitments are beyond the pale of the Canadian political spectrum.  Not only does Mr. Lieberman pose a grave threat to the Israeli/Palestinian peace process and to the rights of Arab citizens of Israel, but his views are anathema to the very nature of the Canadian project of a bi-national, inclusive, multi-cultural, and rights-based society.

What is the Yisrael Beiteinu Party?

Founded in 1999 by Avigdor Lieberman, Yisrael Beiteinu (hereafter Beiteinu) is translated as Israel is our Home.  When said in Hebrew, the emphasis is placed on the ‘our’ - the connotation of which is understood in negative relation to ethnic Arab citizens of Israel.  The party’s base is predominantly comprised of immigrants from Russia and ex-Soviet states; roughly one million of which immigrated to Israel in the early 1990s.

Beiteinu’s platform, “to actualize the Zionist vision of a Jewish State for the Jewish People” is one of ultra-right wing ethnic nationalism,[i] whose tenets relating to citizenship, military service and land allocation can accurately be described as fascist.  The party advocates enacting loyalty oaths to be sworn to the state as a Jewish state and its symbols (i.e. the Israeli flag and the national anthem espousing the uniquely Jewish character of the land), to military service, or another form of service (likely for ultra-Orthodox Jews currently exempt from service).  It advocates stripping citizenship rights from those not willing to swear fealty.[ii]

What is Avigdor Lieberman’s political record?

Lieberman immigrated to Israel in 1978.  For a time, he belonged to the Kahane LaKnesset (Kach) party.[iii]  Kach adopted the radical, messianic ideology of Rabbai Meir Kahane, who advocated the ethnic cleansing of Israel and Palestine of all Arabs and their expulsion to Jordan.[iv]  In 1988, Kach was banned under the 1985 revision of the “Knesset Election Law”;[v] a ban subsequently upheld by the Israeli Supreme Court.[vi] The party split into political and militant offshoots.  One of which, Kahane Chai, is listed as a terrorist organization by Public Safety Canada, describing it as:  “a right-wing, anti-Arab, terrorist group whose overall aim is to restore the biblical state of Israel.”[vii]

Mr. Lieberman served as Director General of the Likud party from 1993 to 1998.  In 1999 he left to form Beiteinu and was first elected to the Knesset.  He has variously served as the Minister of Transportation, Minister of National Infrastructure, and Minister of Strategic Affairs.  Beiteinu quit the governing coalition in 2008 over peace talks with the Palestinian Authority.  On January 28th, 2009 the Israeli Attorney General announced investigations into Mr. Lieberman on “serious suspicion” of bribery, money laundering and falsifying corporate documents.[viii]  He currently lives in the illegal West Bank settlement of Nokdim, south of Bethlehem.

Yes. Arabs represent 20 percent of the citizenry of Israel and are predominantly clustered in three geographic areas contiguous with the West Bank: southern and central Galilee, the northern part of the NegevDesert, and a region known as “the triangle” on the North-West tip of the West Bank.[ix]  The so-called Lieberman Plan of 2004 calls for an exchange of these territories for areas illegally occupied by Israeli settlers.  This would strip ethnic Arab Israelis of their citizenship, annex land, and violate UN Resolution 242 calling for the restoration of pre-1967 borders.  In 2004, Lieberman told the Knesset he is “definitely speaking of exchanging populations and territory simultaneously, because there is no other solution”.[x]

Lieberman’s plan rests on his conviction that two ethnic, linguistic or religious communities in conflict cannot co-exist peacefully within the same state.  The party’s website states: “the only possible solution is the exchange of territory and populations, with the goal of the separation of the Jewish and Arab nations, respectively. Only this solution can guarantee the Jewish character of the State, assure a clear Jewish majority in the short and long term, safeguard the security of our citizens, and encourage economic growth.”  It further states that, “Israel must insist that a final agreement with the Palestinians should ensure that the vast majority of those who call themselves ‘Arab-Palestinians in Israel’ find themselves excluded from the State of Israel and reunited [sic] with their nation.”[xi]

Does Yisrael Beiteinu support a two-state solution for Israel and Palestine?

Yes and no.  In 2004 Mr. Lieberman abandoned his opposition to Palestinian independence and now supports the existence of a Palestinian state - albeit an unviable, non-contiguous state whose borders violate international law.  Beiteinu’s Palestine is based neither on justice nor self-determination, but on establishing an ethnically homogenous Israel.  Mr. Lieberman labels Gaza a ‘hostile entity’ and advocates for its perpetual isolation from both Israel and the West Bank; in essence formalizing collective punishment of Gaza’s civilian population.  All of these positions are openly espoused on the Beiteinu website: http://beytenu.org/.

Beiteinu is against all recent manifestations of peace talks, stating: “attempts to simultaneously achieve peace and security have failed, revealing themselves as false hopes that lead only to disappointment.”[xii]  Beiteinu dismisses dialogue with President Abbas, declaring: “Israel will not regard Abbas as a partner for negotiations and will wait for a new leader who can ‘deliver the goods’”[xiii]  Mr. Lieberman’s appointment as Foreign Minister, responsible for negotiations, will represent the end of peace talks on any grounds of parity or justice.

How do Beiteinu’s platform and Mr. Lieberman’s personal statements relate to the Canadian and international laws of human rights, citizenship and nationality?

[iv] Meir Kahane’s lectures and books are often banned or out of print.  For the most blatant of his arguments please see They Must Go, or any of his other writings on Arab citizens of Israel at http://www.kahanebooks.com

[v] The Basic Law: The Knesset (Amendment No. 9) section 7A regarding the "Prevention of participation of candidates' list” on the grounds of subsection (3) regarding “incitement to racism."

[vi] The Israeli Supreme Court has repeatedly and consistently overturned Election Committee bans on Arab lists such as Ta’al and Balad.

[vii] “[…] its activities include armed violence, bombing, disturbing public speeches, engaging in physical confrontations with law enforcement officials, and threatening Israeli government officials.” http://www.publicsafety.gc.ca/prg/ns/le/cle-en.asp#KACH (Kach was listed as a terrorist organization on May, 2005, and reviewed November, 2008).