Factsheet Series No. 062, created: April 2009, Canadians for Justice and Peace in the Middle East
View factsheet in PDF format 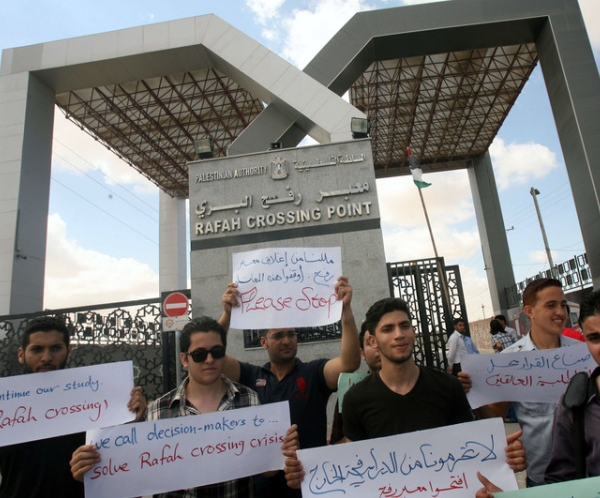 Gaza has been occupied by Israel since 1967. From 1967 until September, 2005, Israel declared Gaza a closed military zone, and required that any Palestinian wanting to leave Gaza had to obtain permission from Israel. Although Israel withdrew its illegal Jewish colonists and its permanent military presence from the Gaza Strip in 2005, it is still considered the occupying power both under The Hague Regulations and the Fourth Geneva Convention because it retains effective control over Gaza and frequently intervenes militarily.[i] While Israel has imposed a cripping blockade on Gaza since 2007, Egypt has also played a crucial role in maintaining the siege by closing its own border with Gaza.  This crossing – the Rafah crossing – is the only entry point Gaza shares with a state other than Israel.

How did the Rafah crossing come into being and what are the issues?

In 1979, President of Egypt Anwar Sadat and Israeli Prime Minister Menachem Begin signed a peace treaty. The city of Rafah was divided by the treaty, placing the more densely populated area in the Israeli-occupied Gaza Strip. In 1982, as Israel was withdrawing from the Egyptian Sinai, Defence Minister Ariel Sharon reportedly asked that the border delineation be changed so that all of Rafah be included on the Israeli side but Egypt refused. The partition of Rafah led divided families to construct the first underground tunnels as a means of communication. The economic incentive of the tunnels soon resulted in smuggling as subsidized Egyptian gasoline could be sold at a profit in Gaza. Other black-market items included “U.S. dollars for money changers, wedding dowries, mail, cartons of cigarettes, drugs (marijuana and heroin), gold, and spare car parts.”[ii]

Beginning with the First Intifada, or Palestinian uprising (1987), Israel became preoccupied with the smuggling of weapons and fighters through the tunnels. Israeli military operations against smuggling drew international criticism because of the loss of civilian life and destruction of homes these operations engendered. When Israel withdrew its colonies and military from Gaza in 2005, Israel and Egypt negotiated a security agreement, and Egypt deployed 750 border guards to the area (the agreement with Israel puts strict limitations on the number of troops and the kind of equipment Egypt can deploy to its side of the border.)[iii]

What is Egypt’s role in keeping the border closed?

After nearly forty years of Israeli control, in 2005, the border was theoretically handed over to the Palestinians under European Union supervision. All goods and trade between Egypt and Gaza still had to go through the Israeli-controlled Kerem Shalom checkpoint; EU monitors could detain individuals at Rafah and Israel monitored the Rafah crossing via video linkup.[iv] After the 2006 attack on the Kerem Shalom crossing and the kidnapping of Gilad Shalit, Israel ordered the crossing closed 86% of the time.[v] After Hamas took over the Gaza strip in June, 2007 to pre-empt a CIA backed Fatah coup against it[vi] (Hamas won the 2006 legislative elections), Egypt cooperated with Israel in keeping the crossing closed.

Since then, the crossing has almost always remained closed.  (The one notable exception to this closure was the January 2008 Egypt-Gaza border breach when Palestinian militants broke down part of the border wall and hundreds of thousands of desperate Palestinians poured into Egypt for a few days to buy direly needed supplies.[vii])  Egypt has made some exceptions, and allowed some Palestinians in need of urgent medical attention and some traveling to Mecca for Haj to exit through the Rafah crossing. Nevertheless, Egypt still very much sustains the siege of Gaza by refusing to open the border fully. This intransigence had dire consequences during Israel’s December 2008-January 2009 War on Gaza. During the war, paramedics and hospitals struggled to cope with very little medical supplies and frequent power cuts. Convoys of humanitarian aid and doctors from around the world lined up at the Egyptian side of the border, and despite the severity of the situation Egypt maintained access to Gaza tightly restricted.

Why is Egypt keeping the border closed?

Many people around the world see Egypt as complicit in the siege of Gaza for its collaboration with the Israeli-led blockade of the Strip. Egypt’s participation in the economic strangulation of the civilian population of Gaza is neither morally nor legally tenable, yet there are several other factors at play.

The border and the question of arms smuggling have long been a source of tension between Israel and Egypt. Israel has accused Egypt of not doing enough to stop the smuggling of arms or of even being complicit in it, while Egypt has complained that its 2005 Memorandum of Understanding with Israel puts too many restrictions of Egypt’s resources and manpower to effectively patrol the border.[viii] The 2005 Agreement on Movement and Access regulating the operation of the Rafah crossing, stipulates that European monitors have to be at the crossing, that Israel can supervise the crossing via closed circuit camera and data systems, and that the Palestinian Authority runs the Palestinian side of the border. Since Hamas took over Gaza, Israel has put pressure on Egypt to maintain the border completely closed. The President of the Palestinian Authority, Mahmoud Abbas, of Fatah, has also put pressure on Egypt not to open the crossing as this would undermine Fatah’s position and strengthen Hamas.[ix] Egyptian President Hosni Mubarak has said he would not open the border until the authority of the President of the Palestinian Authority (Fatah) is restored to Gaza.[x] Mubarak is also determined to isolate Hamas and to keep its influence out of Egypt where he has worked hard to suppress the Muslim Brotherhood, of which Hamas is an offshoot.

Egypt is also under pressure from the Americans to keep the border closed and to put a halt to smuggling. Israel and Egypt are the two biggest recipients of US Foreign Military Financing (congressionally appropriated grants given to governments to finance the purchase of American weapons.) Israel has demanded “that the United States condition its annual $1.3 billion in military assistance [to Egypt] on Egypt’s efforts to thwart smuggling.”[xi] Section 690 of P.L. 110-161, the Consolidated Appropriations Act, 2008, makes $100 million dollars conditional on, amongst other things, Egypt’s efforts to detect and destroy smuggling tunnels.

Therefore,Egypt’s closure of the border is in large part due to outside pressure fromAmerica,Israel and Fatah, and the desire to contain the influence of Islamist groups domestically.

[v] “The Agreement on Movement and Access one year on.” UN Office for the Coordination of Humanitarian Affairs. November, 2006. http://www.ochaopt.org/documents/AMA_One_Year_On_Nov06_final.pdf