CJPME Factsheet 144, published March, 2012: This factsheet provide context and background for an exhibition which CJPME tours entitled, “A Child's View from Gaza: An exhibition of children’s drawings from Gaza.”  The inspiration behind the exhibition, as well as the mechanics of the bringing together of the exhbition are described.

A Child's View from Gaza

Factsheet Series No. 144, created: March 2012, Canadians for Justice and Peace in the Middle East
View factsheet in PDF format

What is 'A Child's View from Gaza'? 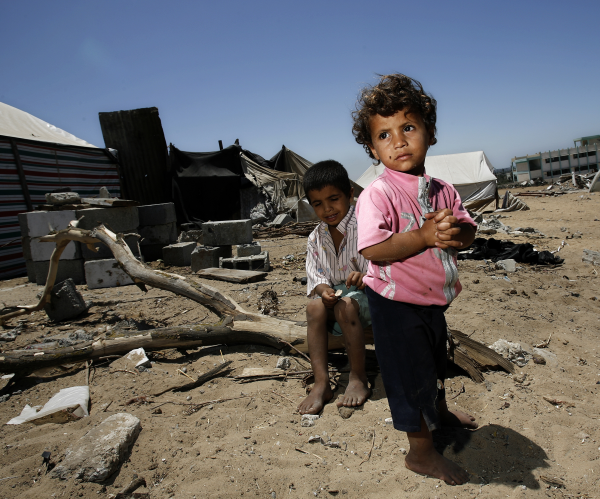 'A Child's View from Gaza' (ACVG) is an exhibit of 26 drawings brought together by Susan Johnson, a Philadelphia-area activist for Palestinian rights. Susan first became interested in Palestinian human rights after visiting the West Bank in 2004 with a group called “Women of a Certain Age.” The group participated in non-violent demonstrations in villages in coordination with the International Solidarity Movement, a Palestinian-led movement committed to resisting Israeli apartheid in Palestine.

Following Israel’s twenty-two day military assault on Gaza during ‘Operation Cast Lead,’ which began on Dec. 27 2008, Susan traveled with a delegation of 13 American activists of all different faiths to Gaza in May 2009. Due to the blockade of goods and persons travelling to and from Gaza, it was necessary that they travel with a letter of invitation they obtained from the United Nations Relief and Works Agency (UNRWA). The delegation’s main interest was to witness the destruction caused by the 22-day assault on Gaza the impact of 'Operation Cast Lead' on children's lives. 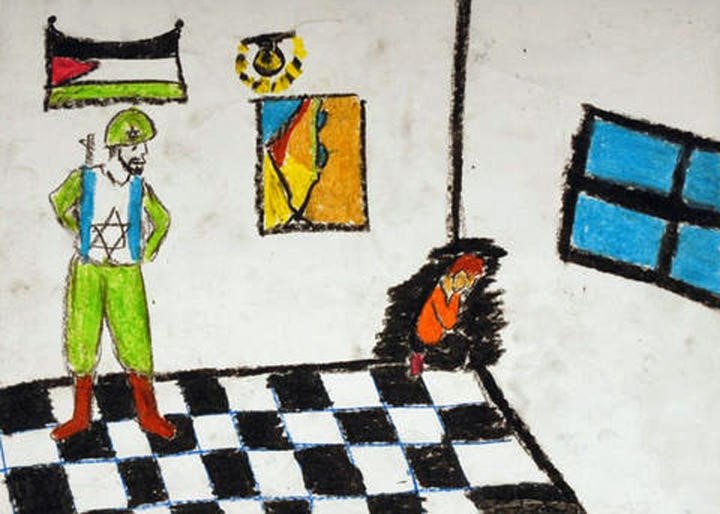 Throughout the trip the delegation visited hospitals, refugee camps and schools. After a heart-wrenching visit to a children’s art therapy class and seeing the artwork that the children had created, the delegation thought that an art exhibit of children’s drawings from Gaza would be an ideal way to promote public awareness of Gaza’s plight. Susan spear-headed the project upon her return to the USA, and with the help of Middle East Children’s Alliance (MECA), an NGO based in San Francisco, she approached centres in Gaza with her project mission.

For Ms. Johnson, the ACVG should help people see what the children of Gaza have through during Israel’s 'Operation Cast Lead' assault. The exhibit seeks to raise peoples' awareness of the human price of the Israeli-Palestinian conflict, and force people to question their attitudes on the conflict.  ACVG’s mission statement is:


Who are the children involved in the ACVG project?

The children in the ACVG project come from all different backgrounds; refugee camps, neighbourhoods that were destroyed as well as areas that remained untouched by the devastation of ‘Operation Cast Lead.’ All drawings in the exhibit were created by children aged five through fourteen. The artists for some of the drawings are unknown, primarily because many centres in Gaza were involved in the project, and because of problems getting the drawings out of Gaza.

What were the children asked to draw? 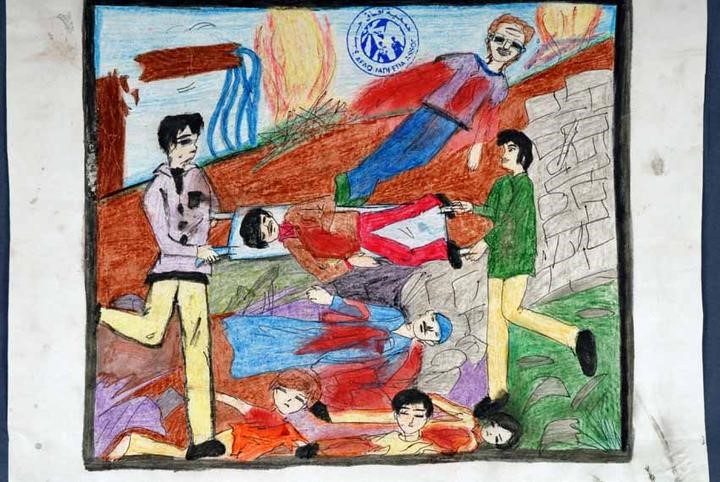 The children were asked to draw about one of three different themes for their drawings: Israel’s 21-day assault at the beginning of 2009; life in Gaza; or hopes for their future. All of the centres involved were sent copies of the project mission statement, an explanation of the exhibit, expectations of the centres and an invitation to join the project.

Although many centers were interested in participating in the project, only six had sufficient art supplies to take part and follow the project to completion. Gaza’s centres and schools are often forced to function without basic supplies like paper, pens and crayons.  These institutions also frequently function without power due to Israel’s illegal blockade and arbitrary restrictions. Because of the shortage of supplies, some centers had to be creative, reusing paper left from another activity, using the reverse side for the drawings. In another center, the children were left drawing in the dark, using only candlelight, after a power outage. .[i]

What do the drawings show that photos cannot? 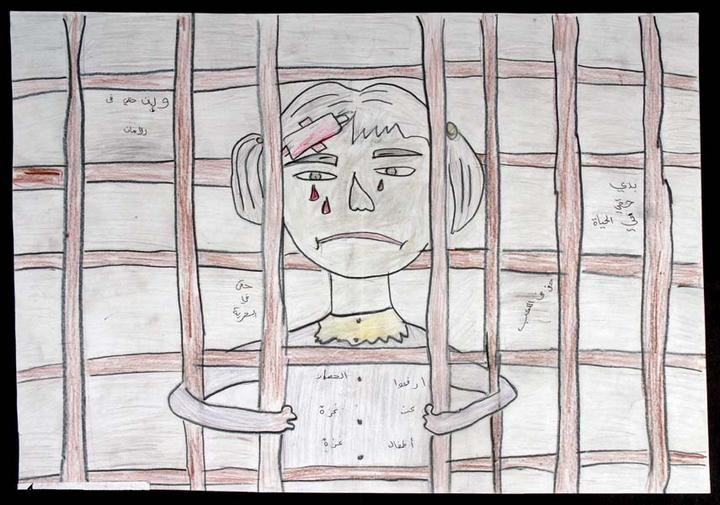 The drawings show with great detail how children in Gaza are affected by the status-quo. While a photo can convey destruction and chaos, the effect is far more powerful when drawn by a 10 year-old child. Each drawing reflects each child’s perspective of life in Gaza and the effect of Israel’s siege on his/her daily life. ACVG tells a story about children who are forced to witness horrors and how they process their experiences through art.  Aside from the raw death and destruction depicted in most images, other common themes include: crying trees and suns, schools and mosques, exposed children and parents, and terrifying war machines.  "They depict a raw emotion – the emotion of a child," says Susan, "If something doesn’t change, the children of Gaza will be very angry when they grow up. The drawings are so honest and so powerful… It is difficult to look at a child’s picture and say it's intended to be ‘anti-Semitic’ or ‘propaganda.’"[ii]

Why has CJPME chosen to exhibit ACVG?

CJPME first heard about ACVG when it was exhibited by MECA at a children’s museum in San Francisco. CJPME perceived ACVG as a creative initiative to have young people from Gaza speak for themselves through their art. Of the Exhibit, Thomas Woodley, president of CJPME says, “The Exhibition teaches about the Israel-Palestine conflict, but through the experiences and perspectives of the children.  It’s a great way to sensitize new audiences to the devastating reality faced by the Palestinians of Gaza.” CJPME expects that ACVG will have an impact on the public in a much different way than films or speakers would.

What has been the reaction to the exhibit?

'A Child's View from Gaza' has been exhibited in the USA in Vermont, Maine, Boston, New York, Chicago, Iowa and California in coordination with universities, libraries, human rights NGOs, places of worship and coffee shops.  The exhibit was scheduled to be shown in California at the Museum of Children's Art in Oakland in September, 2011 but it was cancelled at the last minute. The event was being coordinated by MECA, an organization working for the rights and well-being of children in the Middle East. According to the museum, the event was shut down due to pressure from pro-Israel organizations in the San Francisco Bay Area which described the exhibit as “a biased, one-sided perspective filled with depictions of violence [which have] no place in a community-based museum”.[iii] Ultimately, the censorship backfired as the exhibit was shown in another location in the Bay Area and drew over 1,000 viewers on its first day, partly  due to the publicity surrounding the cancellation.[iv]

[ii] An interview with Susan Johnson, coordinator of ACVG, 2012.