CJPME Factsheet 149, published March, 2012: This factsheet lays out the devastating impact of war on children in Gaza, showing the degree to which Gaza children are exposed to war, and the psychological impact it has on them, both short-term and long-term.

Psychological Impact of War on Children in Gaza

Factsheet Series No. 149, created: March 2012, Canadians for Justice and Peace in the Middle East
View factsheet in PDF format 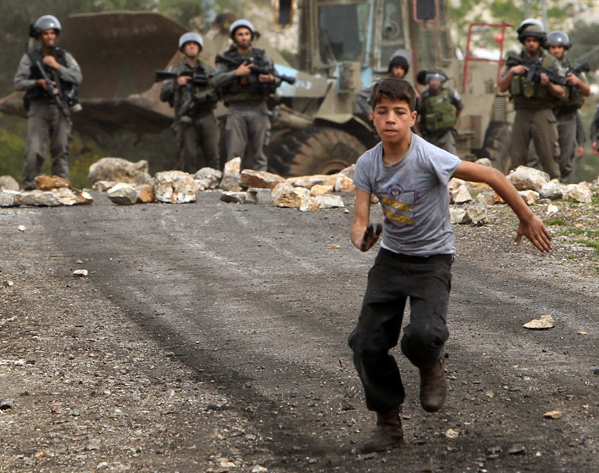 How have children in Gaza witnessed war?

On December 26, 2008, Israel launched Operation Cast Lead, a 22-day assault which would devastate Gaza and leave a humanitarian crisis in its wake.[1] In addition to widespread destruction, deaths and injuries, this assault inflicted deep psychological damage on thousands of children. Any event that overwhelms a child’s ability to emotionally cope can have a serious impact on their psychological development,[2] but exceptionally violent, frightening or prolonged events will have even deeper consequences.

Such experiences are common in war zones, but are especially damaging in areas like Gaza where civilians have been directly exposed to fighting or have been forced to cower during decades of conflict. Due to the fact that the majority of Gaza is urban and densely populated, Operation Cast Lead had widespread effects on the physical and psychological well-being of Gazans. Children were both direct victims of atrocities and witnesses to them during the assault. By the end of Operation Cast Lead, 23 percent of Gazan children had seen at least one close relative or friend killed. [3] At least 352 children were killed during Operation Cast Lead, not including those who died later from the effects of overcrowded hospitals or exposure to white phosphorus fumes.[4]

Experiences that violate “safe” spaces that children had previously considered havens are some of the most psychologically devastating. During the assault on Gaza, Israeli soldiers forced their way into homes, detained families in a single room, and intimidated and committed acts of aggression against parents. These situations transform a child’s perception of his or her safety at home, from that of being protected by their parents to feeling utterly vulnerable.

Witnessing the demolition of their homes by shelling or bulldozers, and having to flee for safety can also be traumatizing for children. During Operation Cast Lead, 69 percent of children in Gaza had to leave their homes and seek shelter elsewhere.[5] Israeli human rights organization B’Tselem reports that over 3,500 residential dwellings were destroyed, leaving 20,000 homeless.[6]

Although it is often one particular dramatic and traumatic event that triggers psychological changes in children, less dramatically stressful situations, if prolonged, can also have a lasting impact. Living in poverty, or constantly feeling fear and stress can cause lasting damage to children’s psychological development. Although Operation Cast Lead is over, there are 518,147 registered refugees still living in precarious conditions in UNWRA camps in Gaza.[7] Israeli aerial assaults continue to occur, adding new psychological traumas to those inflicted by Operation Cast Lead.

Israel’s ongoing blockade of Gaza intensifies the impact of both traumatic events and ongoing poverty by preventing necessary aid and supplies from reaching the children, and by delaying the return to normalcy.

What psychological effects has the war on Gaza had on children there?

Children in Gaza have developed psychological disorders, including post-traumatic stress disorder (PTSD), depression, and other problems at an elevated frequency consistent with the horrifying events experienced there.[8] [9] PTSD is nearly universal in Gaza, with 92 percent of all children suffering from it.[10]

As mentioned above, feeling threatened in a space that they had previously seen as safe can lead to intense feelings of vulnerability, hopelessness and desperation. When homes, schools or mosques are damaged, children reach the conclusion that they are not safe anywhere, and that their parents are no longer able to protect them. Following Operation Cast Lead, a study found that 99 percent of children felt unsafe, even at home; 96 percent felt that they could not protect themselves or their family members, and 94 percent believed that others outside the family were unable protect them as well.[11]

Children in Gaza also feel a deep loss of self-esteem due to the conflict. Most are unable to feel pride in their nation or themselves, and instead are desperate and hopeless. Those who are able to imagine a future at all think only of escaping Gaza – a dream unlikely to be realized in light of Israel’s ongoing blockade.[12]

Children in Gaza who have been traumatized by the violence of war often experience nightmares and insomnia during which they relive horrific events again and again. Many children regress and become more dependent on their parents at a time when parents have little energy to spare. Bedwetting and terror of leaving the house or of being alone are common. Gazan children also frequently feel fear, numbness, anger and guilt that they have survived or were not physically injured during Operation Cast Lead.[13]

What happens to psychologically traumatized children on reaching adulthood?

Given Israel’s blockade of Gaza, adequate treatment of psychological disorders is nearly impossible. It can therefore be anticipated that Gazan children suffering from psychological trauma will continue to experience problems into their adulthood.

If PTSD is left untreated, its symptoms can worsen and lead to other problems. A high prevalence of drug and alcohol addiction, chronic pain, self-injury, crippling fear of death, compulsiveness and personality changes are documented results of untreated PTSD.[14] Experiencing a traumatic event can permanently alter the structure and chemistry of a child’s brain, causing ongoing problems with processing fear and memories in adulthood.[15]

Psychological and behavioural problems stemming from trauma will remain common in Gaza as long as it its civilians continue to be subjected to military strikes and violence.

What is being done to help these children?

Maintaining a normal routine is one of the best ways to help traumatized children heal, but this is nearly impossible in Gaza. The majority of children in Gaza have had to leave their homes at some point to travel to a safer place, while around 55 percent are currently living in refugee camps.[17] The emotional stability and support of parents are also key to the recovery of children who have experienced a psychologically damaging event. Unfortunately, many parents in Gaza have been psychologically injured themselves and are unable to provide the necessary care.

Despite the difficulties associated with reconstruction and development in Gaza, there are several organizations working hard to help Gaza’s children to heal. The Gaza Community Mental Health Programme operates three community centres focused on providing mental health services to vulnerable groups of society, particularly women and children. They also operate a toll-free telephone counselling program, and a women’s empowerment group.[18] Another organization, the Gaza Mental Health Foundation, is an American-based group that raises funds to support the GCMHP and its programs.[19] United Nations agencies like UNICEF, the World Health Organization (WHO) and UNRWA also sponsor mental health initiatives in Gaza.

Despite the resolute efforts of these groups, mental health services in Gaza remain scarce relative to the number of people needing them, due to underfunding. The Israeli blockade exacerbates these problems. Mental health professionals are generally unable to leave Gaza for training.  As well, Israel prevents the entry into Gaza of many kinds of medications and equipment[20] needed to treat physical health problems, which further prolongs the mental health crises.

[20] “The Closure of the Gaza strip puts at risk the health of people in Gaza and undermines the functioning of the health care system.” UN Office for the Coordination of Humanitarian Affairs and Association of International Development Agencies (AIDA). January 20, 2010.