CJPME Factsheet 194, published April, 2015: This Factsheet provides information on the newly-formed Palestinian political party, The Joint List, the party's views, their popularity in Israel and their relation to the Palestinian electorate. It also examines the place of Palestinians in Israeli politics and how the Party is viewed in the West Bank and Gaza

Factsheet Series No. 194, created: April 2015, Canadians for Justice and Peace in the Middle East
View factsheet in PDF format 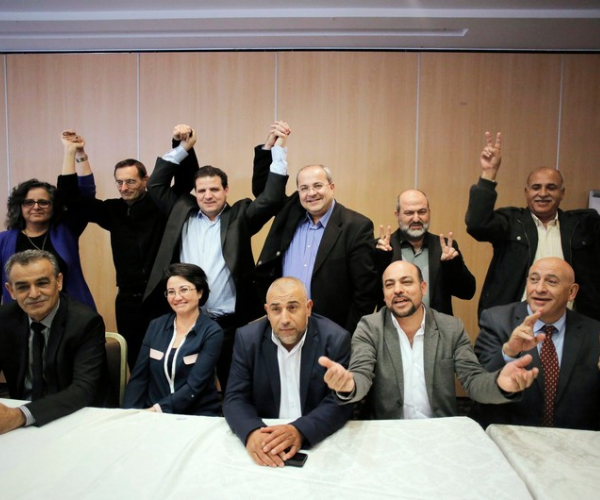 The Joint List is a coalition of Palestinian political parties in Israel that was formed a few months before Israel’s 2015 elections. It received much international attention as Palestinian citizens of Israel had the possibility, for the first time in Israeli history, to play a tangible role in the political orientation of their country.

In March 2014, the Knesset, Israel’s parliament, approved an electoral governance law, proposed by Avigdor Liberman (deputy of Yisrael Beiteinu, a far-right party), raising the electoral threshold of 2% to 3.25% of the votes. Officially, the bill’s objective was to improve the government’s ability to govern by limiting the number/proliferation of small parties in parliament. Isaac Herzog, leader of the Labour Party, has expressed concern over the governance act, holding that this type of law was motivated by a desire to exclude certain political parties and to end debate in the Knesset.[1] More precisely, Hana Sweid, MP of the Hadash, a mixed Jewish and Palestinian party with communist leanings, now part of The Joint List maintains that “The governance law disables the ideological, intellectual and political diversity within Arab society” and that the intention of Avigdor Liberman and his party was to drive the Palestinian parties out of the Knesset.[2]

Indeed, prior to the 2015 election, it appeared as though no Palestinian party in Israel would meet the electoral threshold and that as a result, none of them could have run in the 2015 elections. The Palestinian parties then agreed to form a coalition in order to maintain and even increase their presence in the Knesset. Since January 22nd 2015, The Joint List, headed by Ayman Odeh, brings together several parties and ideologies: Hadash, a Jewish-Palestinian communist oriented party; the United Arab List, an Islamist Party; Ra’am Ta’al with secularist and anti-Zionist tendencies; and Balad, a Palestinian nationalistic party.

The aims of The Joint List are mainly to 1) hold onto and gain “Palestinian” seats in the Knesset, 2) increase the political influence and the recognition of Palestinian Israeli rights, in particular the rights related to minority status and finally, 3) mobilize abstainers among Israeli Palestinians.

The Joint List, despite its diversity, has proven to be an alternative to the ultranationalist side led by Benjamin Netanyahu and to the Zionist camp led by Isaac Herzog and Tzipi Livni.[3] A commonality between the parties of the Joint List is their defence of the rights and interests of Israeli Palestinians. It positions itself as an opposition party to the government and has stated upon its creation its desire to keep out of government coalitions. Officially, the Joint List advocates the two-state solution between Israel and the Palestinians, along the 1967 frontiers, in which the capital Jerusalem would be shared by the two states.

What popular support does the Joint List have in Israel?

The Joint List primarily reaches the Palestinian electorate and the disillusioned supporters of Meretz, a left-wing party supporting the Palestinians in many of their demands in Israel.[4] Thus the electorate of The Joint List is not entirely made up of Israeli Palestinians. The Joint List’s electoral campaign of 2015 staked a lot on the Jewish electorate, especially since Hadash is a mixed party. During the March 2015 elections, the Joint List became the third largest political force in the Knesset, with 13 seats out of a total of 120, or approximately 10.5% of the votes. In comparison, the Likud, Benjamin Netanhyahu’s party, obtained 30 seats and the Zionist Union, a right-wing nationalistic party, 24 seats.

Did all the Palestinians vote for the Joint List?

Although the Joint List’s initiative has generally been well received in the West Bank and the Gaza Strip, it is worth recalling that nearly 2,5 million Palestinians living in these territories under Israeli occupation are of voting age but still unable to make their voices heard in Israeli policy.

What place do Palestinians have in Israeli politics?

How is the Joint List perceived by the Palestinians in the West Bank and Gaza?

Also, Hamas encouraged Israeli Palestinians to cast their ballot for the Joint List in the 2015 elections. In so doing, Hamas expressed hope that the Joint List would win at least 20 seats and to be able to call for an end of the occupation and of a majority representation in the Knesset.[12]

The Palestinian authority also indicated its support of the Joint List, welcoming the initiative taken by the Palestinians in Israel.[13]