Factsheet Series No. 204, created: January 2018, Canadians for Justice and Peace in the Middle East
View factsheet in PDF format 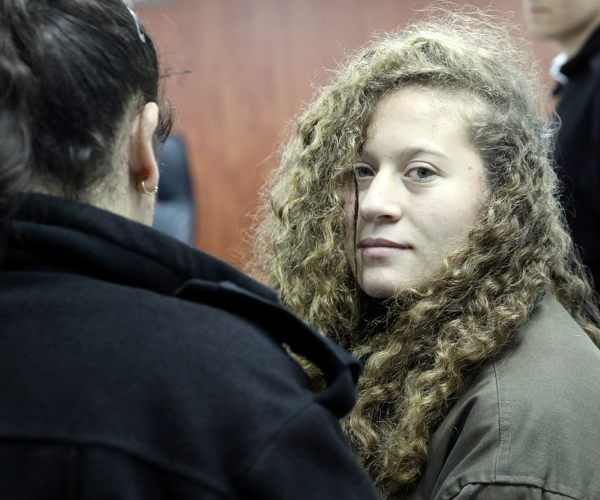 Who is Ahed Tamimi?

Ahed Tamimi is a 17-year-old Palestinian girl who was born and raised in Nabi Saleh, a village near Ramallah. Recently, she has become the subject of international outcry since her arrest by Israeli soldiers in December 2017.

While Tamimi is by no means the first Palestinian child to be arrested by Israeli forces, her case has received unprecedented international attention. The focus on Tamimi is likely due to two things: first, her striking appearance; and second, her bold and defiant manner.   Tamimi has blue eyes and long, curly blond hair which do not necessarily match the skewed Western perception of Palestinians as a “brown,” impoverished “other.” Because she physically resembles a European or American child Western media is less able to dehumanize her. Second, for as long as she has been videoed – and there are videos of her as an 11-year-old – she has fearlessly stood up to Israeli soldiers: scolding, punching and reproaching men twice her height. Viewers can see videos of Tamimi marching on the front line of the Nabi Saleh protests, waving a Palestinian flag, while singing slogans in Arabic and English. Pictures of her seem to radiate a deep strength and resolve that capture the imagination of the Palestinian resistance.

Israeli soldiers arrested Tamimi on December 19, after the release of a video showing her slapping and kicking two Israeli soldiers who were entering her family’s property.[1] Ahed Tamimi has been charged on 12 counts, including stone throwing, and could face 14 years of prison if convicted.

Why is Tamimi’s arrest contentious?

Many Israelis have expressed outrage that the teen was not arrested on the spot, claiming the soldiers should not have tolerated being slapped. Israeli Education Minister Naftali Bennett said Ahed, her cousin and her mother “should finish their lives in prison.”[2] Israeli Defense Minister Avigdor Lieberman also praised the jailing of Tamimi saying “her family had actively encouraged her actions against the IDF.”[3] Palestinians on the other hand commended her bravery in the face of two heavily armed soldiers, embracing the teen as “the symbol of the new generation standing up to Israeli rule.”[4] They lambasted the Court’s decision and called for charges to be laid against Israel before the International Criminal Court.[5]

On the international stage, only a few state officials have openly condemned Ahed Tamimi’s treatment. However, a number of human rights organizations such as Amnesty International,[6] the Office of the United Nations High Commissioner for Human Rights[7] (OHCHR) and Defense for Children International[8] have summoned the international community to denounce Tamimi’s arrest and conditions of detention.

How does international law judge Israel’s handling of Tamimi’s case?

In terms of international law, Tamimi’s arrest and conditions of detention are illegal for a number of reasons. First, “the arrest, detention or imprisonment of a child must be used only as a measure of last resort and for the shortest appropriate period of time,”[9] according to the Convention on the Rights of the Child, to which Israel is a state party. The Convention states that children should only be deprived of their liberty if they pose an imminent and significant threat to themselves or to others. Nonetheless, Israel disregarded international law by sending dozens of heavily armed soldiers to arrest Tamimi in the middle of the night, interrogating her without the presence of a relative or a lawyer.[10] Second, Tamimi’s lawyer claims she faced long and aggressive interrogation sessions where interrogators threatened her family members, who are well-known activists in the village of Nabi Saleh. Third, her detention outside of the occupied Palestinian territories violates Article 76 of the Fourth Geneva Convention, which prohibits an occupying power from transferring prisoners outside of an occupied territory.[11]

How is Tamimi’s case symbolic of Israel’s abuses against Palestinian children?

Human rights organizations have continuously condemned Israel’s unlawful treatment of Palestinian prisoners. Since 1967, Israel has operated two separate legal systems in the occupied territories. While Israeli settlers are subject to Israeli civil law, Palestinians are subject to military law, whereby an individual can be  detained for up to six months - a period that can be extended for “inordinately lengthy periods.”[12] In most cases administrative detainees are not informed of the charges laid against them. A report from 2014 noted that Palestinians continue to be exposed to methods of torture and ill-treatment during interrogation.[13] These methods included “beatings, tying prisoners in ‘stress positions,’ interrogation sessions that last up to 12 consecutive hours, depriving prisoners of sleep and other sensory deprivation, isolation and solitary confinement, and threats against the lives of their relatives.”[14] While the military court is mandated to deal with criminal and security cases, the vast majority of arrests have political motivation. In January 2018, the total number of political prisoners was 5003, including 11 Palestinian Legislative Council members, 59 women, and no less than 330 children.[15]

The Israeli military courts do little to distinguish between Palestinian adults and children. At age 16, Palestinians under the military court system are tried as adults.[16] In 2015, the “Youth Bill” legalized the imprisonment of children as young as 12 years old.[17] Once arrested, Palestinian children are subject to poor detention conditions and mistreatment by Israeli authorities. In most cases, children are denied access to a parent during interrogation. Several NGOs claimed the security services “employed abuse, and in some cases torture, to coerce confessions from minors.”[18]

In 2016, the organization Military Court Watch reported “90% of children were hand-tied, 84% blindfolded, 58% subjected to physical abuse, and 91% denied access to a lawyer prior to questioning”[19]. Stone throwing remains the most common charge levied against Palestinian children, a crime that is punishable by up to 20 years of prison.

Why should Canada be concerned about Ahed Tamimi?

Both Canada and Israel are signatories to the Convention on the Rights of the Child, the Fourth Convention of Geneva, and the UN Convention against Torture.  As such, the Canadian government is obliged to demand Israel respect its commitments under these instruments of international law.  As of early 2018, the Trudeau government had never condemned Israel’s violations of international law regarding children and prisoners’ rights.

While the Canadian government has remained silent about Ahed Tamimi, Canadian human rights organizations and United Nations human rights investigators have called on Israel to free Tamimi. Canadian UN Special Rapporteur on Israel-Palestine, Michael Lynk,  spoke in favour of this demand, adding that “none of the facts of this case would appear to justify her ongoing detention.”[20]

[7] “OHCHR calls for the best interests of the child to be primary consideration in the Tamimi case.” Office of the United Nations High Commissioner for Human Rights. January 16, 2018. Accessed February 7, 2018. http://www.ohchr.org/EN/NewsEvents/Pages/DisplayNews.aspx?NewsID=22590&LangID=E

[13] Ibid. Canadians for Justice and Peace in the Middle-East.