Factsheet Series No. 207, created: February 2018, Canadians for Justice and Peace in the Middle East
View factsheet in PDF format 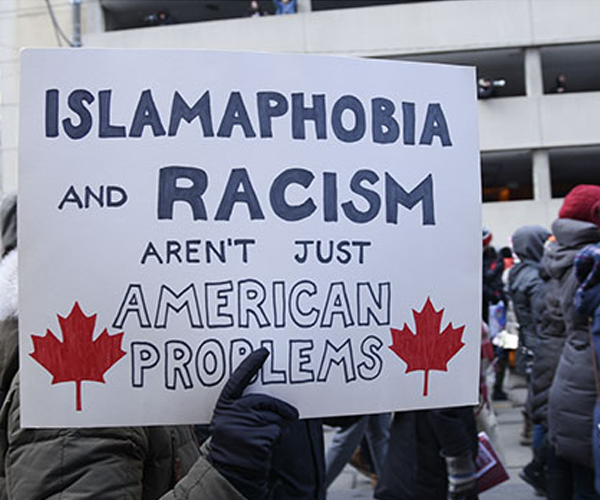 The term “Islamophobia” was first coined in 1997 as an “unfounded hostility towards Muslims, and therefore fear or dislike of all or most Muslims.”[i] However, recent scholarship has expanded this definition to include discrimination against individuals who may also be perceived as Muslim. Islamophobia can manifest itself based on dress, race, name, language, accent, or other cultural markers.[ii] In this way, Islamophobia must be understood as a racialized discrimination.[iii]

Although researchers began reporting a drastic rise in Islamophobic sentiments following the events of September 11th, 2001, Islamophobia has existed in various forms for many years. Like most racial or religious minority groups, Muslims have long been perceived as “different” from larger society, dating back to the era of European colonialism.[iv] Western knowledge about Islam as a religion and Muslims as a community was long shaped by colonial policies which presented indigenous populations as homogeneous, underdeveloped and often “barbaric”. This constructed perception of Muslims continues to be perpetuated by Western societies today.

In an era of globalization, the world is becoming increasingly interconnected, whereby international events often have lasting effects in countries where they do not even occur. Stories of violent and gruesome acts perpetrated by self-identified “Islamic” groups have appeared more frequently in media in recent years, especially since the spike in attacks on European soil.[v] The rise of the Islamic State (ISIS) and the media coverage they received has played a large role in the increasing acquiescence to negative stereotypes about Islam. While Canadians should condemn terrorist acts committed by such groups, it is unfair to penalize Canadian Muslim citizens for the acts committed by these groups. Muslim Canadian leaders have consistently condemned the actions of groups like ISIS.[vi]

In recent years, populist parties that openly entertain xenophobic ideologies dominated several elections in Western countries, including France, the Netherlands, Switzerland and the United States. In 2017, the Trump administration’s perceived hostility toward Muslim refugees led to a massive surge of asylum seekers crossing the Canadian border into Manitoba and Quebec.[vii] At that time, one-in-four Canadians believed the Canadian government should have responded to President Trump’s executive order by adopting the same policy – a temporary ban on Syrian refugees.[viii] This finding was one more instance of Islamophobia in Canadian society.

Despite the increase in Islamophobia, it tends to be an underreported phenomenon in Canada.  Many victims of Islamophobic hate crimes do not report the incidents to the police. Canadian Muslims are sometimes fearful of further victimization, believe the police will not take them seriously, or do not believe reporting these incidents to the police will make a difference.[ix] Also, there is no definition of a “hate crime” in Canadian law.  In fact, “it is up to the judge to decide whether to impose a longer sentence if she or he believes the crime of mischief was motived by hate.”[x]

Barriers to Employment: Islamophobia is particularly troubling when it threatens access to employment. Many Canadian Muslims face discrimination from government institutions in access to employment. Quebec is particularly notorious for this form of state-sanctioned Islamophobia. While the Quebec Charter of Values, proposed by the provincial Parti Québécois government, did not pass in the autumn of 2013, the proposed legislation would have severely infringed on Muslims’ opportunities for employment.  Among other things, it would have prohibited public servants from wearing religious garb while at work.[xi] Although the bill was not passed, in October 2017, Quebec successfully passed Bill 62, banning women who wear the niqab from working in, and receiving, public services.[xii] Quebec also currently has a law in effect that bans individuals who wear head coverings from running for office.[xiii] These bills underscore the degree to which currents in Canadian society have become reactive to symbols of Islam and Muslims more generally.

Barriers to integration: Another form of Islamophobia exists in terms of barriers to community integration.  For example, in the Quebec town of Shawinigan, the city council refused to rezone an industrial park to allow a mosque to open as a result of what the mayor called “irrational fears.”[xiv] Similar incidents took place in other Quebec municipalities, despite the fact that such “discrimination by zoning” is strictly illegal.[xv]

No long afterwards, a Quebec judge refused to hear the case of a Muslim woman because the woman refused to remove her hijjab.  Certainly, access to the judicial process is essential for the societal integration of any religious minority. [xvi]

What is the Canadian government doing to address Islamophobia?

Canada ratified the International Convention on the Elimination of All Forms of Racial Discrimination in 1970. In 1971, the introduction of the Canadian Multiculturalism Act aimed to preserve and enhance the cultural and racial diversity of Canadian society.

Since 2015, the Trudeau government has made attempts to raise awareness of the problem of Islamophobia. The