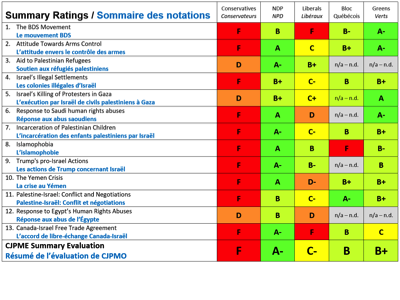 Montreal, October 2, 2019 — Canadians for Justice and Peace in the Middle East (CJPME) is pleased to release its “2019 Election Guide” analyzing the positions of Canada’s main five political parties on key Middle East issues. While party positions vary, CJPME found that most Canadian political parties fail to consistently uphold human rights in their Middle East Policy. By providing an analysis of what parties have said and done on key issues, CJPME hopes to better inform voters prior to this month’s election.

Over the past several months, CJPME carefully researched the statements and actions of Canada’s main political parties and their leaders on 13 different issues and gave them a grade.  The grade considers a number of factors, foremost their adherence to principles of international law and human rights. Some of the issues CJPME assessed include: Parties’ responses to the BDS movement, Israel’s settlements, the Yemen Crisis, and Islamophobia, among other things. The NDP scored the highest overall in CJPME’s evaluation, receiving an “A-” grade, while the Conservatives scored the lowest, receiving a failing grade. The final scores for each of Canada’s political parties are as follows:

Neither the Liberals nor the Conservatives scored well in this evaluation, especially on questions related to Israel’s human rights abuses against Palestinians, where these parties received particularly low scores. CJPME President Thomas Woodley responded, “While this evaluation will help Canadians determine who to vote for in the upcoming elections, it also demonstrates that our Canadian politicians need to ramp up their understanding of the history and dynamics of the Middle East.” CJPME encourages Canadians not only to read the 2019 Election Guide, but also to challenge political candidates to take a more principled stance on these issues.

CJPME recognizes that Canadians consider a range of issues when making their voting decisions, but encourages Canadians to factor in Middle-East policy when deciding how to vote.  This CJPME Election Guide should encourage Canadians to be informed, challenge their candidates, and vote according to the policies most important to them.