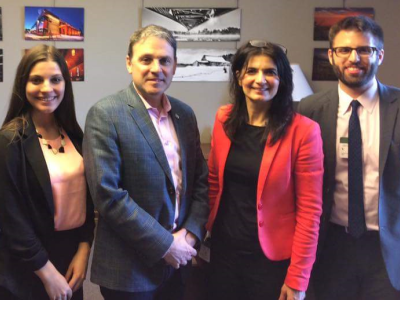 Unless we look back once in a while, we forget how far we’ve come. This is the way we feel as we consider our huge strides forward in 2017. Please review our 2017 activities below, and celebrate our many accomplishments with us!

Hopefully, you joined us in protesting Trump's outrageous, illegal and one-sided decree on Jerusalem. Like thousands of Canadians we protested in the streets, and complained to our politicians. We also launched two videos and a petition - which garnered close to 3000 Canadian signatures. We're sending the signatures and comments to the PM and federal party leaders next week! Click on the links below to see our videos!

CJPME Meets with MPs throughout the Year

CJPME representatives faithfully maintained a presence on Parliament Hill from the beginning of the year, meeting with dozens of members of Parliament from among each of Canada’s political parties. In dozens of one-on-one meetings, CJPME presented MPs with position papers that addressed many topics, including Canada’s role in the Israel-Palestine conflict, Canada’s accession to the Arms Trade Treaty, Syria, and the disturbing rise of Islamophobia in Canada, among other issues. CJPME works hard to communicate all the facts to members of Parliament, reminding them constantly of the human rights abuses faced by Palestinians, and Canada’s obligations under international law.

In early November, CJPME’s President Mr. Thomas Woodley was invited by the House Foreign Affairs Committee to testify on Bill C-47, Canada’s legislation to accede to the International Arms Trade Treaty. Such an invitation was the culmination of years of efforts to build our professional credibility and reputation on Parliament Hill. This is a file which CJPME has pushed for two years, drawing the link between the international arms trade, and much of the suffering and human rights abuses in the Middle East. CJPME was thrilled and privileged to address the full committee on this important topic.

CJPME is honoured and thrilled to have added two highly reputed Board members in recent months. First is Dimitri Lascaris, a lawyer, journalist, and activist, named as one of the 25 most influential lawyers in Canada in 2012, and one of the 50 most powerful people in Canadian business in 2013. Second is Professor Nadia Abu-Zahra, an Associate Professor of International Development and Global Studies at the University of Ottawa, where she is a member of the Human Rights Research and Education Centre. CJPME is looking forward to benefitting from their guidance and insight in the months and years ahead.

CJPME’s presence in Ottawa is recognized and CJPME has established enduring relationships with many MPs. This relationship was clear, for example, during the NDP leadership race in the summer when leadership candidates mentioned CJPME by name in the NDP leaders debates, highlighting our strong work for Palestinian human rights. In another example, NDP Foreign Affairs Critic Hélène Laverdière agreed to sponsor CJPME’s Parliamentary ePetition calling for the condemnation of Israel’s illegal “settlements.”

This past May, CJPME was instrumental in helping MP Mario Beaulieu and the Bloc Quebecois launch a parliamentary motion supporting Palestinian self-determination and statehood. CJPME was consulted on the wording of the motion, and was present at a press conference on Parliament Hill to recognize this monumental occasion. Thomas Woodley of CJPME was also invited to participate on a panel with Mr. Beaulieu following the launch of the motion.

Several times this year, CJPME met with MPs interested in Palestinian human rights to foster an environment for the creation of the Canada-Palestine Parliamentary Friendship Association, chaired by MPs Marwan Tabbara and Alexandre Boulerice. While this Association of MPs functions independently, CJPME was pleased to be able to connect several MPs with this initiative.

In September, CJPME launched a new Parliamentary ePetition as part of its Peace in Palestine campaign. This campaign is an extended effort to get Canada’s politicians to have an honest public discussion about Israel’s “settlements,” and how Canada must respond. The end goal of the campaign is to eventually push Parliament to pass a motion condemning the “settlements.” Over 90 organizations in Canada have endorsed the Peace in Palestinian campaign, including the Canadian Union of Public Employees, Idle No More, and the Canadian Labour Congress. Already at almost 4000 signatures, the ePetition has had a stronger response than more than 90 percent of other such petitions. Throughout the fall, CJPME has printed and distributed thousands of posters and flyers that have shown up across the country. The photos above depict promotional materials in Montreal, at Queens University in Kingston, and at Simon Fraser University in Burnaby, B.C. For more information, or to sign the petition, visit PeaceinPalestine.ca

CJPME's Parliamentary ePetition has garnered close to 4000 signatures from Canadians across the country. If you haven't signed, it's not too late to do so!

CJPME is constantly trying to find new ways to reach Canadians of all ages and backgrounds. Earlier this year, CJPME created a video series, “50 Years of Occupation,” that highlighted Israel’s many human rights abuses throughout their 50 year occupation of the Palestinian territories. More recently, CJPME has launched the increasingly popular “Reality Check” video series, where we highlight government hypocrisy on issues of Middle East human rights. Through each of these videos, CJPME has been able to capture the attention of tens of thousands of Canadian viewers, especially younger Canadian viewers. CJPME is working hard to reach out to the millennial generation, and inform and involve them in our human rights campaigns.

CJPME Joins Amnesty and Others in Critiquing Arms Control Legislation

Early in 2017, CJPME reached out to Amnesty International and other Canadian peace and disarmament NGOs to try to impact Canada’s flawed accession to the International Arms Trade Treaty. Together, CJPME and its NGO partners drafted a joint document highlighting our top 10 concerns with Bill C-47. We also hosted a joint press conference on Parliament Hill which received national attention!

On an ongoing basis, CJPME tries to support local human rights activists to gain greater visibility and traction for their work. In one example, CJPME developed a Website and engaging video in support of the efforts of Dr. David Kattenburg of Winnipeg and his lawsuit against the Canadian government on falsely-labelled Israeli wines. CJPME regularly sets up petitions and provides other campaign support to the many Palestinian solidarity efforts across Canada.

For years, Canada’s pro-Israel lobby groups have argued that most Canadians sympathized with Israel. Thanks to an EKOS Research poll co-sponsored by CJPME in February, we now know what Canadians really think! And the pro-Israel lobby is not happy with what we found. The results were striking: Far more Canadians have a negative view of Israel; but they perceive the Canadian government as biased toward Israel. Canadians overwhelmingly believe that criticizing Israel is not anti-Semitic, and believe that government sanctions on Israel would be reasonable. And those are just a few of the findings! See the full results on our Website.

The EKOS Research Survey co-sponsored by CJPME revealed the strong support among Canadians for greater political and economic pressure on Israel.  Above are the results of two of the eight survey questions.  All the results are on the CJPME Website.

Left: CJPME representative Grace Batchoun challenges NDP leadership candidate Jagmeet Singh on his Middle East policies; Centre: CJPME issued a comprehensive analysis of the Middle East positions of each of the four NDP leadership candidates; Right: In its analysis, CJPME scored Niki Ashton as A+, Jagmeet Singh as A-, Guy Caron as B=, and Charlie Angus as B.

CJPME has supporters of all different political beliefs, and tries to serve all its supporters by pointing out opportunities and providing useful analyses. With this in mind, we strongly encouraged progressive supporters to get involved in choosing the next NDP leader. First, when pro-human rights leadership candidate Niki Ashton was attacked by pro-Israel B’nai Brith, we encouraged our supporters to reach out and defend Ashton. Second, we encouraged Canadians whose values align with those of the NDP to vote in the upcoming NDP leadership race.

In 2015 and 2016, CJPME co-sponsored almost 10 Syrian refugee families. Many of our supporters gave money to enable this support – and we thank you. Imagine our pleasure and excitement when the first of these families arrived in Canada earlier this year. So far, three families have arrived, and we still await three more. While CJPME is not a “refugee resettlement” organization per se, we could not ignore the obvious need for Canadians to do all that they could for Syrian refugees. Thanks to our like-minded supporters who helped make this possible.

From the start of the year, CJPME repeatedly followed up with the Trudeau government to ensure that Canada’s funding to the UN aid agency for Palestinian refugees (UNRWA) continued in 2017. We sent several letters and met with MPs and officials at Global Affairs Canada. We also sent letters to every Liberal MP, to help them to understand the importance of Canada’s support for UNRWA. Our efforts came to fruition in August of this year when the government again confirmed its support of $25 million for UNRWA programs. An UNRWA official wrote to CJPME, thanking us for our “support to UNRWA, especially in recent days which has been noticed and appreciated by…UNRWA.”

Right: The first Syrian family co-sponsored by CJPME arrived in Montreal in June. Six more families are due to arrive in the coming months; Left: CJPME's efforts helped ensure another $25 million in Canadian funding this year for the UN agency for Palestinian refugees.

CJPME was thrilled to host Prof. Tariq Ramadan for a series of five talks across Canada: Calgary, Edmonton, Mississauga, Toronto, and Montreal in January. Ramadan is a Muslim philosopher, writer and academic currently at Oxford. His talks on how to create thriving multicultural communities in the West were extremely well received, and attracted crowds of hundreds everywhere he spoke.

Left: CJPME hosted Prof. Tariq Ramadan in six cities across Canada in January; Centre: CJPME made several trips to Parliament Hill in May and June to meet with Members of Parliament; Right: CJPME supported the Bloc Quebecois before it announced its motion in support of Palestinian statehood in May.

CJPME leaders have published dozens of opinion articles on various Canadian media platforms since the beginning of the year. These op-eds are an example of CJPME “reaching people where they are at,” rather than waiting for people to visit our Website or Facebook page. The articles enjoy very strong engagement – often receiving hundreds of comments, and thousands of likes and shares – and thus increasing CJPME’s visibility and reach. Our op-eds published since the beginning of the year include the following:

CJPME consistently publishes timely position papers, press releases, analyses, and factsheets on the most pressing issues facing Canada and its relationship to the Middle East. Since the beginning of the year, CJPME has addressed many key issues. Some of the recent highlights include the following: